Edit
watch 02:19
Wiki Targeted (Games)
Do you like this video?
Play Sound
“As much as the Chantry influences this office, I cannot be seen to do the reverse.”

Marlowe Dumar is the Viscount of Kirkwall, assuming power in 9:21 Dragon after Viscount Perrin Threnhold, who was eliminated for seeking to expel the Kirkwall Templar Order. Dumar himself holds power only at the sufferance of the templars, despite his political efforts to gain more relevance amongst the nobility.[1] During his reign as viscount, the Templar Order has grown extremely powerful in Kirkwall: it has become the center of Chantry strength in eastern Thedas and holds its Circle of Magi in a terrifying iron grip.[2]

The Dumars had roots in Kirkwall since the early Storm Age, though they were a relatively minor noble house until the early Dragon Age. Lord Randall was uncommon in that he did some work, personally overseeing the operations of the family's trading company on the docks. Marlowe grew up believing in the virtue of good, honest labor.

When he was twenty, he met Phyllida Bowens, the daughter of Kirkwall's foremost cartographer. The Bowenses were not noble but prosperous thanks to the cartographer's commissions from the viscount and several Vael princes in Starkhaven. She lived a few doors away from Marlowe in Hightown, and he eventually worked up the courage to speak to her. They fell in love and married shortly after. Their first child, a girl named Venetia, was born in 9:14 Dragon. She was frail and didn't thrive despite her mother and nurses' efforts. She died a month later. Phyllida's grief was deep and long-lasting. By 9:16 she was pregnant again, but the birth was once again difficult, and it became clear to the midwives that it would be impossible to save both mother and child. Marlowe would have chosen Phyllida, but she insisted that he save their son. Phyllida lived long enough to hold him in her arms and name him Seamus, after her grandfather.

In 9:21 Dragon, when Viscount Perrin Threnhold blocked the Waking Sea passage, Marlowe went to the docks and oversaw the running of the Dumars' company, finding ways for Kirkwall's trade to continue. After Threnhold was overthrown by the templars, Meredith Stannard appointed him the new viscount, much to his surprise. She said that he was different from the entitled degenerates that filled Kirkwall, that his family was humble, had never grasped for power or gold. At his coronation, she gifted him a carved ivory box containing the Threnhold signet ring, misshapen and crusted with blood and the words "His fate need not be yours" to remind him who truly held the power in Kirkwall.[3]

As Viscount, Dumar struggles to maintain order in a city riddled with political and religious tensions, without any ability to effectively enact his will. Forced to appease Meredith to avoid his predecessor's fate, under growing pressure from Orsino to grant mages more freedom, and dealing with radical mages seeking liberation by violent means, Dumar is a better negotiator than a military leader, having the unenviable task of balancing the demands and desires of so many competing factions, and ultimately pleasing no one. With the Qunari presence exacerbating the city's tensions, Dumar becomes increasingly helpless as events spiral out of his control. Weakened by personal loss and lacking the military authority to achieve results, his reputation as Kirkwall's ruler plummets as matters reach breaking point, with both Meredith and the Arishok considering him incompetent and foolish. Along with dealing with an idealist son pushing to be closer to the Qunari; against all possible Chantry wishes.

During Hawke's first year in Kirkwall, Dumar put out a bounty for the safe return of his son, Saemus. He was under the impression that Saemus was kidnapped by the Qunari. When it turned out that Saemus befriended a Qunari, he tried to make his father understand but Dumar was concerned how embarrassing it would be if it was found out that a Qunari influenced his family.

Three years later, Dumar summoned Hawke to help with the matter of the Qunari, due to Hawke's past dealings with the Arishok. However, events culminated with the death of Saemus, who was murdered by pious fanatics desperate to set the whole city against the Qunari. Dumar grieved for his son and no longer had the resolve to lead his city.

Dumar was killed by the Arishok during the Qunari attack on Kirkwall and his head tossed about his own throne room. After his death, Knight Commander Meredith tightened her stranglehold on the city, paranoid about maleficar activity. At the end of the game, the Champion can take his place as Viscount of Kirkwall, provided they side with the Templars. 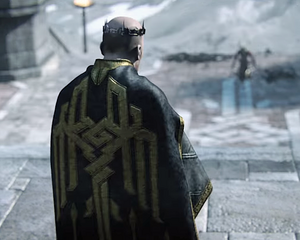 Viscount Dumar in the Destiny trailer