“We are always in battle. It is only that some of us do not always realize it.[1]”

Marjolaine is an Orlesian bard from Leliana's past. She is described in detail by Leliana if you strike up a conversation about Leliana's past once your approval rating with her is high enough.

Marjolaine met Leliana when the latter was sixteen and attending a soiree in Val Royeaux with her guardian, Lady Cecilie Vasseur. Marjolaine herself was a wealthy widow and patroness of the arts. Leliana was impressed by her and Marjolaine appeared to be as well, and soon was calling upon Lady Cecilie. As the Lady was aging, Leliana frequently entertained Marjolaine.[2]

The two grew very close. On a hunting trip, Marjolaine gave young Leliana her first bow. In teaching her how to use it during that trip, Leliana accidentally wounded a hart the hunters were tracking. Leliana was too unnerved to end the animal's suffering. She watched in amazement as Marjolaine did so, telling the girl "Never delay the inevitable. If you can strike, strike."[2]

During that same summer, Leliana visited Marjolaine at her Val Royeaux estate, and the widow began to teach her way of the bard: manipulation, subterfuge and combat. Always her teaching was subtle and disguised, easily assumed to be merely a lady's idle amusements.[2] Marjolaine was Leliana's mentor during most of her adulthood in Orlais. An Orlesian bard known to most as simply a rich widow, Marjolaine trained Leliana in the subtleties of "the Grand Game," as they referred to it. Leliana will mention in conversation with the Warden, and in greater detail if Leliana is being romanced, that she and Marjolaine were also lovers during this time.

Once Leliana's training was complete, Marjolaine then functioned as her employer, sending her on dangerous assignments to gather and plant intelligence, among other things.

In Marjolaine's company, Leliana met Tug and Sketch, and traveled with the pair across Thedas. Leliana's enjoyment of the freedom of these days dovetailed Marjolaine's increasing fear of her student's growing skill and potential to strike at her.[3]

Ultimately, Leliana discovered some of the documents she was planting for Marjolaine during a job in Denerim were sensitive Orlesian material and therefore possession of them was treasonous. Treason was punished heavily in Orlais. Out of concern for her mentor, she confronted Marjolaine, asking her to steal back the material, only to be betrayed by the bardmaster's scheming into the hands of Harwen Raleigh, the latter's intended client.

Marjolaine struck first as was her nature, and had the trio framed, arrested and abused.[3]This ultimately caused Leliana to discard her past as a bard and take refuge in the Lothering chantry. However, Marjolaine continued to watch Leliana from afar, eventually sending assassins after her.

Marjolaine is featured in Leliana's recounting of the falling out between the two. She returns to the group intermittently while pursuing side objective in Denerim simultaneously. She returns repeatedly to give instructions to Leliana, Tug and Sketch.

When Marjolaine first splits from the party, she tells them to enjoy their evening and promptly wanders off to take care of a Denerim Captain of the Guard who somehow wronged her. She leaves him passed out in the street in front of the Gnawed Noble Tavern. Leliana can then "assist" her by leaving incriminating evidence around him.

Marjolaine is next seen seducing one of the elite guards inside of the Arl of Denerim's Estate, evidently to give Leliana's group the time to plant the papers. This is when Leliana discovers the papers bear the Orlesian military seal, and that what they are doing is high treason. When Marjolaine regroups with them, Leliana mentions it, but is brushed off in favor of leaving the estate quickly.

Upon reaching the safehouse, Leliana must confront Marjolaine about retrieving the papers. Marjolaine has a number of responses, but she will agree to do so without too much argument. However, once they return to the estate, the alarm goes off and Marjolaine quickly leaves the group to draw some guards, leaving the rest of the group to fight their way out.

As their group makes it out of the building, Leliana worries Marjolaine did not make it out, but then sees that she is unharmed. Marjolaine soothes her--and then stabs her in the stomach, just before the Guard Commander--the one Marjolaine seduced earlier--appears.

Marjolaine is encountered again with Commander Harwen Raleigh, the person receiving the military intelligence. After Leliana kills him, Marjolaine comments that 'the game' is more fun when it's personal, and that she knew Leliana would turn on her eventually, so she did it first. They part ways, not meeting again unless Leliana becomes friends with the Warden.

Leliana tells the Warden, once at high enough approval, that Marjolaine framed her by doctoring the documents to make her look the traitor. She was captured by the Orlesian guards. She escaped from cruel treatment at their hands and fled across the Wilds to Ferelden.

Upon defeating the assassins sent after Leliana, the Warden and Leliana can confront Marjolaine at her residence in Denerim's market district. Marjolaine will admit that Leliana has knowledge that she can use against her, and for her own safety, she cannot let Leliana be. She had been watching Leliana, and when she saw Leliana leave the Lothering cloister, she assumed it was to enact a plan of revenge against herself. Leliana and the Warden can explain that they are on a mission to defeat the Blight and have no interest in Marjolaine, but Marjolaine will not believe either of them. She will try to convince the Warden that Leliana should not be believed; that Leliana will use the Warden because she enjoys "the game," and that that is a part of her that cannot be changed or denied.

Depending on the Warden's responses, Leliana will either:

After this, Leliana becomes distracted by the encounter (see Leliana's Past for details). According to the epilogue, Leliana will return to Orlais in order to seek out Marjolaine if the bard master's life is spared and Leliana is not in love with the Warden.

This section contains spoilers for:
Dragon Age: The Masked Empire.
Empress Celene I refers to Marjolaine in conversation with Leliana, recounting a remark the bard once made to her. She then notes without remorse that she heard Marjolaine perished in Ferelden during the Fifth Blight.

The Marquis of Serault may choose to blackmail Divine Justinia V with Marjorlaine's name to gain the Divine's favor.

You ultimately have the choice of either attacking Marjolaine or telling her to leave. If you tell her to leave, you will still get some good items, located in the chest in the bedroom (including Marjolaine's Recurve).

Marjolaine is a bard and as such buffs herself and her allies with song. She also possesses the bard skill Distraction and is immune to Dirty Fighting.

Marjolaine hits very hard for a rogue, even if not in a position to backstab, so try to limit her damage in any way possible. Penalizing her attack through skills such as War Cry or Crippling Shot is very effective, as is boosting your tank's defense - Heroic Defense and Glyph of Warding are excellent choices.

Aside from Marjolaine herself, she also brings along several normal rank enemies, including heavily armored guards that are a nuisance but not a major threat, and two mages. These enemies pour from both sides of the room at the initiation of combat. Have your tank gain Threat - Taunt works well - then quickly dispatch the mages, as their spells buff Marjolaine and can wreak havoc on your party. However, note that there are traps in front of each door that the mages stand in.

A good strategy is to retreat to the room where you fought the first two guards. This causes the mages to follow you, and gets all your targets in a tightly knit group where they are more vulnerable to spells and abilities such as Chain Lightning and Scattershot. Often Marjolaine will simply activate the level 4 Bard talent: Captivating Song, and let her guards do the rest. Even though she is paralyzed for the duration of the fight it can still be easy to die. The best way to counteract her Captivating Song is to simply have Leliana use it. That way Marjolaine's bodyguards will also be slowed down enough for your tanks to kill them first. Then you can take out Marjolaine at your leisure. 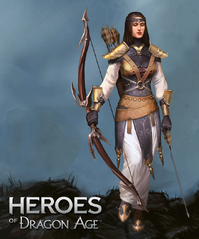 Artwork of Marjolaine from Heroes of Dragon Age