“I won my freedom, and with it the right to declare my hatred of you, of Tevinter, with full throat.”

Marius is a hunter from the Tevinter Imperium, specializing in assassinating mages.

For the short story that takes place after the events of Dragon Age II and just before Dragon Age: Inquisition, see Short Story: Paying the Ferryman.

Marius was previously a slave in the service of Magister Erasthenes in Minrathous where he served as one of Erasthenes' bodyguards. While there he also became close to a fellow slave, Calpernia. Marius' skills in combat, however, were apparently being wasted as a mere bodyguard and eventually he was sold to Nenealeus, a trainer who instructed the finest fighters in the city.

Marius successfully assassinates a blood mage in the settlement of Hercinia in the Free Marches, despite the dead mage's transformation into an Arcane horror. Before he can depart, Marius is approached by Flavius, a slave in the service of Magister Illeneva. The Magister has learned of a group of blood mages sacrificing children to fuel uniquely powerful blood magic rituals in Tevinter and enlists Marius to destroy the group. Despite his misgivings about returning to Tevinter, Marius and Tessa travel to the site of the ritual, a set of ruins in the Valarian Fields just north of Minrathous. At their heart, Marius encounters Flavius himself, accompanied by a whole cohort of Tevinter soldiers, and led by Radonis, Archon of the Imperium.

Marius bluntly refuses Radonis' offer of work but is eventually compelled to relent by Tessa. Radonis reveals that the targets he wants assassinated are senior members of a cult known as the Venatori. Marius kills Corinnia Crallius and Paulus Nimian while Tessa slays the other target. Marius prepares to kill the final target, but he discovers that it is his former lover, Calpernia. Marius refuses to assassinate her and with Calpernia, and the Venatori's aid, Marius and Tessa flee to the Frostback Mountains in southern Thedas. As Marius and Tessa dispose of another squad of mercenaries sent to kill them by Radonis, the duo stands dumbstruck as the Breach opens up above them.

In the months following the Breach, Marius and Tessa help fight off Demons spawning from the various Fade rifts while simultaneously attempting to evacuate as many civilians as possible. After one particularly dangerous battle on a nearby farm, Marius and Tessa retreat to a village to recuperate. Marius passes out from exhaustion, unaware that at that moment, Tessa is being confronted by Charter, on behalf of the Inquisition.

Now part of the Inquisition, Tessa and Marius have been sent to the Hissing Wastes to deal with the Venatori excavating the ruins there. Unable to deal with the problem on their own, as the Venatori have reinforced their position since the Inquisitor's visit, Tessa asks Charter to send additional support. This support comes in the form of Dorian Pavus and some of the Bull's Chargers led by Krem. Their primary target is a camp of fifty Venatori, too many for them to take head-on. Before the fight, Dorian insists on having an open conversation about the fact that he is a Tevinter mage and Marius a former slave, specifically a perrepatae, a slave trained to kill mages. Marius says that he does not hate mages, but that it was Magister Nenealeus who made him a mage-killer. Dorian seems satisfied by his answers. To provide a distraction for Tessa to free the captive slaves, Marius drinks a fire resistance tonic from Stitches and Dorian sets him aflame. He successfully attracts the attention of the Venatori by pretending to be a demon.

Once all the slaves are clear, Rocky, the Chargers' sapper, brings the cliff wall down on the camp, killing the remaining Venatori. When rocks threaten to crush Marius, Dorian casts a barrier that saves his life. They part on friendly terms. Tessa and Marius then return to Charter in one of the Inquisition's strongholds, only to find Sister Nightingale waiting instead, saying that the Inquisitor requires their assistance.

They arrive at Skyhold only to find that the Inquisitor and their army have already left for the Arbor Wilds. While Tessa and Marius are killing time in the Herald's Rest, they hear an explosion in the distance, and come out to find that Corypheus has reopened the Breach over Haven. The Inquisitor and the Inner Circle head to the Temple of Sacred Ashes. In the meantime Charter, with whom Tessa has started a romantic relationship, explains that they are needed to clear a route up to the ruins of the temple to provide the Inquisitor with reinforcements. Donal Sutherland's company is to go with them.

When they reach the caves, they find them filled with many demons, including a massive Pride demon. Shayd jumps on the demon's back with her daggers; Tessa, anticipating what will happen next, pushes her away and takes the shock meant for her. When the demon grabs her to finish her off, an enraged Marius rallies Sutherland's company and finally kills the demon by stabbing it through the mouth, saving Tessa.

They exit the caves with Sutherland's company to meet up with the Inquisition's forces. As they look upon the two dragons fighting overhead, they take satisfaction in knowing they helped save the world.

This section contains spoilers for:
Dragon Age: Knight Errant.
Marius and Tessa were sent to Starkhaven to steal a journal containing research on red lyrium from Sebastian Vael. They failed in their mission and were captured by his men, getting injured in the process. Though Sebastian has refused to stoop to torture, they are interrogated daily for several hours. According to Varric, they have already been imprisoned for quite some time, but have not given up the Inquisition. The Inquisition is eager to get them out of prison, especially because Tessa's relationship with Charter is still ongoing, and hires Vaea to break them out of jail. With the information and cover provided by Varric Tethras and the Inquisition, Vaea successfully gets them out of prison on the night of Sebastian's birthday party. After she accompanies them to the carriage that will safely take them to Kirkwall, Vaea decides to finish their mission.

This section contains spoilers for:
Dragon Age: Deception.
As Ventus falls, Marius and Tessa clear a path to facilitate the escape of Ser Aaron, Vaea, Francesca, Calix, and Autumn.

In their mission to find Castellum Tenebris and the red-lyrium weapon, Marius, Tessa, Vaea, and Ser Aaron attack the Qunari pursuing Cedric Marquette, fleeing from Carastes with an artifact he was hired to recover by Magister Danarius. After Francesca Invidus kills the remaining half-dozen Qunari with a single spell, Marius remarks that he'd heard rumors of her powers. As Francesca, Vaea, and Autumn leave for Fort Viridan, the rest of the group keeps following Marquette's caravan to Tenebris.

On the way to the fortress, Marquette meets with Magister Nenealeus, Marius' former master and the one who made him a mage-killer. They test the sarcophagus on a human subject; the man, wraithlike and glowing blue, attacks Ser Aaron's group as they attempt to follow the caravan. Unstable, he explodes soon after. They are later attacked by more Qunari and unstable test subjects, a fight in which Marius also participates. He's part of the final group that heads towards Tenebris.

While Tessa scouts around Neromenian for information on how to infiltrate Castellum Tenebris, the rest of Ser Aaron's group waits in a tavern. Vaea, concerned about Ser Aaron's state of mind, asks Marius whether killing someone ever gets easier. Marius replies that it does.

Later on, Marius acts as a lookout while Fenris, Vaea, and Autumn interrogate Tractus Danarius to find a way into his fortress. After obtaining the information, and as the Qunari invade the city, he heads towards Tenebris with the rest of the group, leaving Tractus alive but tied up in his room.

Thanks to Vaea's acrobatic skills, the group is able to infiltrate the castle and make their way to its courtyard, where the ritual to empower Shirallas with red lyrium will take place. However, they find heavier resistance than they'd expected: in addition to Nenealeus, Cedric Marquette, Shirallas, and the Venatori, the courtyard is also defended by a high dragon. The group's attempt to stop the ritual is further disrupted when the Qunari start subjecting the castle to heavy bombardment. Marius confronts his former master, Nenealeus, but is unable to stop him from unleashing the high dragon. Ultimately, though the group manages to slow Shirallas down, he enters the sarcophagus and emerges from it covered in red lyrium markings. During the ensuing fight, Tessa, Marius, and Vaea focus on Nenealeus. However, Tessa is knocked unconscious by Shirallas before she can deal Nenealeus the final blow, leaving Marius and Vaea to face the magister alone. Marius attacks him head-on, sustaining some damage from Nenealeus' magic, to allow Vaea to sneak behind him and stab him in the neck.

After Nenealeus and Shirallas' defeat, Tessa and Marius part from the rest of the group. Tessa says they should be proud of all they've accomplished while Marius insists that it was simply luck. 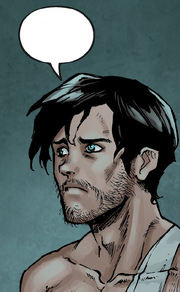 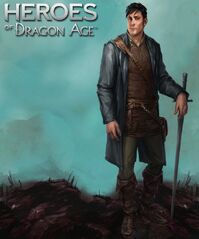 Artwork of Marius in Heroes of Dragon Age