watch 03:03
The Loop (Games)
Do you like this video?
“There are few things in this world more powerful than a promise kept. Remember that. ”

Keeper of the Sabrae clan

Marethari is the Keeper of the Sabrae clan, the clan of the Dalish Elf Warden.

She is preparing her clan to flee north into the Free Marches, both in response to warnings from Duncan about the impending Blight and tensions with a neighboring human settlement.

Flemeth will ask Hawke to deliver an amulet to Marethari and the latter will ask Hawke to perform a ritual involving Merrill as well. Strangely, Marethari had expected Hawke. The ritual involved resurrecting Flemeth, should she had met her death at the hands of the Warden. After the ritual is done, Marethari asks Hawke to take Merrill back to Kirkwall but doesn't specify why. When she asks for the Champion to look at him closer, she will tell a different statement as to match the Champion's personality.

It later turns out that Marethari sent Merrill away because she had been trying to repair the Eluvian. But since the shard fragment she kept contained the darkspawn taint, she learned blood magic from a demon imprisoned at the top of Sundermount, in order to purify it. Marethari will continue to discourage Merrill from her attempts to fix the Eluvian but will not stop her First from continuing on with her quest.

In Act 2, Marethari is contacted by Arianni, a Dalish elf living in Kirkwall, for help with her human son, Feynriel. Marethari identifies Feynriel as a somniari, a dreamer who can affect the Fade and the people in it. She prepares a ritual for Hawke to go into the Fade and save Feynriel from the demons seeking to possess him. But she warns Hawke that if Feynriel can't be saved, then he'll have to be made Tranquil, rather than an abomination.

If Merrill is allowed to fix the Eluvian, she will go to the Pride Demon who first helped her discover its secret to finish the job. Marethari will take the demon within herself, claiming that if Merrill had completed the Eluvian, then the demon would've used it to escape its prison. If Merrill's quest is pursued to this point, there is no way not to kill Marethari. When this Demon is defeated, it is revealed she does this because of her love for Merrill and hope that she will change her ways. 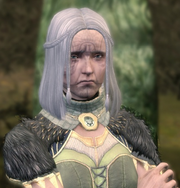 Marethari in Dragon Age: Origins
Add a photo to this gallery
Retrieved from "https://dragonage.fandom.com/wiki/Marethari_Talas?oldid=391239"
Community content is available under CC-BY-SA unless otherwise noted.