watch 02:39
The Loop (Games)
Do you like this video?
“There are few things in this world more powerful than a promise kept. Remember that.”

Keeper of the Sabrae clan

Marethari Talas[1] is the Keeper of the Sabrae clan, the clan of the Dalish Warden.

In her youth she was First to the Keeper of the Sabrae clan, and married to his Second, Sarel.[1] At the time, her clan kept camp in a remote part of the Frostback Mountains. In the winter of 8:82 Blessed, they were attacked by Avvar warriors. Sarel was killed and the Keeper was badly wounded in this attack, along with a number of other Dalish. With little choice, Marethari led the clan into the lowlands of Ferelden. There she sought out Flemeth, who extracted a promise of future help from her in return for the slaying of the Avvar tribe by Sylvans.[1]

In 9:30 Dragon, Marethari is preparing her clan to flee north into the Free Marches, both in response to warnings from Duncan about the impending Blight and tensions with a neighboring human settlement.

After Duncan brings a comatose Mahariel back to the camp, Marethari uses her healing to keep Mahariel stabilized until they awake two days later. With Tamlen still missing, she asks Mahariel to look for him with her apprentice, Merrill. Marethari may also be persuaded to allow Fenarel to join them in their search.

When they return with Duncan but no sign of Tamlen, Duncan informs her that Mahariel is infected with the Darkspawn taint and only unique Grey Warden training can cure them. With her blessings, Marethari gives the new Warden-recruit her Keeper's Ring as a parting gift.

Also, if the Warden makes the ultimate sacrifice, Marethari is present in the Epilogue, and is told that the Dalish are officially given their own lands near Ostagar.

Flemeth will ask Hawke to deliver an amulet to Marethari and the latter will ask Hawke to perform a ritual involving Merrill as well. Strangely, Marethari had expected Hawke. The ritual involved resurrecting Flemeth, should she had met her death at the hands of the Warden. After the ritual is done, Marethari asks Hawke to take Merrill back to Kirkwall but doesn't specify why. When she asks to look at Hawke more closely, she will tell a different statement as to match their personality.

It later turns out that Marethari sent Merrill away because she had been trying to repair the Eluvian. But since the shard fragment she kept contained the darkspawn taint, she learned blood magic from a demon imprisoned at the top of Sundermount, in order to purify it. Marethari will continue to discourage Merrill from her attempts to fix the Eluvian but will not stop her First from continuing on with her quest.

Marethari is contacted by Arianni, a Dalish elf living in Kirkwall, for help with her elf-blooded son, Feynriel. Marethari identifies Feynriel as a somniari, a dreamer who can affect the Fade and the people in it. She prepares a ritual for Hawke to go into the Fade and save Feynriel from the demons seeking to possess him. But she warns Hawke that if Feynriel can't be saved, then he'll have to be made Tranquil, rather than an abomination.

Whether or not Merrill is allowed arulin'holm to fix the Eluvian, she will go to the Pride Demon who first helped her discover its secret to finish the job. Marethari will release and take the demon within herself, claiming that if Merrill had completed the Eluvian, then the demon would've used it to escape its prison. If Merrill's quest is pursued to this point, there is no way not to kill Marethari. When this Demon is defeated, it is revealed she does this because of her love for Merrill and hope that she will change her ways. 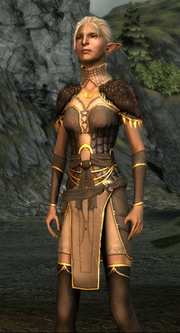 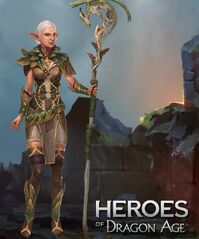 Artwork of Marethari from Heroes of Dragon Age

Artwork of Marethari's tier progression in Heroes of Dragon Age

Retrieved from "https://dragonage.fandom.com/wiki/Marethari_Talas?oldid=881108"
Community content is available under CC-BY-SA unless otherwise noted.