Major Upgrades is a collection in Dragon Age: Inquisition.

The collection triggers by acquiring three requisition recipes found on the desk in the Inquisitor's quarters at Skyhold. The recipes unlock the following three side quests:

The Inquisitor's Quarters are part of the second stage of Skyhold's renovations and as such can only be entered after leaving Skyhold once and returning. This can be done by either physically traveling to another area via the World Map or conversing with Solas using the: [Special] "tell me more of yourself." A scene will trigger with Solas taking the Inquisitor to Haven via a dream (see Solas' approval page for this option's prerequisites).

The journal entry for this collection appears only, after one of the upgrades has been performed. Thus its initial tally will be 1/3. Certain upgrades may be synchronized across playthroughs using the Golden Nug.

Note: The upgrades are irreversible, so you may wish to save the game before choosing one in case you don't like your selection.

Once the required requisition item is crafted, select an upgrade at the upgrade marker in Skyhold's garden, next to the well:

Invest in the garden space to increase utility while reflecting the Inquisition's needs. Increase the ability to grow herbs, or create a Chanrty space to gather resources from the faithful. Reward: +1 Power

Note: Either option below will unlock codex entry: Skyhold Garden; however, see Bugs for potential issues that may arise with the option selected.

Chantry Garden
– Reverence and Reflection –
Upgrades the garden to a chantry, bringing hope to all who seek it. A functional upgrade that brings a potential resource gain from the inspired, including gold from tithes.

Unlocks:
Note: Despite its description, the Chantry Garden does not produce extra resources or gold for the Inquisitor's use.

Herb Garden
– Utility and Comfort –
Upgrades the garden by committing the space to simple greenery and cultivation. A functional change that allows more herbs to be harvested.

Unlocks:
Note: Visually there is no real difference between the before and after of this upgrade; most noticeable are the addition of the extra herb pots.

Once the required requisition item is crafted, select an upgrade at the upgrade marker on the stairway leading up towards Skyhold's main hall:

Upgrade the courtyard to cosmetically reflect the Inquisition's focus. Invest here to select between the infirmary space or sparring grounds.

Infirmary
– Caring and Support –
A cosmetic upgrade that declares the Inquisition's promise to be both welcoming and protective for all who seek its support.

Sparring Ring
– Skill and Dedication –
A cosmetic upgrade that declares the Inquisition's investment in the recruitment and training of its soldiers, so that all who wish to fight are put to their best use.

Once the required requisition item is crafted, select an upgrade at the upgrade marker on the battlements, just east of Cassandra near the armory (take the stairs upward towards Cullen), see Gallery below:

Restore and Improve the large tower for an imposing cosmetic change. Invest in this upgrade to choose between a Mage or Templar tower. Reward: +1 Power

Mage Tower
– Cunning and Influence –
A cosmetic upgrade that declares the Inquisition's commitment to careful magical study. Skyhold's mage tower will be the envy of any Circle.

Templar Tower
– Strength and Preparation –
A cosmetic upgrade that shows the commitment to the utility of vigilance. The tower becomes a templar hold to rival any in southern Thedas. 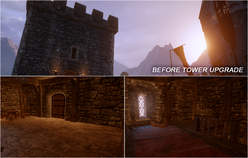 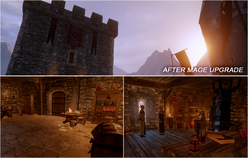 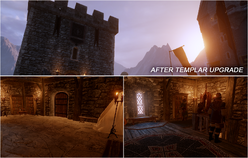