Edit
watch 02:19
Wiki Targeted (Games)
Do you like this video?
Play Sound
“I loved Her too, but what man can compare with a god?”

Maferath was an Avvarian leader of the Alamarri armies, and the mortal husband and betrayer of Andraste.

Maferath was born as an Avvar[2] when the Avvars were still part of the Alamarri tribes. His parents, Heggar II and Thelois, were both powerful Alamarri. Through marriage they established a powerful tribe controlling a majority of today's eastern Ferelden. Before they died of a common sickness, they managed to train their son as a skilled tactician and general.[3] His childhood friend, Havard, became his second in command.

In -187 Ancient,[4] he married Andraste, the daughter of Elderath, the chieftain of an Alamarri tribe, whose lands spread across the modern Free Marches and Nevarra, and northern modern Ferelden. Andraste was kidnapped by slavers sometime after their marriage; her father was killed in the raid. Upon Elderath's death, Maferath inherited his lands through marriage with Andraste to establish the biggest Alamarri tribe the world has seen, covering most of modern Ferelden, Nevarra, and the Free Marches. However, Elderath's people were only loyal to Maferath through Andraste, and would only follow him once he negotiated for her release with the Tevinter slavers who held her.[5]

Maferath had three sons by his concubine, Gilivhan: Isorath, Evrion, and Verald. It was common practice for Alamarri men to take women as concubines along with their wives, and as it was believed that Andraste was too weak to bear children, Maferath took Gilivhan as his concubine to provide him with heirs. After Gilivhan died, Andraste raised the three sons as her own. Later in life, Andraste proved to be fertile after all, as she bore Maferath two daughters: Ebris and Vivial.

After Andraste's captivity, she and Maferath led their people in war against the Tevinter Imperium. Though he was a general in his wife's army and instrumental in the victory at the Battle of Valarian Fields, Maferath eventually betrayed Andraste and sold her to the Magisters in exchange for keeping the lands that Andraste had conquered from the weakened Imperium. According to the Chantry, Maferath betrayed his wife because he grew tired of being second to the Maker in Andraste's eyes. However, historians believe that he betrayed Andraste in order to consolidate the lands she had conquered to hold back Tevinter.[6][7]

After his betrayal, Maferath dispersed his lands to his three sons while he returned to rule Ferelden. When Archon Hessarian converted to the Chant of Light and publicly revealed Maferath's betrayal, the barbarians that had followed Andraste quickly abandoned him and his tribe eventually crumbled. In the end, Maferath was killed by his own sons.[8][9]

Because of the betrayal of Andraste, Maferath's name has become synonymous with treachery, and is sometimes referred to as "the Betrayer".

Maferath is one of the eight spirits the the Warden encounters in the Gauntlet during the quest A Test of Faith. In order to advance the quest the Warden will need to answer the following riddle proposed:

"A poison of the soul, passion's cruel counterpart; from love she grows, till love lies slain. Of what do I speak?"

Codex entry: The Canticle of Maferath

Codex entry: Not of Heroes: Maferath and Sacrifice

Codex entry: Not of Heroes: The Death of Diversity 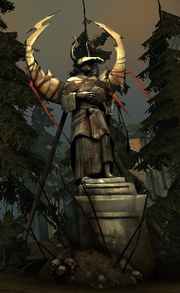 Statue of Maferath in the Wending Wood in Dragon Age: Origins - Awakening. 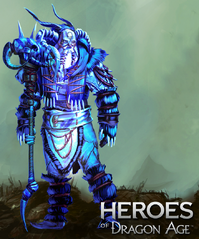 Artwork of Maferath in Heroes of Dragon Age 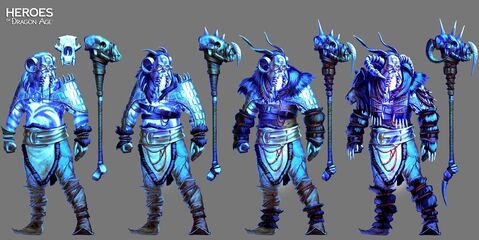 Artwork of Maferath's tier progression in Heroes of Dragon Age