watch 02:39
The Loop (Games)
Do you like this video?
“I should take you home and have you spanked.”

Maevaris was born to Magister Athanir Tilani. Though she was called male at birth, Maevaris identified as a woman and started openly living as one at the age of fifteen, which caused a massive scandal in Tevinter. Her father, who had permitted her to do so, in part because he was unwilling to lose his only heir, was considered too inoffensive and well-connected to be driven out of the Senate. Athanir was a kind and gentle man, often used and discarded by his supposed allies in the Magisterium. He was arrested and subsequently executed by Imperial templars in 9:32 Dragon. Maevaris was convinced that this was the result of her father becoming involved in a scheme he didn't believe in and then being abandoned by his allies when it went awry. She quietly took her revenge, though it was still enough for many to realize that Maevaris would not be as tractable as her father had been. This made her enemies, enough that her inheritance of her father's seat in the Magisterium was called into question.

The Tilani family made up for its lack of political clout with a considerable fortune, the result of long-standing ties to the dwarven Ambassadoria. Maevaris forged an alliance with Thorold Tethras, the dwarven merchant and representative of Orzammar, and by 9:35 Dragon she had successfully outmaneuvered her opponents and claimed her inheritance. She had also promised her hand in marriage to Thorold. Though they were never officially married, their union was universally recognized as being a sincere and affectionate one. When he died of an accidental fall while visiting Minrathous in 9:37 Maevaris inherited all of his considerable fortune as well as his contacts in the Ambassadoria. Thorold's death was rumored to have been the doing of Maevaris' enemies, and she is said to have spent the following year of mourning exacting quiet vengeance.

Maevaris is a magister of unique reputation. She walks the balance of fear and respect and few who oppose her dare do so openly.[1]

Dragon Age: Until We Sleep

The Qunari assault Ath Velanis at the command of their new Arishok, led by Alistair and Isabela as they confront Aurelian Titus. Meanwhile Varric infiltrates the fortress undetected and searches for Maric Theirin. While there he liberates Maevaris Tilani who had been taken prisoner and tortured by Titus. She then reveals to Varric Titus' scheme to restore Tevinter to its former glory and directs him to the laboratory where King Maric is most likely being held.

Varric's attempt to free King Maric from the Magrallen causes everyone to be pulled into the Fade. Varric finds Maevaris in the Fade, reunited with her deceased husband Thorold and being catered to by male servants in a lavish pool. Maevaris is well aware that it is all just an illusion of the Fade, but delights in indulging in the dream anyway. To Varric, she reveals Titus' plan to use the Magrallen to shape the minds and spirits of Thedas in order to brainwash the common folk so that the mages can rule the "ungifted" with impunity and gratitude. Varric resolves to stop him and asks Maevaris for her help. Maevaris is content to indulge herself in the Fade, but after being reminded of the suffering she had to endure as Titus' prisoner, she becomes motivated to stop him as well.

Maevaris travels with Varric to rescue his other friends from the illusions the Fade has seduced them with. They liberate Isabela from her Fade nightmare and convince Alistair and Maric to help them kill Aurelian Titus. Maevaris opens a portal to allow Maric to attempt to ambush Titus while Alistair, Isabela and Varric distract him, as well as conjuring a henge to protect Maric from Titus' demons.

After fleeing the Fade and killing Titus, she joins the others in the Ath Velanis laboratory, where they witness Maric in a weakened state, kept barely alive by the Magrellen. Maevaris states that she has heard rumors about the Dalish and a magister exiled to the Anderfels, and the ability to graft a spirit onto the flesh to restore life, but it is a magic she has little knowledge of. At Varric's behest, Alistair destroys the Magrallen, killing Maric.

The Inquisition can aid Maevaris in her bid to convince the Magisterium to condemn the Venatori and further erode Tevinter support for the cult. Afterwards they may assist Maevaris in mitigating potential counter-attacks.

An ambient conversation between Varric and a Skyhold runner shows him receiving a letter from Maevaris. Unlike most of the other mail he receives, he acknowledges that he will actually read this one.

Luck in the Gardens
With Dorian Pavus, Maevaris has been keeping an eye on some of the Magisterium's scoundrels and trying to win a few over to their cause.

She participates in the battle against the Cekorax, a new sort of monster that beheads its victims, with Dorian, Hollix, and Mizzy. 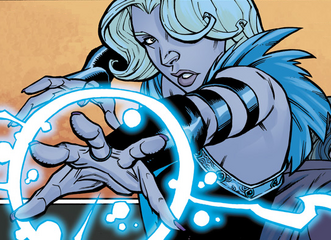 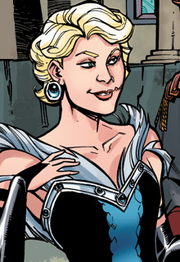 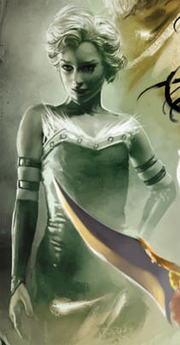 Maevaris as depicted on the cover of Dragon Age Library Edition vol. 1 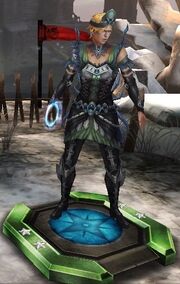 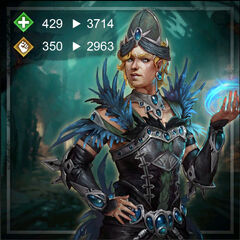 Retrieved from "https://dragonage.fandom.com/wiki/Maevaris_Tilani?oldid=889713"
Community content is available under CC-BY-SA unless otherwise noted.