“Fereldans are a puzzle. As a people, they are one bad day away from reverting to barbarism... if you insult their dogs, they are likely to declare war.”―Empress Celene I [1]

Mabari war hounds are a breed of intelligent dogs magically created by mages. Some say the mages of the Tevinter Imperium brought the mabari to help subdue the local barbarian tribes of Ferelden centuries ago, but the dogs eventually defected to the barbarians. Whatever their origins, Fereldans and their Alamarri ancestors popularized the mabari as attack dogs, status symbols, and lifelong companions.

Each mabari chooses their master for life in a process called imprinting. Although fierce combatants, a mabari companion is shown to be a highly sociable animal, and though not capable of speech, they can clearly respond to speech with growls, whines, barks and several other actions that demonstrate intelligent comprehension.

Of all the dog breeds that the Fereldans have produced, none are so highly regarded or so widely famed as the Mabari. Justly renowned, the Mabari are intelligent war hounds fully capable of understanding speech, perform complex commands, as deadly in a fight as any armed warrior, and loyal to one master until death do them part.

Ostagar's Kennel Master states that the mabari were bred by a mage to be smart and understand what they are told, and additionally to remember, understand, and carry out complex orders.[2] Fenris claims that mabari were originally created in the Tevinter Imperium and were specifically bred by magisters. When the Tevinter Imperium came to conquer Ferelden a long time ago, it is said that the mabari and their offspring eventually defected to the local barbarian tribes that the Imperium were fighting.[3] Fereldans also believe that the mabari were bred from the wolves who served the Alamarri hero Dane and anyone they are paired with are believed by Fereldans to be a person of worth.[4]

Mabari are huge mastiffs with a touch of wolf blood that stand as tall as a dwarf and just as wide. Their masters (or “partners” as many of those paired with Mabari prefer) will often choose a distinct style of war paint to mark them with so that they can better pick them out from other Mabari at a distance in the midst of combat. Correspondingly, many Fereldans that frequently fight alongside Mabari will scent themselves with distinctively pungent body paint called “kaddis” which allows the dogs to easily mark them as allies.[5]

The mabari are an essential part of Fereldan military strategy. Trained hounds can easily pull knights from horseback or break lines of pikemen, and the sight and sound of a wave of war dogs, howling and snarling, has been known to cause panic among even the most hardened infantry soldiers.[4]

The ability of normal dogs to detect a werewolf even when it is in a human guise is what first led Fereldans to adopt dogs as indispensable companions in every farmhold. Ironically, despite the dread Fereldans have of werewolves, the legendary hero Dane was reputed to live as a werewolf for a time according to the popular Fereldan folk tale "Dane and the Werewolf."[6] Since more than half the noble families of Ferelden claim to be descendants of Hafter, legendary Alamarri hero and son of Dane, who was reputed to be a werewolf; as a consequence, many Fereldans believe they have some distant kinship with wolves and therefore also have a kinship with mabari.[7]

Mabari hounds are descended from pack hunters, and like their ancestors, they are highly influenced by a defined order of dominance. The primary method of determining that order is by claiming territory through scent-marking major landmarks. Once established, the dominant mabari gains a substantial increase in confidence and stature within his territory, a trait that indirectly benefits master as well as hound.

The bulk of Mabari will bond with a single warrior, whom they will fight beside and follow until death takes them, for there are many stories of Mabari avenging a fallen master before lying down beside his corpse to join him. Due to their great value, “feral” Mabari are unheard of.[8]

The Warden may have a mabari dog join their party, either by virtue of being high-born, or by helping to care for a sick dog at Ostagar. After the battle, the dog will find the party on the road, slightly ahead of a horde of pursuing darkspawn.

Even if the dog is not accepted after Ostagar, if the Wardens decides to Return to Ostagar the Warden has another opportunity; the mabari will be revealed to have survived the darkspawn infestation and will be alive and willing to accompany the party.

Players who have The Black Emporium DLC will obtain a mabari war hound, named Dog in the default tradition of Dragon Age: Origins. This mabari can be summoned as a small fifth party member akin to a Ranger summoning animals.

Hostile mabaris can be found throughout the Storm Coast. The Blades of Hessarian also use Hessarian Hounds in combat, and other groups use similar Armored Mabari.

A lone mabari named Betyar can be found in the Canyon of the Hissing Wastes, guarding the shop of its owner.

Cullen Rutherford finds a mabari in Halamshiral during the Exalted Council, keeping it as a pet.

Codex entry: The Dogs of War 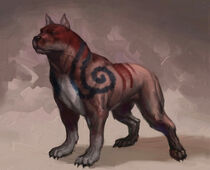 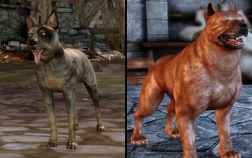 A simple dog compared to a mabari 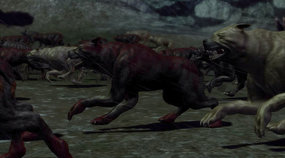 Mabari were used on the front line at the Battle of Ostagar. 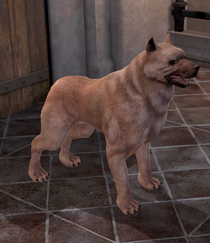 A Mabari in Dragon Age II 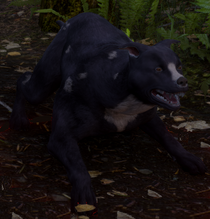 A Mabari in Dragon Age: Inquisition 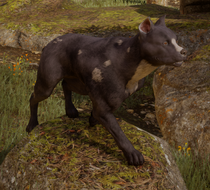 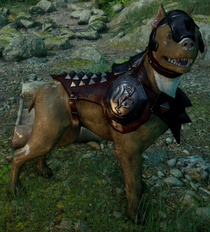 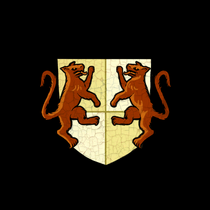 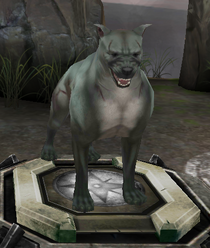 A mabari in Heroes of Dragon Age 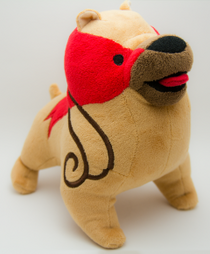 A plush toy of a mabari 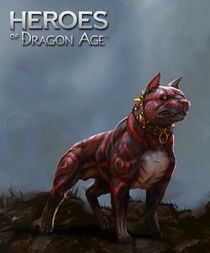 Artwork of Betyar with Kaddis in Heroes of Dragon Age