Edit
watch 02:23
Wiki Targeted (Games)
Do you like this video?
Play Sound
“It's not right. I studied hard, I passed my Harrowing, I sing the Chant. But I'll be locked up for the rest of my life.”

Lysas is an elven mage living in Redcliffe Village in 9:41 Dragon.

Lysas grew up in an alienage. When his magic came to him at the age of nine, templars brought him to the Circle of Magi without giving him the chance of saying goodbye. He attended the mages' conclave where Fiona led the vote to abandon the Chantry, but became extremely disillusioned with the rebel mages' alliance with the Tevinter Imperium and Magister Gereon Alexius. He supports mage freedom but not at the price of servitude to Tevinter.

Lysas is encountered upon first arriving at Redcliffe Village. After a brief dialog he relocates to the Gull and Lantern tavern. After the Inquisitor's meeting with Alexius in Redcliffe's tavern, Lysas provides additional insight into the magister's takeover of the rebel mages, as well as into the rebellion's beginning.

If the mages are recruited:
When the Inquisitor is drawn into the future by Alexius' amulet, Lysas appears as a prisoner infected by red lyrium, uncommunicative and hopelessly repeating the Chant of Light. 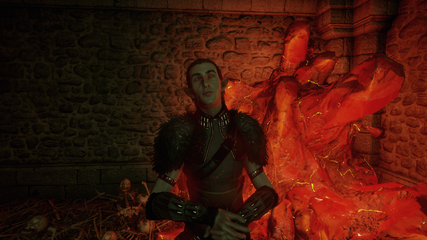 Lysas as a prisoner of Magister Alexius
Community content is available under CC-BY-SA unless otherwise noted.