Lyrium is a valuable but dangerous mineral that forms beneath the surface of Thedas.

According to Bianca Davri, the mineral is extremely volatile and sometimes explodes for no apparent reason. Physical contact with raw lyrium ore will cause serious injury and psychological damage for humans, elves, and Qunari, and any contact with the unrefined substance will kill a mage outright.

The Mining caste of the dwarves is the only group capable of safely mining and processing lyrium into a less dangerous and more useful form. How they achieve this is a tightly guarded secret.[1] In its natural state, lyrium is described as a metal. When properly refined, lyrium becomes a smooth, slightly iridescent, silvery liquid.[2]

Generations of proximity to lyrium ore veins have made dwarves naturally resistant, though not completely immune, to its effects. Even their resistance is only skin deep, as direct exposure of raw lyrium to open cuts, inhalation, or contact through the eyes or mouth leaves them vulnerable to side effects. The side effects are usually non-lethal so long as the amount of lyrium and frequency of invasive exposure is minimal. Surface dwarves lose this resistance over time.[3]

Lyrium exists both in the mortal world and in the Fade[4] and somehow bridges the gap between them.[5] It grows even in the Raw Fade unclaimed by spirits where it is always night.[6] Lyrium consumption strengthens a mage's relation to the Fade, thereby boosting mana.[7] The Chantry believes lyrium to be the emerald waters of the Fade, the very substance of creation itself, from whence the Maker fashioned the world.[5][8] Dagna's research indicates that lyrium and the Fade "are linked".[9]

"Isana" is the dwarven word for lyrium. They are taught that it is a gift from the Stone.[10]

Some scholars believe that lyrium is alive.[2]

This section contains spoilers for:
Dragon Age: Inquisition.
A similar conjecture is made by Bianca who states that red lyrium is tainted, and Blight doesn't infect minerals, only animals.[11] According to Valta, the lyrium is the blood of the titans, the very first children of the Stone.[10]

Raw lyrium emits a strangely soothing sound that some call the voice of the Maker.[5]

Dwarven miners are able to find lyrium veins by ear[8][12] as they claim that they hear the Stone sing.[13]

This section contains spoilers for:
Dragon Age: Origins - Awakening.
Justice says that his lyrium ring, a gift from the Warden-Commander, has a beautiful song that summons an ache he didn't know he had. He also states that lyrium doesn't sing in the Fade and regrets his inability to bring the music there for the other spirits to hear.
This section contains spoilers for:
Dragon Age: Asunder.
Rhys hears a faint song when Wynne pulls out a large bottle of lyrium. When they proceed with the ritual to enter the Fade, the song gets louder and more insistent until Rhys feels as if he is "about to vibrate out of existence". The strange music so different from the call of the Old Gods. It also "invades" and "fills up" Cole who witnesses the ritual, while Adrian is "swept away" by it when they awaken, leaving the Fade.
This section contains spoilers for:
Dragon Age: Inquisition.

Cole says that the song of red lyrium is different from the song of regular lyrium.[14] Whether it is also different from the call of the Old Gods is unclear. In his party banters Cole remarks that once "everything sang the same"[15] and then "the song was sundered"[16], even though "the old song still echoes" inside dwarves, almost like templars.[16].

The lyrium-infused staff found in Heidrun Thaig gives a faint hum: a wistful tune reminiscent of a faraway or forgotten place.[17]

The book that belonged to Paragon Garal mentions that dwarves once knew the song was the "Titan's hymn".[10] The titan communicates with Valta through its lonely song, revealing to her the forgotten dwarven history.[18]
This section contains spoilers for:
Trespasser.
If Leliana was killed in the temple by the Warden, she disappears, leaving a single note: "The lyrium sang thought into being. Now time is stale, and the melody is called elsewhere. Until I am needed, I am free."[19]

Dwarves from the mining caste traditionally mine raw lyrium and process it as they are the only ones who know how to safely mine the mineral.

This section contains spoilers for:
Trespasser.
In the time of Elvhenan Mythal has struck down the titans and ancient elves mined their bodies for lyrium.[20] The Inquisitor visits one such mining location in 9:44 Dragon Age (time period)

Processed lyrium is used by dwarves and the Tranquil to enchant items.

The dwarves of Orzammar give the greater portion of lyrium that they mine to their own smiths, who use it in the forging of all truly superior dwarven weapons and armor.[8] Dwarven smiths mix lyrium with steel to produce indestructible armor and blades that hold an edge for centuries.[2]

Trace amounts of lyrium can be infused in stones to create glowstones, which are used to light passages. This practice is most common in Orlais.[5][21]

The Anvil of the Void allowed Caridin to turn living dwarves into golems of steel and stone with the use of lyrium. The process involved dressing the volunteer in armor the size of the golem, then pouring molten lyrium through the eye holes, mouth hole, and joints of the armor. A magical, not mechanical, process animated the golems.[22][23][24]

The smiths of Amgarrak, with the aid of a Tevinter mage, created strange contraptions known as lyrium wells, capable of shifting objects and people through different levels of the Fade and creating runic golems. However, this was used against them when one of their experiments created a monstrosity capable of manipulating the Wells. After realizing what their creation was capable of, the smiths were forced to seal the thaig to make sure that it wouldn't be able to escape.

With the proper expertize, one can infuse lyrium within one's skin which looks like markings. The agonising process makes the victims more biddable, with the potential side effect of lost memories.[25] Touching the markings may be physically painful.[25] In Fenris' case these "lyrium tattoos" greatly enhance his combat skills, making him hard to track, giving him magic resistance, and generating bursts of damaging spirit energy. They even grant him the ability to phase through solid objects, an act that taps into the Fade.

Dwarven Shapers craft lyrium runes that contain the actual thoughts of the ones who made them. These runes comprise the Memories, the archives of Orzammar.[26]

When mixed into liquid and ingested, lyrium allows mages to enter the Fade when fully aware, unlike all others who reach it only when dreaming. This unique property is essential for the Circle of Magi's Harrowing ritual.

Such potions can also be used to aid in the casting of especially taxing spells, for a short time granting a mage far greater power than the mage normally wields.[8]

While mages use lyrium in their arcane spells and rituals, templars ingest the primordial mineral to enhance their abilities to resist and dispel magic.[27] It is also said that the substance gives them boldness and empowerment.[28]

Mages can also be branded with lyrium to become Tranquils, severing their connection to the Fade.[29]

Lyrium Sand is used to create Dworkin Glavonak's explosives: grenades that are said to match those used by the Qunari.

Dwarves use lyrium blast charges to open up passages, or seal them. Dwarves used them at one point to open up some of the old tunnels under Minrathous.[30] They are also used by the Legion of the Dead to collapse a tunnel during The Descent.

Even though dwarves have a natural resistance, raw lyrium is dangerous for all but the most experienced of the mining caste to handle. Even for dwarves, exposure to the unprocessed mineral can cause deafness or memory loss. For humans and elves, direct contact with lyrium ore produces nausea, blistering of the skin, and dementia. Mages cannot even approach unprocessed lyrium. Doing so is invariably fatal. Children born from those exposed to lyrium may be adversely affected.[31]

In its processed form, lyrium may be handled by anyone, but long term exposure or a single mistake while working with it can lead to serious side effects.[8]

Ingesting Lyrium is addictive. Since Templars are given lyrium to "develop their talents", this serves as incentive to keep them loyal to the Chantry, which controls the lyrium trade.

However Alistair seems to doubt whether it actually has any real effect and Cassandra is apparently capable of using talents similar to the Templars through the Seekers of Truth powers, although her powers originate from a different source.

Evangeline
Once that [one vial] is gone, I'll have perhaps a week before I start to feel the effects. Within a month, perhaps two, I'll go insane.
Rhys
You're addicted.
Evangeline
And there's nothing to be done about it. The Chantry controls the supply of lyrium, and thus they control the templars. There is no turning back from the order once you're within.
— Chapter 14, Asunder

Prolonged use by Templars becomes addictive, the cravings unbearable. Over time, they grow disoriented, incapable of distinguishing memory from present, or dream from waking. They frequently become paranoid as their worst memories and nightmares haunt their waking hours. Other known side effects than paranoia include obsession, and dementia.[27]

Cullen Rutherford states that templars also lose their memories due to prolonged imbibing of lyrium. It starts small at first − a misplaced item or words to a song − but more fades away over time.

“They don't do anything to keep you. You join the order, you're free to walk away. But they're the only one who've got the dust. Lyrium. [...] You need to drink the stuff to face down the magickers. Problem is, if you ever try to stop... (he sighs) it just about kills you.”―Samson[36]

Mages are the most affected by exposure to lyrium, as even close proximity to the substance is invariably fatal to them. Additionally, they have been known to suffer physical mutation from long-term use.[8]

According to Vivienne, anything that increases the capacity of a mage's magic (such as lyrium) creates a damaging effect on the body. For mages, this is known as mana imbalance. Some adverse effects of mana imbalance may include conscious dreaming in the Fade (such as those experienced during the Harrowing), periods of dizziness, and hearing voices. Unlike templars, mages are able to recuperate from the adverse effects.

Red lyrium is a rare, more potent and more addictive form of lyrium which contains taint.

Codex entry: At What Cost 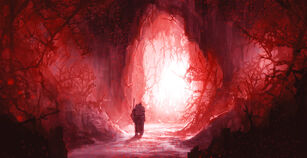 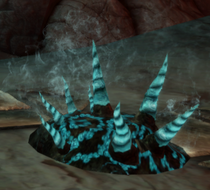 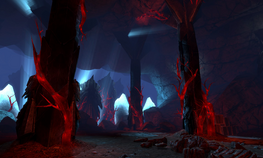 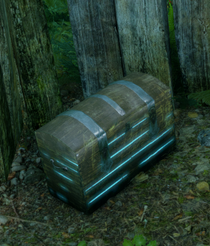