“We created a decaying world, and fought to preserve it even as it crumbled. We had to be stopped.”

The Threat Remains
Champions of the Just
Promise of Destruction

Lord Seeker Lucius Corin is the head of the Seekers of Truth, the enigmatic military wing of the Chantry which is responsible for supervising the Templar Order and dealing with more sensitive matters.

Lucius Corin was elected to the rank of Lord Seeker following the conspicuous disappearance of his predecessor, Lord Seeker Lambert van Reeves in 9:40 Dragon, just after the annulling of the Nevarran Accord removed the Seekers of Truth and the Templar Order from Chantry oversight. Lucius is known as a moderate and a man of reason, not prone to grandstanding. It was widely speculated that he would compromise in order to bring the Mage-Templar War to a swift end without further bloodshed.

Lucius readily agreed to Divine Justinia V's conclave to reach a peace settlement, although he refused to attend personally and some Templars speculate that he seems to regret having agreed to the conclave at all. In the wake of the Breach, Lucius orders the Templars to withdraw to Val Royeaux.

When the Inquisitor arrives in Val Royeaux to address the clerics, Revered Mother Hevara spots Lord Seeker Lucius and his templars approaching the stage and assumes they are returning to the Chantry to put an end to the recently reformed Inquisition. But this was not the case, and she is punched unceremoniously to the ground at Lucius' command. Lucius states his contempt at the revered mother's claim to authority and spurns her, the populace, and the Inquisition for not recognizing the Order's divine right to purge the mages nor appease their political grandstanding. Lucius reaffirms the Templars' independence and declares both the Chantry and Val Royeaux unworthy of the Order's protection; afterwards he leaves with his groups of Templars. Under the Lord Seeker's orders, the Templars garrison themselves at the abandoned Seeker fortress of Therinfal Redoubt.

If the Inquisition recruits the Templars:
When the Herald of Andraste arrives at Therinfal Redoubt, Ser Delrin Barris reveals that the Lord Seeker rearranged all of his plans to meet the Herald personally, rather than the Inquisition. The Lord Seeker however fails to arrive for the meeting with the Herald and Knight-Captain Denam appears in his stead. A battle breaks out between the Red Templars and the uncorrupted Templars. The Herald of Andraste and their companions set out to locate Lucius to discover the cause of the chaos. However when they finally locate Lucius, it is revealed the Lord Seeker Lucius Corin they met is in fact an Envy demon masquerading as the Lord Seeker.

When Cassandra looks into the disappearance of the Seekers, she and the Inquisitor discover that Lucius had sold his fellow Seekers to the Order of Fiery Promise after learning that they were resistant to red lyrium, thus making them unusable to Corypheus. The Lord Seeker in fact willingly allowed Corypheus' Envy demon to assume his identity and take command of the Templar Order while Lucius planned a trap to exterminate his fellow seekers. When confronted at Caer Oswin, Lucius reveals the 'truth' about what the Seekers of Truth really are; "abominations" who have created a never ending war by creating the Templar Order and the Circle of Magi. Lucius gives Cassandra a book that contains the secrets of the Seekers' order as proof of his words. Claiming to have higher ambitions than Corypheus, Lucius reveals his plans to creating a new purer Order that will start anew after the world ends with Corypheus' ascension to godhood. He attempts to convince Cassandra to join him only to meet his end in the ensuing battle.

Champions of the Just 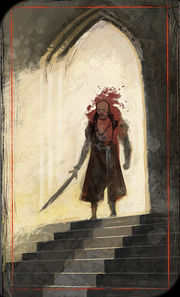 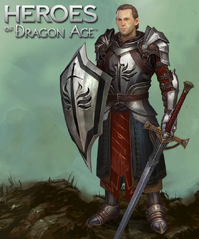