God of Secrets
Runes in the Lost Temple

The Lost Temple of Dirthamen is an ancient temple dedicated to the elven god Dirthamen. It is located in northeastern Orlais, off the northern coast of the Waking Sea.

The temple is dedicated to Dirthamen, the elven God of Secrets. A revered place of worship long ago, the temple now lay dormant and neglected. Although the temple remains standing, the elements through the ages have weathered away at the foundation allowing for the stone to crumble and the ruin to be flooded.

Hidden off the southern coast of the Waking Sea, the Lost Temple of Dirthamen protects an ancient elven artifact of impossible value. Crumbling and flooded after ages of neglect, it is a dark, dangerous place full of despair.

The temple had long been believed lost, until Cillian, an elven mage associated with the Inquisition researched a series of elven glyphs that the Inquisitor found on the Exalted plains. Research suggests that a group of treasure hunters had also located the temple several years prior, though they haven't been heard from since they left to investigate the temple.

A group of explorers were hired by a man named Lord Gretien to find an artifact called Dirthamen's Wisdom. Once there, however, the explorers became haunted by unknown malevolent spirits who drove the men to insanity, eventually turning their weapons upon each other.[1] The Inquisitor can gain access to the Temple of Dirthamen by completing the Runes in the Lost Temple war table scouting operation in Skyhold.

Path of Shadows
Path of Secrets
The Sanctuary

Runes in the Lost Temple

Freed Are Slaves (piece #11) - from the Chamber of Whispers (north westernmost chamber on the map), head east, then north; the mosaic piece is located at the end of the tunnel, behind the ice elemental barrier.

Freed Are Slaves (piece #12) - inside the Chamber of the Oracle on the right-hand side of the door; the piece can only accessed after defeating the Highest One.

Dirthamen's Wisdom - found inside the Chamber of the Oracle, after defeating the Highest One; see side quest God of Secrets.

Explorers in the Temple (collection of notes)

Explorers in the Temple (scribbled notes)

Explorers in the Temple (stained notes)

Explorers in the Temple (small chest)

Explorers in the Temple (human corpse)

Explorers in the Temple (note on a vase) 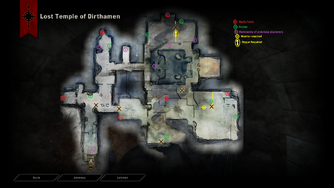 Map of the Lost Temple of Dirthamen, with locations of the body parts, runes, and explorer remnants.