Edit
watch 02:23
Wiki Targeted (Games)
Do you like this video?
Play Sound
“Well I'm here, I'm cold, and I'm certainly going to die. I hope you're as amused as Murdock is.”

Lloyd is the landlord of Redcliffe's tavern.

The Warden can first visit Lloyd's tavern during A Village Under Siege. He will trade equipment with the Warden and stocks some rare items including ale and a Double-Baked Mabari Crunch Recipe. Lloyd can be intimidated into fighting in the The Attack at Nightfall.

Note: Several of the options are only available once. If you do not choose them when they first come up, you will never get the chance to do so again.

Lloyd can participate in the upcoming fight in a variety of ways.

Note: In order for this option to be available, the Warden must first speak to the leftmost militia.
Note: The Warden must either kill or intimidate Lloyd into giving over ownership of the tavern before convincing him to serve free drinks, or that dialog choice will be gone forever.
Note: this option is only available the first time you ask him about it, via "I need some questions answered." or "Answer a few questions."

He will be in front of the chantry during the battle at Redcliffe Village if you manage to intimidate him. You have to manually use your healer to heal Lloyd, or focus your party towards protecting him. Lloyd charges into combat, and may leave the barricades to take on enemies beyond them. Left alone, he will die.

Once battle is over, talk to him and he will thank you for pushing him to fight as it gained him the respect of his fellow villagers. He will reward you with:

Note: The Warden must either kill or intimidate Lloyd into giving over ownership of the tavern before convincing him to serve free drinks or that dialog choice will be gone forever.

To get ownership of Lloyd's Tavern:

After gaining ownership of the tavern, the buy/sell options are replaced with take/stash. On xbox360

the inventory is glitched and you cannot stash items. (This may still work if you have the Warden's Keep DLC). Lloyd's trading merchant inventory (see below) will no longer be accessible, even after the battle.
The Warden can transfer ownership (if gained through intimidation) to Bella only after The Attack at Nightfall, and the non-trading free inventory will shift to her.

Intimidating him into joining the militia:

Intimidating him into joining the militia, but letting him give free ale to the militia instead:

Intimidating him to make you owner:

Persuading him to give free ale to the militia: 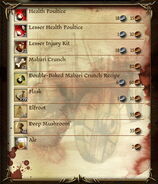 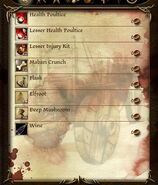