Edit
watch 02:19
Wiki Targeted (Games)
Do you like this video?
Play Sound
“We die in the eyes of our brothers so we can fight without fear. It offers redemption for the greatest sacrifice.”

• Stone's greetings, friend. You will fight ceaselessly in the Legion of the Dead.

The Legion of the Dead is an independent branch of the dwarven army that answers directly to the monarchy of Orzammar. It is considered to be the most intimidating and devastating force in the dwarven military and many attribute this to the fact that the Legionnaires consider themselves to be already dead.

The Legion is a military organization not unlike the Grey Wardens in that it accepts anyone from any level of society. Many join the Legion to avoid punishment for various crimes or to regain their honor. Others join to have their debts forgiven, thus restoring their Houses' lost honor. Some even join for the glory, and the Legion accepts them all the same.

Before they permanently leave Orzammar and enter the Deep Roads, the Legionnaires undergo a symbolic "funeral" where last goodbyes are spoken to friends and relatives and all ties to their former lives are cut. It begins with chanting and toasts, then the dwarves bid farewell to their friends and loved ones.[4] This funeral clears the dwarf's name and restores their family's lost honor. They are recorded as dead in the Memories, viewed as having found glorious and redemptive death in battling the dwarves' eternal nemesis, the darkspawn. The Legionnaire must then work to make this a fact through a courageous and honorable death.

The Legion of the Dead also bears the unique responsibility of purifying the Stone from a corruption called the gangue. The gangue is described as "the waste and the unstable rock that must be cut away from the Stone." It is the toxic influence contaminating the Stone, and whose harmful influence impedes all dwarves from achieving prosperity. The Legion of the Dead must carve out the worse of themselves as a prerequisite to face the gangue. Only the fully adorned of the Legion are worthy enough to face and destroy the gangue.[5]

Legionnaires are typically marked with grim tattoos and equipped with heavy armor. When a Legionnaire dies in battle the Legion entombs them, thus returning them to the Stone.[6][7] The Legion celebrates the fact that the fallen has finally found peace. Units of the Legion of the Dead are sometimes supported by Grey Wardens in the ranks, who as part of their Calling, go to Orzammar to honor an ancient pact with the dwarves by fighting till the end against their common foe.[8]

Non-dwarves may also join the Legion, but this is very rare. The only known human to join the Legion was a man named Sir Aurelian Pentaghast who was disgraced when he attempted to assume the throne of Nevarra in 8:60 Blessed.[1][9]

The headquarters of the Legion of the Dead used to be located in Bownammar, also known as the City of the Dead, an impressive fortress which was designed by the Paragon Caridin. In 9:13 Dragon, it was abandoned to the darkspawn with great regret.[10] As the Legion's activities spread in a large portion of the Deep Roads and not only around Orzammar, they regularly create sturdy crates which contain clothing, food and weapons in various locations in case they are needed.[11]

Rest well, my friends. For one hundred and twelve nights you lasted. Now it is time for you to return to the Stone, in the sight of the First Paragon.

—a funeral rite by Nalthur[3]

When a Legionnaire dies, there is a second funeral to return them to the Stone. If it is possible to do so, the remaining Legionnaires bury their fallen brethren. The bodies of the dead are placed in sarcophagi which are sealed within graves in order to protect them from being defiled by darkspawn.[3][12]

The nature of the Legion, however, means that as their numbers dwindle the very last of them will not be buried and given their return to the Stone.[3]

In 8:99 Blessed, Prince Maric Theirin and his party was rescued by Nalthur and his regiment from a darkspawn attack. After the battle the Prince managed to convince the dwarf in helping him to reclaim the throne of Ferelden as part of the Fereldan Rebellion. He was able to have their aid by assuring them that he would tell the dwarves in Orzammar about their deeds, and bury them in the Stone, not in the surface. The dwarves apparently hold great respect for the word of the human kings, as this alone was enough to motivate even the most tentative of the Legion to leave the familiar environment of the Deep Roads for the surface. In the ensuing fight in Gwaren, the dwarven regiment destroyed half of the chevalier force. Some months afterwards, the Legionnaires participated in the major Battle of River Dane which was a crushing defeat for the Orlesian occupiers. However, Nalthur, as well as the rest of his regiment, were killed in the fight.

When the Warden and their party reach the Dead Trenches, they meet a group of Legionnaires led by Kardol, who appears to be a high-ranking officer of the Legion. He can later be persuaded with Master Coercion to bring the Legion to the surface to help with the Fifth Blight. Alternatively, if the Warden is of dwarven Origin, Kardol happily offers to back the Warden. When initially asked about his plans for the Blight, Kardol states the Legion will cut off the darkspawn's retreat once the Archdemon is defeated, although if they are brought to the surface, he will personally fight alongside the Warden in battle against the Archdemon. Provided they come to the surface, the Legion supplies troops known as Legion of the Dead Avengers to join the battle alongside regular dwarven troops, equipped with the distinctive armor set of the Legion and battleaxes.

During the Dead Caste quest, the Warden can deliver an insignia to the Shaperate which will possibly elevate the Legion to minor nobility because one of their former members was the last member of noble House Ferald. Furthermore, a fully adorned Legionnaire who interacts with a shrine faces the Gangue shade which is believed to be the gangue — the waste and unstable rock — which must be cut away from the raw Stone that encircles and protects the dwarves.[5]

If a dwarven Warden survives the events of the Fifth Blight and requests military aid for Orzammar as their boon and Bhelen Aeducan is the new king, the combined Fereldan-Orzammar offensive successfully drives the darkspawn all the way back to Bownammar.[13]

The Warden-Commander of Ferelden meets a Legionnaire scout named Sigrun whose unit was wiped out in an unsuccessful attempt to retake Kal'Hirol from the darkspawn. Inside Kal'Hirol, they find an injured Legionnaire named Jukka who warns them of the Children before succumbing to his wounds.

It is revealed that for ten years, Paragon Garen sent many Legionnaire units to Corypheus' Prison in search of his exiled son who was falsely accused of murdering his sister. The Legionnaires were trapped in the prison and eventually died. Some of their bodies are found by Hawke at the tower base as part of Legacy DLC.

As a result of the alliance between Orzammar and the newly re-established Inquisition, the legionnaire Korbin is assigned to aid the Inquisition in their conflict on the surface.

A sudden series of earthquakes in the aftermath of The Breach interfere with a Legion of the Dead investigation on behalf of the Shaperate and seriously imperil Orzammar's most efficient lyrium mines. The Legion reach out to their traditional allies, the Grey Wardens for aid in investigating the matter but are unable to contact them. The Legion then turns to their second choice, the re-established Inquisition to aid in an expedition to find the source of the quakes and neutralize them as part of The Descent DLC.

Joined by the Inquisitor personally, Lieutenant Renn and Shaper Valta range far deep into the Deep Roads, eventually breaking a darkspawn nest and establishing a Legion camp in the ruins of Heidrun Thaig.

Codex entry: Legion of the Dead

Helm of the Deep

Legion of the Dead Armor Schematic

Legion of the Dead armor set

Legion of the Dead Maul

Heraldry: Legion of the Dead 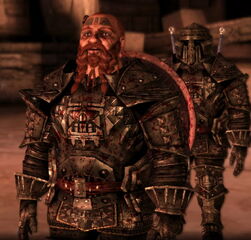 Two members of the Legion of the Dead 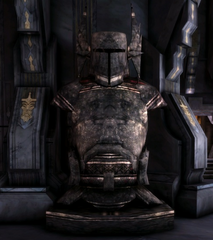 Statue of a Legionnaire in Bownammar 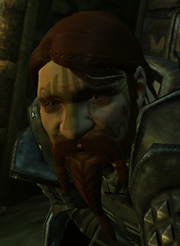 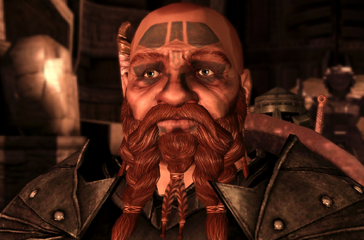 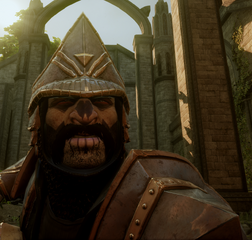 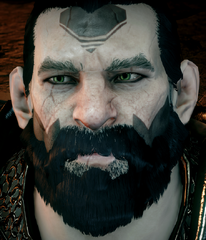 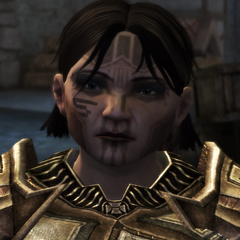