For the quest, see Legacy (quest).

Legacy is story-driven downloadable content for Dragon Age II. It can be played at any time after reaching Kirkwall and takes place before the events of the end game. Although Legacy can be played after the campaign and the equipment acquired will improve based on the player's level, it is also a good opportunity for Hawke to gain experience, gold and equipment early in the main story. Hawke and the party will travel to the Vimmark Mountains.

The DLC was released on July 26, 2011 following its preview at the San Diego Comic Con.[1]

Targeted by a vicious criminal cartel that is hunting "the blood of the Hawke," you must put an end to its relentless attacks. Leave Kirkwall and journey to an ancient Grey Warden prison in order to find the source of the aggression and uncover the harsh truth about the Hawke lineage. Playable from any point in the DAII campaign, face all new darkspawn, forge a powerful new weapon and come face to face with an ancient horror.[2]

A Memento of the Past[]

Main article: A Memento of the Past

Hawke can interact with the griffon statue in their home in any Act after arriving in Kirkwall. This will trigger a cutscene of Cassandra interrogating Varric, before cutting to the party in the Vimmark Wasteland.

Hawke will have to fight their way through a Carta base swarming with obsessed dwarves who are bound to the will of one they call "Corypheus". After defeating the Carta leader, Rhatigan, the party will proceed into a prison in the bowels of the earth.

The majority of the DLC takes place within an ancient Warden prison tower. The party must battle their way to the top of the tower and face the creature imprisoned there. Along the way, they do battle with darkspawn and dwarves, meet the ghoulish and the mysterious Larius, and encounter the powerful mage Warden, Janeka. Hawke will be forced to choose between supporting Larius or helping Janeka. Either character will lead Hawke to the top of the tower and the monster which waits within.

Hawke will encounter an ancient Tevinter magister, Corypheus, who is responsible for the attacks on the Hawke family. Before Hawke does battle with the ancient evil, a chilling secret is revealed.

A Memento of the Past (main)

Riannon's Floor (if Hawke sided with Larius in Tower Base)

Daneken's Floor (if Hawke sided with Janeka in Tower Base)

Turquoise Ring of the Archon (Varric) 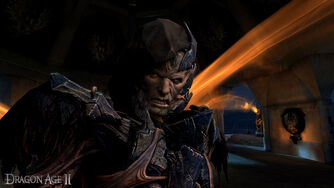 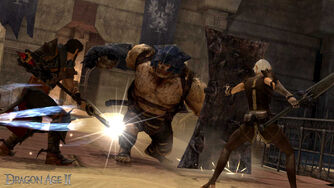 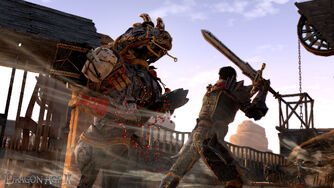 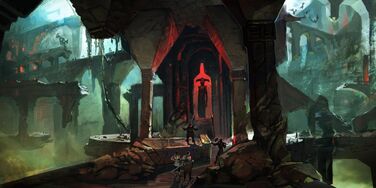