“We've lost it all. Everything your father and I built.”

The Destruction of Lothering
Birthright
All That Remains

Leandra Amell[1] is the widow of apostate mage Malcolm Hawke, and the mother of Hawke, Bethany, and Carver. Her birth family, the Amells, are nobility in Kirkwall.

Leandra was born in Kirkwall in the later years of the Blessed Age, the first child of the powerful Lord Aristide Amell and his wife Lady Bethann Walker. Her brother Gamlen was born a year later. Their parents favored Leandra and doted on her, showering her with gifts and attention. While Gamlen grew to resent their parents' favoritism, the siblings adored each other.

At age eleven, Leandra was betrothed to Guillaume de Launcet, the eldest son of Comte Reynaud de Launcet. They met the next summer at the comte's country estate.

In 9:05 Dragon, Leandra and her family attended a banquet at Viscount Perrin Threnhold's estate in honor of the visiting Grand Duchess Florianne de Chalons. There, she met Malcolm Hawke, a member of Kirkwall's Circle of Magi. Gamlen helped them sneak out to the balcony to talk in private when he noticed the way his sister looked at Malcolm.[2] They left the estate deeply in love with one another.

Malcolm and Leandra continued to meet in secret over the next few months, with Gamlen's continued assistance. When Leandra realized she was pregnant, they decided to run away and wed in secret. By the time Malcolm managed to escape the Gallows and find a ship willing to offer them passage to Ferelden, Leandra's parents had discovered her pregnancy. Furious that his daughter had chosen a mage, Lord Aristide sent Templars in pursuit of Malcolm. While hiding-out in Lowtown, Malcolm was approached by Warden-Commander Larius with an offer to assist the Grey Wardens in exchange for reuniting him with Leandra. Malcolm agreed to his conditions and prior to setting off for the Vimmark Mountains he sent Leandra a message telling her that they could finally be free once he returned.

The Wardens needed a non-tainted mage to perform a blood magic ritual to keep Corypheus contained. They threatened Leandra's life to get Malcolm to comply.[3]

When Malcolm returned to Kirkwall with a Grey Warden escort, Lord Aristide told his daughter to choose between her family or Malcolm, saying that everything would be forgiven if she chose to renounce her apostate lover. Leandra chose Malcolm; Lord Aristide disowned her. Her mother refused to see Leandra before she left.

Malcolm and Leandra left for Ferelden that night. They settled in a small village near Amaranthine for a time, where Malcolm worked as a farmhand and Leandra as a seamstress. Their first child, Hawke, was born a few months later. They were forced to move often to avoid being captured by templars. Leandra's mother died of cholera around 9:10; Lord Aristide followed her a year later. As Leandra had recently given birth to twins, Bethany (named after Lady Bethann) and Carver, she was unable to attend the funeral.

Unbeknownst to her, her parents had come to forgive her. Lord Aristide left everything to Leandra, leaving Gamlen only a small stipend to be administered by her.[4]

Leandra has one of several facial structures and hair styles, depending on the customization of the player's character. The selection works as follows:

Shortly after the Battle of Ostagar, where at least one of her children had fought as a soldier in service to King Cailan, Leandra escapes Lothering's destruction with her family, the darkspawn vanguard in close pursuit. During their flight through the Blightlands, one of the twins is slain by an ogre. Stricken with grief, she blames Hawke for this, as she believes that they could have prevented her child from "charging off." Leandra and her remaining children, along with Aveline Vallen, escape to Gwaren with the aid of Flemeth, the Witch of the Wilds. There, they take a ship to Kirkwall, where Leandra's family, the Amells have an estate. However, Leandra's younger brother Gamlen lost the estate some years earlier due to his gambling habit. To help his family gain entrance into the city, Gamlen commits Leandra's children to working for either mercenaries or smugglers for a year, much to her dismay.

Leandra and Gamlen experience some conflict over money, as well as the loss of the Amell estate. Hawke and their sibling can go to the vault of the old estate to find their grandfather's will, which shows that their grandfather left the estate to Leandra and her children while Gamlen was to receive a stipend, controlled by her.

Leandra still expresses sadness at the loss of her child in Lothering, but does not seem to blame Hawke for the death anymore; indeed, if Hawke asks her about it directly, she apologizes for having lashed out in her grief.

Before Hawke sets out for the Deep Roads expedition, Leandra pleads for her other child to stay behind: she fears losing both children, should the expedition fail.

Upon Hawke's profitable return from the Deep Roads, the family regains control of the old Amell estate from the slavers and Leandra tells Hawke how proud she is. She talks about finding a suitable partner for Hawke and even entertains the idea of remarrying. If Hawke is in a romance, she briefly acknowledges it. Bodahn Feddic and his son Sandal become part of Hawke's household at this point; Bodahn refers to Leandra as "Mistress Amell" and appears to be quite fond of her.

When Hawke investigates the mystery over the missing women in Kirkwall, Leandra is abducted by the white-lily serial killer while on her way to visit Gamlen. Following the killer's trail, Hawke finds that Leandra has been murdered and pieced together with parts of other women by the killer, kept alive by his magic as he believes Leandra's face resembles that of his deceased wife. During his battle with Hawke, the killer causes Leandra to appear in the possessed form of a desire demon along with his other victims, Ninette de Carrac and Alessa. Before Leandra dies, she tells Hawke how proud she is.

If Leandra is deceased during the events of Legacy, her ghost appears to Hawke at the end of the DLC. She converses with her child about her husband, Malcolm. Varric, in his role as narrator, admits that this conversation did not actually take place, but says that he feels Hawke deserves the closure and so he has added it to their story. The conversation will still happen if Legacy is completed before her death, but will have a slightly different tone (and of course will need no explanation from Varric). 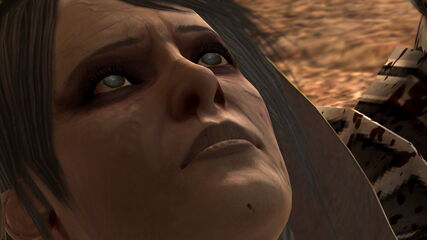