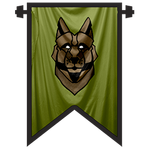 Lateral Thinker is an achievement added by the Trespasser DLC for Dragon Age: Inquisition. The achievement can be obtained by solving four unique puzzles that unlock reward caches that are being watched over by ancient elven statues.

“The Dread Wolf keeps its gaze on the one light that illuminates the way forward.”

“Where the Dread Wolf's gaze blazes, paths are brought to light.”

“When the Dread Wolf's gaze is bright, light burns in a ring of the dead.”

“One sees the hunter, one flees from it, one hunts it in turn, one outwits them all.”

The Elven Mountain Ruins Puzzle Statue
Add a photo to this gallery
Retrieved from "https://dragonage.fandom.com/wiki/Lateral_Thinker?oldid=873068"
Community content is available under CC-BY-SA unless otherwise noted.