Last Resort of Good Men is a companion quest for Dorian in Dragon Age: Inquisition.

Mother Giselle passed along the letter written by Dorian's father. Dorian may wish to read it, but it may be best just to take him to the tavern to sort this out in person.

The Inquisitor must have spoken with Dorian about a letter regarding Felix, which requires warm approval (35+) with him. Speaking with Mother Giselle at her usual location in Skyhold's garden will cause her to go to the main hall. There, she asks for a moment of the Inquisitor's time, and eventually hands over a letter from Dorian's family.

Upon speaking to Mother Giselle, she informs the Inquisitor that she has received a letter from Magister Halward Pavus, Dorian's father. He asks that she brings Dorian to a secret meeting, and that a "retainer" will be watching for them. (The letter is shown in the Gallery.)

The Inquisitor has the option of telling Dorian about the letter. If done so, a bit of extra dialog and a brief scene will play, without approval changes. However, at a later stage of the quest, a chance to gain approval is not given, if this option was chosen.

Whether he is aware of the meeting or not, entering the Gull and Lantern in Redcliffe Village, Hinterlands with Dorian will present a deserted tavern, and no "retainer" in sight. Instead Halward himself appears at the base of the stairs, and a discussion between father and son starts.

On several points the Inquisitor has a comment, even offering to leave, or might ask questions, until there's finally a dialog wheel with four choices that have an effect on the outcome of the quest and may change Dorian's approval. The first "set" is required for great approval and a debate of father and son, the second "set" will leave them estranged and may result in no great approval at the end, depending on future dialog choices.

The Inquisitor returns to Skyhold, leaving father and son in private. (Prerequisite for

Halward appears distraught and does not intervene when the Inquisitor and Dorian together leave the tavern to return to Skyhold. (Prerequisite for no

Great Approval later.) (This could possibly cause the "what must you think of me now" dialog (listed below) to be skipped and bug the romance.[confirmation needed] )

The quest completes. In Skyhold, Dorian reflects on the events at the window of his alcove …

His line varies, depending on how the last scene ended, but the initial choices are always the same

No approval changes from other choices

If Dorian wasn't told about the letter:
… Why didn't you let me decide?

The last dialogue choice is always the same
Maker knows what you must think of me now, after that whole display.

Towards the end of the scene, Dorian 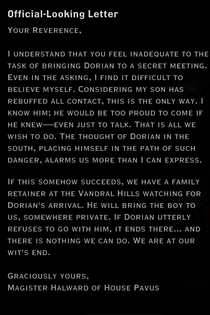 Retrieved from "https://dragonage.fandom.com/wiki/Last_Resort_of_Good_Men?oldid=885302"
Community content is available under CC-BY-SA unless otherwise noted.