Warden-Commander of the Free Marches (formerly)

Larius is a former Warden-Commander of the Free Marches, now tainted and residing in the Grey Wardens prison tower in the Vimmark Mountains.

Larius became Warden-Commander of the Free Marches at a younger age than most through perseverance and dedication to the duty of the Wardens.[1] He left the order to go to his Calling after almost thirty years as a Grey Warden. He claims to have died once, but is still alive. The influence of the imprisoned entity drove him insane. Despite his mental health, as well as him being on the verge of becoming a ghoul, he is able to tell Hawke much of the history of the prison tower and their father, Malcolm.

Larius was the Warden-Commander responsible for re-sealing the prison built by the Wardens to contain Corypheus. Fearing the ability of Corypheus to influence any entity with the Darkspawn Taint including Grey Wardens, the Wardens sought a non-Warden Mage to re-enforce the seals. Larius chose Malcolm Hawke for the task. Malcolm Hawke was initially reluctant and a desperate Larius delivered an ultimatum; aid the Wardens or never see Leandra Amell again. Malcolm agreed in exchange for the Wardens arranging to protect Leandra in his absence and that her father be "convinced" to allow Leandra to leave Kirkwall with Malcolm and not pursue her. With their mission complete, Larius returned to his duties and served as a Grey Warden until the time came for his calling.

Hawke encounters the still living Larius wandering around Corypheus' prison. Through his partially coherent ramblings, Larius will reveal the nature of Corypheus, the prison and the nature of the seals.

Eventually Hawke must choose between Larius and Janeka regarding what to do with Corypheus. Larius argues for killing him as the seals keeping him imprisoned are deteriorating, whereas Janeka wishes to free him, confident that she can use blood magic to control him and use him as a weapon to end the Blights.

If Janeka is once again sided with at the Final Seal, Larius will attempt to stop her, but she uses her magic to tear him apart. If Hawke decides to side with Larius after previously supporting Janeka, she will try to kill Hawke, but Larius will tackle her and beat her to death with his bare hands. Larius will then dispatch the remaining Grey Wardens to warn the rest of the order of what has transpired. If Hawke had previously sided with Larius, Janeka will attempt to sway Hawke to her side by revealing Larius had coerced their father, Malcolm, into restoring the seals on Corypheus' prison by threatening to murder their mother, Leandra.

If Hawke supports Larius on both occasions, a fight will ensue in which Hawke will be forced to kill Janeka and the other Grey Wardens.

Larius will then tell Hawke that they must break the seals with their blood, and kill Corypheus before he awakens. A battle ensues in which Hawke kills the ancient evil.

If he survived when Hawke speaks to Larius after the battle with Corypheus, the former Warden-Commander explains that he has more clarity now that the darkspawn is dead and he can no longer hear him. He repeatedly thanks Hawke for his freedom. As he is walking away from the Champion, he smiles sinisterly.

Hawke mentions in their journal that they sighted a person — that appeared to be Larius — having a discussion with the ex-templar vagrant Raleigh Samson. When Hawke attempted to approach them, the two avoided Hawke by disappearing into one of Lowtown's intricate shantytowns.

This section contains spoilers for:
Dragon Age: Inquisition.
If Larius survived the events at Corypheus' Prison:
Bianca Davri, following her discovery that Red Lyrium is simply lyrium corrupted by the Taint, attempted to make contact with a Grey Warden Mage to help her with her research. She made contact with Larius and gave him the key to her facility. Varric, knowing that Larius is not supposed to be a mage, deduces that Corypheus possessed him after Hawke 'killed' him. 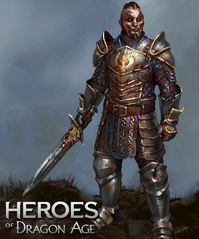