Landmarks on the Plains

Landmarks on the Plains is landmark collection in Dragon Age: Inquisition.

Discover all landmarks in the Exalted Plains.

Triggered when any Plains landmark is found.

There are 18 landmark locations on the Plains.

Nine landmark locations are scattered about the Plains:

Four white Memorials of the Second Exalted March landmarks can be acquired:

Var Bellanaris. "Our Eternity." Where hundreds of our ancestors are buried, where those of us who can, still lay our kin to rest. Although this land now belongs to Orlais, the shemlen have never reclaimed it. Perhaps their guilty conscience stops them. Or perhaps those uncomplimentary tales of elven curses and vengeful spirits have some use after all.

The plaque on the statue reads:
"Let the Light of Andraste lift your spirits"

The plaque on the statue reads:
"Let the Eternal Flame purify your soul."

The half-buried wall of arches made for a unique camping spot. My guide informed me that it was once part of an ancient elven arena, although nothing in the histories I read mentioned anything of the sort on the plains.
He also insisted on clambering up to the top of the blasted ruins, after swearing he had seen a royal elfroot plant growing out of a crevice.

Long age, when our people were strong and free, we roamed the world and could do as we pleased. But we were taight by Andruil, Mother of Hares, to respect nature and all the Creaters' creatures. Even though the earth was ours, we did not misuse it. They say the great leaders of the People would pray to Andruil for guidance. Where shall we hunt? Where shall we raise our halla? Where shall we settle and build? Andruil would sen dher messenger, the owl, to show the People the way, and they would follow him to where the land was blessed.

Always keep an eye out for the noble owl. You never know; Andruil might have a message for you.

Did you know that "revas" is the elven word for freedom? "Revasan" is the place where freedom dwells. One wonders why it wasn't given a more appropriate name after the reclamation of the Dales. Perhaps the adage remains true: once one gets used to a name, it's hard to change.
The walls in this place are ancient. I hope it holds.

—From the log of Marshal Bastian Proulx, loyal to Grand Duke Gaspard

Ville Montevelan was the first settlement humans established in the Dales following the victory of the Exalted March. Soldiers were the earliest residents of the village. In 2:21 Glory, Sister Amity, Champion of the Exalted March, laid the foundation stones of the village chantry in a symbolic gesture; the building's construction was completed in 2:22. Laying aside her sword and bow, Sister Amity took on the task of leading Ville Montevelan's flock, becoming Revered Mother Amity. She served the Maker for over forty years, ministering to both residents of the Dales and the many pilgrims to the historic site. Revered Mother Amity died peacefully in her sleep in 2:64; her ashes are interred in the chantry's vault, where dozens of pilgrims still come each year to pay their respects.

—From Exalted: A History of the Dales by Lord Ademar Garde-Haut, royal historian.[2]

A plaque on the bridge of Pont Agur reads: "Dedicated to all, elven and human, who lost their lives in the second Exalted March"

Pont Agur was built a hundred years after the Exalted March of the Dales. It was named for Mayor Agur of Ville Montevelan, who raised the money to have the bridge built after several villagers drowned in a ferry accident trying to cross the river, swollen after the rains. Some villagers took offense at the dedication message on the bridge, which honors fallen elves as well as humans. Rumors that the mayor was elf-blooded began circulating; he was forced to step down.

This ancient structure has stood since the time of the elven kingdom of the Dales. Since then, it has fallen into ruin; no one alive knows for what the elves used it. Grand Duke Gaspard's forces claimed it as an outpost early in the Orlesian civil war.

The Path of Flame[edit | edit source]

Remember where Andraste's Champions first set foot in the Exalted Plains, called Dirthavaren by the elves. Halamshiral's dark heart was conquered, but one last challenge came from the elves, who would not submit to the Maker. They gathered upon the plain; our Champions answered their call. Marching in Andraste's Light, on the Path of Flame: Lord Demetrius Aron, Sister Amity, and Ser Brandis of Lac Celestine, called the Silver Helm.[3]

Remember Lord Demetrius Aron, the only of Andraste's Champions to fall. The forces of the Exalted March met the elves upon the field; our numbers far exceeded theirs. The Champions, kind and fair, gave the elves a chance for peace, but the elves would not lay down their arms. They slew Lord Demetrius in their charge. Maker take him to His Side.[4]

Remember the victory of the Dales. The Elves were murderous and wild, for the Maker's grace did not touch them. The wildest of them was the she-elf Lindiranae, wielder of the great blade Evanura. Defiant to the last, she met Ser Brandis, the Sliver Helm, in single combat, and he bested her. With Lindiranae fell the Dales.[5]

Triumph of the Light[edit | edit source]

Remember the Triumph over the profane. Sister Amity led the March to the river Tenasir, where stood shrines to the elven gods. These she struck down; standing upon the banks, she sang the Chant of Light. Andraste's Word had come to the Dales, and delivered them from wickedness.[6]

The great stone hand was something of a mystery. One assumes it is a piece broken off from a larger whole. If so, judging by the size of that one hand, I imagine the entire sculpture to be... well, large enough to require the use of obscenities to describe it. Thus I have only one question: where is the rest of the statue? It is difficult to imagine how something so large could go missing.

I intended to take a charcoal rubbing of the beautiful elven carvings on the stone, to present to a scholar at the University of Orlais for translation. Unfortunately, halfway through the process, the chilling sensation of something brushing my leg beneath the dark water interrupted me. I dropped both scroll and charcoal stick, and began running, not stopping until I was on dry ground.

The Dalish believe that Fen'Harel, the Dread Wolf, locked the gods of good and evil away; only he walks free. Although they see him as a betrayer, elves still erect shrines to Fen'Harel. One imagines they do not revere him so much as seek to appease him, lest they draw his gaze.

—From In Pursuit of Knowledge: The Travels of a Chantry Scholar by Brother Genitivi

This mysterious hooded figure in Citadelle du Corbeau was nicknamed "the Raven" after the second Exalted March. The human forces - unfamiliar with elven iconography - saw the shadow the statue cast upon the courtyard, and imagined dark wings spread over the keep. Some years later, scholars of elven history hypothesized that the elves may have intended the sculpture as a representation of Dirthamen, the elven god of Secrets.

The large fortress known as Citadelle du Corbeau was claimed after the second Exalted March. Originally an elven keep, the Orlesians who seized it never discovered its true name, although they did find the magical wards the elves set in place. Mages of the Orlesian Circle spent years studying these defenses, but the occupiers never fully understood them. 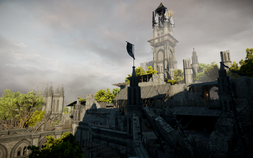 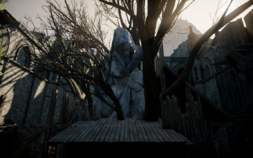 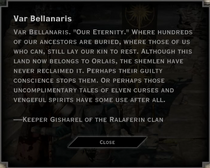 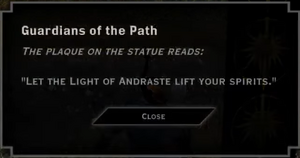 Guardians of the Path Light of Andraste Landmark Text 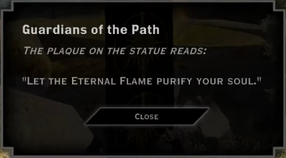 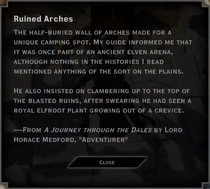 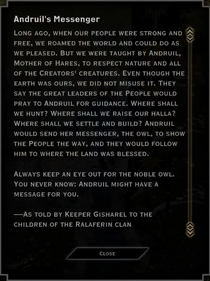 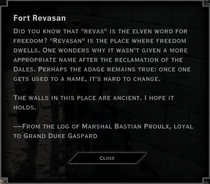 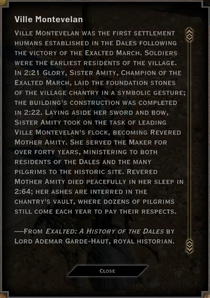 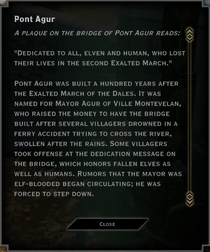 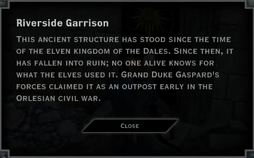 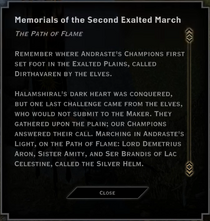 The Path of Flame Landmark Text 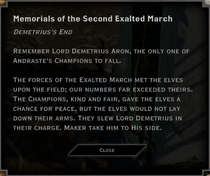 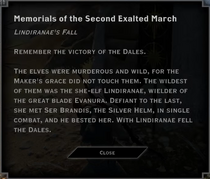 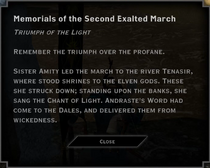 Triumph of the Light Landmark Text 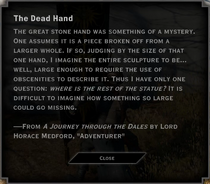 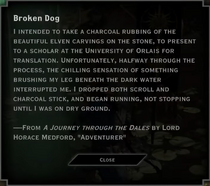 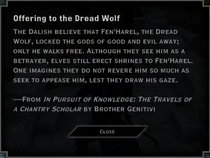 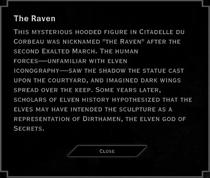 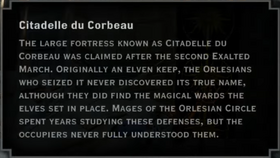 Retrieved from "https://dragonage.fandom.com/wiki/Landmarks_on_the_Plains?oldid=881303"
Community content is available under CC-BY-SA unless otherwise noted.