Landmarks on the Coast is landmark collection in Dragon Age: Inquisition.

Discover all landmarks in the Storm Coast.

Triggered when any Coast landmark is found.

There are five landmark locations on the Coast:

The large statue situated at Morrin's Outlook once served as a marker for ships coming to trade with the dwarves. Beyond an assumed connection with the great port at Daerwin's Mouth, nothing is known of the statue's namesake.

—From The Storm Coast and its History by Brother Genitivi, Chantry scholar

It is not uncommon to enter a cave nestled in the basalt columns of the Storm Coast and discover traces of ancient dwarven architecture. Prior to the First Age, the dwarven people maintained a sizeable presence on the coast. Mining guilds were drawn to the area's then-plentiful mineral deposits.

All dwarven activity ceased when darkspawn incursions forced the Deep Roads to be sealed, severing the region from Orzammar.

—From The Storm Coast and its History by Brother Genitivi, Chantry scholar

So Galen made his way though the wood until he saw the light of the quarter moon shining on the rock. Elise emerged from the pines, and they shared a quick embrace before making their way to the waiting ship.

—From a local version of The Resourceful Lovers[1]

It's said that lovers who kiss the stone tree will be blessed with a long and happy marriage. Those fond of the superstition tend to ignore renditions of the tale in which Galen and Elise drown at sea.

—Sister Holda, from her unpublished work Folk Nonsense and Other Absurdities[2]

Through the mist, the water shone a brighter blue than the sea outside. I knew they would come soon.

—From the journal of Molly Hesslan, dated 9:3 Dragon. Sealed in Kinloch Hold, the Circle Tower at Lake Calenhad, when Hesslan was made Tranquil in 9:5 Dragon

Built into the cliffs of the Storm Coast, the port at Daerwin's Mouth once connected the dwarven thaigs to the Waking Sea. In addition to increasing trade between the dwarves and their allies in the Tevinter Imperium, direct access to the Deep Roads meant diplomats from Orzammar could visit the port without fear of losing their "stone sense." The site thus became a popular meeting place for ambassadors of the two nations.

When darkspawn incursions forced the dwarves to retreat into Orzammar, the Deep Roads leading to Daerwin's Mouth were sealed and the port fell into disuse. At least, all reputable use of the port ceased—bandits, smugglers, and pirates are known to use the various caves along the Storm Coast, including Daerwin's Mouth itself, for their own gains.

—From The Storm Coast and Its History by Brother Vincent, Chantry scholar[3] 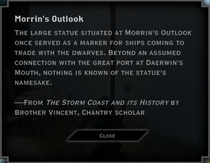 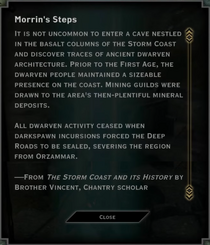 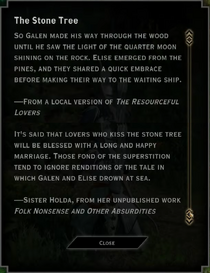 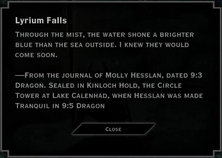 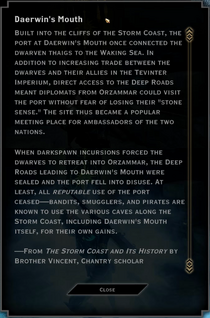 Daerwin's Mouth Landmark
Add a photo to this gallery

Retrieved from "https://dragonage.fandom.com/wiki/Landmarks_on_the_Coast?oldid=881305"
Community content is available under CC-BY-SA unless otherwise noted.