Landmarks in the Hinterlands is landmark collection in Dragon Age: Inquisition.

Discover all landmarks in the Hinterlands.

Triggered when any Hinterlands landmark is claimed.

There are 17 landmark locations in the Hinterlands.

Nine landmark locations are scattered about the Hinterlands:

Eight additional landmarks can be acquired from the following Saga of Tyrdda Bright-Axe, the Avvar-Mother:

This bridge was broken recently, most likely in fighting between apostate mages and renegade templars.

Arl Tiranon Guerrin's eldest son came late in the arl's life, and there was much hope for the young man to follow in the footsteps of his successful father. Unfortunately, Lornan Guerrin proved to be profoundly lazy in his youth, more interested in spending his father's money than tending to his lands.

In frustration, the arl ordered a fort constructed in the mountains. He sent Lornan there, stating that his son could return to Redcliffe only when the bandits that lurked in the mountains had been brought to heel.

Accepted history says that Lornan reformed, routed the bandits, and returned to Redcliffe a changed man. Whispers in the family, however, suggest that the man who returned to Redcliffe was in fact a soldier who bore some resemblance to Lornan, and who fought well against the bandits in the mountains, while Lornan rested comfortable in his mountain keep for the remainder of his days.

These ruins mark the spot where a windmill once overlooked Redcliffe village. It was destroyed in the last days of the Blight when darkspawn attacked the area, and was never repaired.

Dwarf Commoner Origin...
The Hero of Ferelden was born casteless in the slums of Orzammar. He/She impersonated a man of Warrior caste in Orzammar's Provings, a crime punishable by death. However, the Hero's showing in the arena impressed Grey Warden Commander Duncan so much that he recruited the Hero before he/she could be executed.[2]

City Elf Origin...
The Hero of Ferelden grew up in Denerim's impoverished elven Alienage. A bitter clash with a Denerim noble during the Hero's wedding resulted in the Hero facing arrest by the city guard. The Grey Warden Commander Duncan recruited the Hero, saving him/her from a certain death sentence.[2]

Dalish Elf Origin...
The Hero of Ferelden once belonged to a clan of Dalish elves. An encounter with a tainted magical mirror corrupted the Hero; only the Grey Wardens held the cure. To save the Hero's life, the clan gave him/her up to Grey Warden Commander Duncan and the Order.[2]

Dwarf Noble Origin...
The Hero of Ferelden was born to noble House Aeducan of Orzammar, the second child of King Endrin Aeducan. After being charged with fratricide, the Hero was exiled to the Deep Roads. There, he/she met Grey Warden Commander Duncan, who recruited him/her into the Order.[2]

Human Noble Origin...
The Hero of Ferelden was the son/daughter of Bryce Cousland, Teryn of Highever. When Arl Rendon Howe's forces attacked Castle Cousland and murdered most of the Cousland family, The Hero escaped to safety with Grey Warden Commander Duncan, who then recruited him/her into the order.[2]

Mage Origin...
The Hero of Ferelden belonged to the Circle of Magi in Ferelden, residing in the tower at Lake Calenhad for most of his/her life. First Enchanter Irving recommended the Hero to Grey Warden Commander Duncan; shortly after the Hero's Harrowing, Duncan recruited him/her into the Order.[2]

If the hero slew the Archdemon...
The Hero fought and killed the Archdemon, dying in the ultimate sacrifice to save Ferelden. With the Archdemon gone, the darkspawn ranks broke; the horde was easily routed.[2]

If one of the Wardens participated in the Dark Ritual or either Alistair or Loghain slew the Archdemon...
After defeating the Archdemon and ending the Fifth Blight, the Hero of Ferelden took up the mantle of Warden-Commander. He/She began the task of rebuilding the Order in Ferelden, serving with honor until his/her disappearance several years later.[2]

If the Warden was female, became Queen of Ferelden and Alistair participated in the Dark Ritual...
After defeating the Archdemon and ending the Fifth Blight, the Hero of Ferelden was wed to King Alistair and crowned Queen of Ferelden. She and the king ruled the country together until she disappeared several years later.[2]

If the Warden was Anora's Prince-Consort...
After defeating the Archdemon and ending the Fifth Blight, the Hero of Ferelden was wed to Queen Anora. He bore the title of Prince-Consort, and the two lived happily until he disappeared several years later.[2]

After completing war table operation "Contact Hero of Ferelden"...
The Inquisition has discovered that he/she has gone west in search of a way to cure the Calling.[2]

Fort Connor was constructed by a young Arl Eamon after the Orlesians were driven from Ferelden. It was named in honor of Eamon's father, who died at the battle of West Hill—and after whom the arl named his son.

Eamon was determined for Redcliffe to stand as shining example of Fereldan strength. He constructed Fort Connor to watch the King's Highway and protect the Hinterlands against all enemies. It proved its fortitude against darkspawn during the Fifth Blight, suffering damage only when the darkspawn deployed emissaries. Eamon said proudly at the time that Fort Connor was "unbreakable by anything short of magic, and for that, thank the Maker we have templars."

That the lush and beautiful Grand Forest Villa is so far from Redcliffe Castle seems odd only until one learns the history behind its construction. More than an age before the Orlesian occupation of Ferelden, Arl Jacen Guerrin ordered its construction to serve as comfortable living quarters for his "close friend," famed singer and swordsman Ser Corram the Bard. Arlessa Marguerite, Jacen's wife, evidently understood and supported her husband's relationship with Corram—only stipulating that the bard not live at the castle to avoid any public scandal.

"Arl Jacen's Ride" was a popular tavern song for many years, jokingly honoring the arl's attempts to return from the villa before the sun rose. Ser Corram lived happily there until his death in bed at the age of ninety, several years after the death of Arl Jacen himself. The aged Arlessa Marguerite ordered Corram's body burned with full honors in a hunting cloak that belonged to the arl.

After Ser Corram's death, the villa was used by the arl's family for guests and as a summer home for younger family members. It was abandoned during the chaos of the Fifth Blight.

I don’t care if it’s the best land on the farm, the farmers remember the old ways and the old blood, and we’ll honor that, just as I honor you twisting the old horseshoe nails into circles and sneaking them into the horses’ saddles for luck. If the farmers want to leave that tree to honor Tyrdda’s leaf-eared lover, we’ll let it be, and whatever we lose from the land, we’ll gain in loyalty.

If I come back and find that tree gone and you and Bron blustering some story about it falling in a storm, I’ll get the truth from Seanna, and you’ll be sleeping in those stables you love so much.

A statue of Maferath grieving after the death of his wife, the prophet Andraste, whom he betrayed out of jealousy.

The dragonlings' nest is marked with patches of blackened stone, bones, and a few very charred picks that were evidently used as makeshift weapons, although not well.

Tell the tale of Tyrdda Bright-Axe, mountain maker, spirit's bride:
Free, her people, forged in fastness, made in mountains, hardy hide.
Wise in wisdom, calm in counsel, great in gifts her grateful guests,
Sacrificed she did to spirits, took their teachings, followed quests.
Bright her axe, unbreaking crystal, stirred to flame when temper flies,
Gifted from her leaf-eared lover, laughing lady of the skies.
Bested blades of all who tried,
Maiden, spurning all requests,
Tyrdda Bright-Axe, Dreamer's Eyes.
Avvar-Mother, of her making.[6]

Thelm Gold-Handed, fingers greasy, jeweled rings with glitter shone,
Took in tribes in times of trouble, fed them fat to weaken bone.
Warriors great and great in number, sun-kissed swords to fight his wars,
Drake-scaled shirts their bodies covered, heart-wine stained the salty shores.
Told his tribes a tale of treasure, over sea to north it gleamed,
Whispered words to drive the droves to golden city where he dreamed.
Counseled quick in dreams alone,
Voices wiser man ignores,
Pushed the tribes until they screamed,
Heed the dreams and cross the Waking.[6]

Honey-tongued was Thelm to Tyrdda, gifts of gold and steel to start,
Wanted Tyrdda's men for warriors, stolen tribe from stolen heart.
Cold, her tribe, the Gold-Hand counseled, lean from winter's wind-knife chill,
"Be my bride and cross the Waking, eat the gilded city's fill."
Tyrdda Bright-Axe, fraught with fury, crystal axe-head stirred to blaze,
Heeded well her leaf-eared lover, unabashed by lustful gaze.
"None shall break my tribe apart,
Not with demon-words that kill,
Fear my fury's fiery rays,
Dream-words lie, their thirst unslaking."[6]

The Burial of the Beast[edit | edit source]

Tyrdda Bright-Axe, bold and bloodied, took her tribe from placid plains,
Tribes with blades by farming blunted chased and fought, their parting pains.
To the mountains, shorn of shelter, snow-slicked peaks gave wind its bite,
Found a cave to save her tribe, but dragonfire lit the night.
Beast no blade could break came roaring, mountains slipped their winter gown,
Tyrdda shouts to leaf-eared lover, "You I chose above a crown!"
Lightning split the spitting rains,
Sundered over prideful heights,
Dragon fell in rubble down,
Crashed and crushed in earth's mad shaking.[6]

Tyrdda Bright-Axe, proud her tribe, free from fallow fat below,
Built in battle, fed on fighting, strong from struggle did they grow.
Deep in caves, the stone-men tribe, Hendir's warriors, stout and strong,
Met the tribe with axes ready, armor gleaming, sword-blades long.
Spoke with Tyrdda did her lover, gentle whispers soft she made,
Dwarven hearts were sundered, simple, still with honor. Thus she bade:
"Let the tribe the dwarf-men know,
In their caves, where they belong,
Not with battle but with trade,
Hendir's dwarves, give peace unbreaking."[6]

The Departure of Her Lover[edit | edit source]

Tyrdda Bright-Axe, Dwarf-Friend Chieftain, with her leaf-eared lover lay,
Woke she did to love-sweat morning, lover gone in light of day.
Dream-words whispered, spoken soft, still the silence crushed and crashing,
Dead her tribe, unless a child could keep her line in warrior fashion.
Aval'var, so named the lover, called "our journey, yours and mine,"
One day child of Tyrdda's blood, Morrighan'nan, in strength must shine.
Lover's whispers to obey,
Hendir, dwarf-prince, friend in passion,
Babe produced to serve the line,
The Avvar tribe, her name, our taking.[6]

Tyrdda Bright-Axe, Avvar Chieftain, strong her tribe with dwarven trade,
Battles brought to men and demons, won with wisdom, fire, and blade.
Then did Tyrdda look to Hendir, dwarf-prince friend, children-giver,
Took her freedom, Hendir glad, wished her what he could not give her.
Chose her child to stand as chieftain, after all last wrongs were righted,
Gifted goods of worldly want, left her tribe no more benighted.
Skyward, one last trek she made,
To her lover, dream-delivered,
Raven-feathered, reunited,
Hearts both whole, now neither aching.[6] 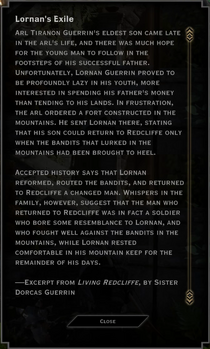 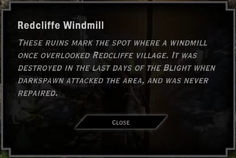 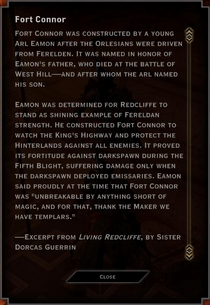 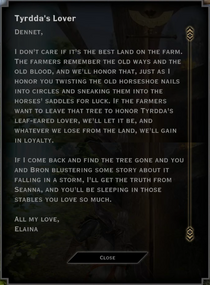 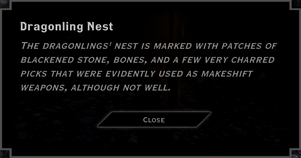 Dragonling Nest Landmark Text
Add a photo to this gallery

Retrieved from "https://dragonage.fandom.com/wiki/Landmarks_in_the_Hinterlands?oldid=884125"
Community content is available under CC-BY-SA unless otherwise noted.