Landmarks in the Emprise is landmark collection in Dragon Age: Inquisition.

Triggered when any Emprise landmark is found.

There are 11 landmark locations in Emprise.

Repair Judicael's Crossing to gain access to the new area unlocked across the bridge to acquire the following three landmarks:

When the sun shines upon the waters of the cascade falling from their great height, they seem for all the world like a cascade of crystals, pouring out of an unseen hand.

—Brother Ferdinand Genitivi, who bathed in the pool beneath the Crystal Cascade in his travels

The area around Sahrnia has always displayed a blend of the old and the new, elven and Orlesian. I take pride in this; Emprise du Lion is part of the Dales, and our history is nothing to be ashamed of. Others have not held such an enlightened view, and elven relics once scattered about the region have been destroyed or stolen. Some of the few remaining are statues of wolves, one along Alphonse's Passage, another in a ruin near the Elfsblood River. Dalish clans passing through often honor these statues with offerings of flowers. I see no harm in it.

The villagers of Sahrnia know little about the ruined highway standing above their home. Children play below its arches, oblivious to the danger the crumbling structure poses. Judging from its age, and the statues adorning its pillars, I would conjecture that it dates from the golden age of the Tevinter Imperium. It is an imposing sight, one I am glad to have seen.

—From In Pursuit of Knowledge: The Travels of a Chantry Scholar by Brother Genitivi

I have marked areas of interest on the maps provided. I would draw particular attention to Valeska's Watch, an old Grey Warden outpost. It guards a Deep Roads entrance sealed after the Third Blight.

Because of the entrance's size, the Warden feared darkspawn would find a way through despite their efforts. Senior Warden Valeska recommended they build a fort over the collapsed tunnel, so Wardens could always guard it; they did so for centuries.

The Grey Wardens' disappearance means Valeska's Watch is now unguarded. If the seal over the entrance has degraded, darkspawn may infest it. Be wary when entering this area. The blight is a slow death, and one I would save you all from suffering.

The seal holds. With the Fifth Blight rumored to be starting in Ferelden, most of the spawn will have moved east. I still hear scrabbling occasionally. Would they try to dig their way through? Perhaps they sense us.
I recommend that we reinforce the barricades. 'Tin then, so long as we stay vigilant, all should be well.

—From the writings of Grey Warden Cayten, dated 9:30 Dragon

The Tower of Bone is so named for the hundreds of human bones discovered in a hidden chamber beneath the flagstones. The bones were cremated in accordance with Chantry law, and the chamber cleansed and sealed.

Local tales of the tower and its grisly contents abound. Some believe Tevinters built the structure, reinforcing its foundations with blood magic. In other tales, elves built the tower. My favorite is particularly imaginative. In this story, a blood mage summoned a greater pride demon, who then possessed the entire tower. When the mage died, his sons were unable to control the demon, so they commissioned eight monstrous iron chains intended to hold it. The touch of the cold iron chain is the only thing holding the stone abomination in place. Should they break, the tower will pull itself off its foundations and walk, destroying everything in its path.

—From The Highlands of Orlais by Lord Ademar Garde-Haut, royal historian[2]

The grand bridge named Judicael's Crossing was constructed in 8:56 Blessed to celebrate the coronation of Emperor Judicael I, as a testament to the skill of Orlais' greatest engineers. The bridge replaced an ancient fallen highway leading to the Pools of the Sun. At the bridge's ceremonial dedication, the emperor's sister, Grand Duchess Leontine, led a dozen nobles and their entourages in a stroll across the bridge to the hot springs, where they took the waters.

Judicael's Crossing's structural supports bear architectural and decorative elements that mimic those of the ancient Tevinter highway it replaced. One can see their like several miles away in the archways rising above the village of Sahrnia. The Andrastian statues that decorate the walkway, however, are entirely Orlesian in style.

—From The Highlands of Orlais, by Lord Ademar Garde-Haut, royal historian[3]

I took a quick tour around the quarry in Sahrnia, famed for its azure granite. The owner of the mine, Alban Poulin, proudly informed me that five hundred blocks of stone from that very quarry were used to tile the bathing chambers of Lady Mantillon's summer estate.

Hector in his Time of Dying[edit | edit source]

Hector is one of the Chantry's Anointed. In Andraste's time, he was lord of Nevarra and one of the Prophet's most loyal followers. According to some Orlesian legends, when Maferath betrayed Andraste and Tevinter captured her at Hector's stronghold in Nevarra, Hector leapt to her defense and was shot full of arrows. He survived long enough to see Tevinter soldiers drag Andraste away.

In this particular depiction, Hector appears as a young and handsome man, lounging in a position many consider "inappropriate" to the depicted subject. Some have decried the statue, arguing that Hector seems to be greeting a lover, rather than grieving the betrayal of his Prophet.

—From The Highlands of Orlais by Lord Ademar Garde-Haut, royal historian

Pools of the Sun[edit | edit source]

According to our legends, what remains of the sun's heat - left in the Earth when Elgar'nan threw the sun from the sky and buried it in the abyss - heats the hot springs in the Dales. The waters of the spring have healing qualities; we have always treated them as sacred. Then, of course, Orlesians moved in, scarring them with their garish statuary. But Fate is just. Last I heard, dragons had claimed the territory. Let's hope the beasts made a meal of fat nobles who couldn't escape in time.

—Penned by an unknown Dalish elf

The statues decorating the Pools of the Sun depict Havard, Aegis of the Faith and Disciple of Andraste, bearing the Prophet's ashes to safety. However, when Grand Duchess Leontine commissioned the statues for placement around the hot springs, she recommended her steward Bellamy to the sculptor for use as a model. Rumor has it that Steward Bellamy was Leontine's lover, and she wished to see his heroic form wherever she turned.
Leontine commissioned at least a hundred of the statues.

—From The Highlands of Orlais by Lord Ademar Garde-Haut, royal historian 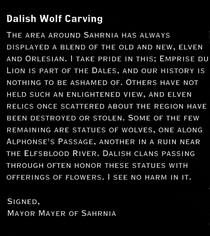 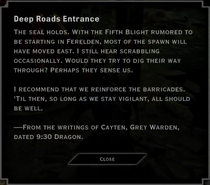 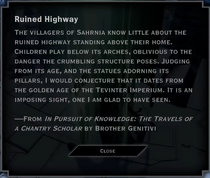 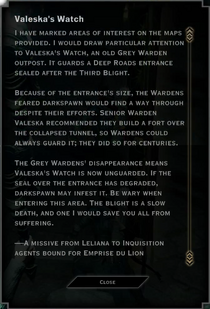 Valeska's Watch Landmark Text
Add a photo to this gallery

Retrieved from "https://dragonage.fandom.com/wiki/Landmarks_in_the_Emprise?oldid=881468"
Community content is available under CC-BY-SA unless otherwise noted.