Edit
watch 02:05
Wiki Targeted (Games)
Do you like this video?
Play Sound
“The Maker's work is being done today, nothing else.”

Lord Seeker Lambert van Reeves is the head of the Seekers of Truth, the enigmatic military wing of the Chantry which is responsible for supervising the Templar Order and dealing with more sensitive matters.

Lambert was born in 8:92 Blessed in northern Orlais, as the cousin to the wealthy Montbelliards of Churneau. At the age of sixteen, he was determined to follow a righteous path of defending the weak, guard against the wicked, and exalting the righteous. Thus, rather than pursue a life of an Orlesian noble as his father and grandfather did, he asked Comte Etienne to sponsor his entry into the Templar Order. Ser Lambert served with distinction at the Circle of Magi in Ghislain and eventually achieved the rank of knight-captain in 9:17 Dragon. During that year, he was charged with leading a group of templars in recapturing a group of escaped Apostates in the border of the Tevinter Imperium. His apostates were taken captive by a larger group of Imperial Templars in the city of Caimen Brea. The confrontation with the Imperial Templars would have led to war but Lambert was able to negotiate with them in order to prevent a catastrophe. This earned him the respect and friendship of the Imperial Templars' leader: Magister Urian Nihalias; and also renown with the Seekers of Truth which he was inducted into in 9:21 Dragon.

At Urian's request, he served as the Seekers' liaison to the Tevinter Imperium. He became dismayed at the magical corruption of Tevinter and became more sympathetic to Urian's belief that extreme measures were needed to reform Tevinter. In 9:27 Dragon, Ser Lambert was the subject of scandal back in Orlais as he had participated in a coup that led to the arrest of the Black Divine and five high ranking magisters; while also elevating Magister Urian as the new Black Divine.

In 9:31 Dragon, Lambert returned to Orlais a cynical man. Impressed by Lambert's renewed determination and zealous devotion to his duty, Lady Seeker Nicoline stepped down and passed her position to Lambert in 9:37 Dragon—notably over the objections of Divine Justinia V who had interviewed Lambert beforehand and found him too conservative.[1]

Lambert was once sympathetic to the idea that magi should be given the benefit of the doubt and be allowed to train themselves by their own kind. That feeling quickly disappeared when Lambert's closest friend, Urian Nihalias, a respected magister whom he regarded as an example for others, became the current Black Divine of the Imperial Chantry. Once that happened, the new Divine quickly became concerned only with keeping his position no matter the cost, even if his rivals tried to overthrow him by resorting to forbidden blood magic. He countered and fought them back by resorting to these arts as well, to match their power. Eventually, he also began to stonewall the Tevinter Templar Order, diminishing its power and blocking their members from performing their duty, in order to protect other magisters whom Lambert helped rise to power, but who were deep down as corrupt and power hungry as the Black Divine, and did not want their wickedness to become known to the public. This led Lambert to confront the Black Divine and question his abuse of power, but he was instead chastised and ridiculed as being naive and ignorant to the concept of power's true meaning. Lambert eventually left the Imperium entirely and returned to the Seekers of Truth in Orlais.

Following the attempted assassination of the Divine Justinia V by a renegade Senior Enchanter named Jeannot, Lord Seeker Lambert removes Knight-Commander Eron and takes control of the White Spire Circle in Val Royeaux to investigate as to whether he had co-conspirators. During his questioning of Rhys, he suggested that from his work as a spirit medium, he may be working with demons, to which the mage insisted that merely communing with spirits is much more complicated. He then pressed Rhys for the identities of Jeannot's close associates, but was refused, as the mage believed he was trying to string together a conspiracy. Upset at his defiance, Lambert ordered him out of his sight.

Weeks later, after Rhys was imprisoned for wandering the dungeons with no explanation for his behaviour, he was summoned after the arrival of his mother, Archmage Wynne. Wynne revealed that she need Enchanters Rhys and Adrian to rescue a Tranquil named Pharamond, who had become possessed. The Lord Seeker firmly refused to accept the possibility that the Rite of Tranquility had failed or worse reversed, as it was suppose to make Tranquil immune to demonic possession. When Wynne insisted on Rhys accompanying her, Lambert refused, believing him involved in the attack on the Divine. Wynne then produced the Divine's seal, which gave her the authority to perform her mission as she saw fit. Despite this, he insisted on sending Knight-Captain Evangeline de Brassard along with them to keep an eye on them. Later, he privately met with Evangeline, to provide her with vials of lyrium for the journey to Adamant Fortress and gave her orders to take whatever steps are necessary to ensure any information which proves that the Rite can be reversed or is somehow ineffective is never to reach outside ears. As a precautionary measure, he sent Ser Arnaud with a company of twenty templars to rendezvous at Adamant without Evangeline's knowledge, though the Knight-Captain turned down their assistance.

Upon the expedition's return, Lord Lambert is disappointed to learn that Evangeline has not followed his orders. As Pharamond explains that making contact with a spirit or demon can restore a Tranquil, Lambert becomes incensed, claiming it to be blasphemy. When Rhys and Adrian speaks out against him, Lambert goes for his sword, only to be restrained by Leliana. Lambert then attempts to persuade the Divine to have the four mages executed before word of Pharamond's recovery gets out, only for Wynne to reveal that she has already spread the news to all Circles of Magi. He objects (in vain) to Divine Justinia's orders to convene a conclave of First Enchanters from across Thedas and Grand Enchanter Fiona at the White Spire to evaluate Pharamond's research into the Rite. However, he is able to convince the Divine to render Pharamond Tranquil once more, arguing that he's still vulnerable to possession, but would retain his knowledge to share with the conclave.

In anticipation of the conclave, Lambert removes Evangeline from her post as Knight-Captain for insubordination and replaces her with Ser Arnaud, reassigning her to guard the White Spire's dungeons. Three weeks pass by before he answers her summons to privately discuss Cole, the alleged Ghost of White Spire, whom the Knight-Captain claimed was responsible for the murders within the tower. Though they reach an agreement that Tranquility should be used on Cole, they disagreed on how best to handle the mages; Lambert believed that a repeat of the incident at Kirkwall was inevitable unless the Chantry took a firm hand with the mages, while Evangeline argued that trying to suppress further rebellion with even more draconian constraints upon the mages would only make matters worse and most likely incite further violence.

When the Grand Enchanter uses the conclave to call a vote to separate from the Chantry, Lambert accuses the mages of treason, demanding they surrender or face execution. He also reveals that a knife covered in blood was found in Rhys' chambers and that Pharamond was stabbed to death. Suspecting the Lord Seeker is attempting to frame Rhys, the mages refuse to stand down, so Lambert orders the templars and seekers to attack, taking Rhys prisoner during the battle.

Lambert then interrogates Rhys and attempts to convince him that his invisible companion Cole is a demon, and that he has been under its influence, as the Lord Seeker has found no records of a mage by that name. He attempts to get a confession out of the young enchanter that he was being used by the demon, threatening to execute him, Adrian and all the first enchanters if he didn't comply. However, this serves only to fuel Rhys' uncertainty over who the real murderer is and whether the Lord Seeker framed him, so Lambert leaves him be.

Before long, Lambert is recalled to the Grand Cathedral by the Divine, who thus knowingly assists in the mage's subsequent breakout. Realizing the Divine's ploy, Lambert quickly returns to the White Spire and confronts Cole and Rhys, tracking them through use of the mage's phylactery. Correctly deducing that Cole is either a demon or a spirit, he uses the Litany of Adralla to disrupt Cole's abilities before overpowering him, grabbing him by the throat. Rhys stood up in defense of Cole, in spite of the revelation that it was Cole who was exploiting him, stating that not all spirits and mages should be judged the same. But before Rhys could attack, Cole accepted the truth and vanished, causing the mage to lose the will to fight. Expressing disappointment in the Enchanter, Lambert reveals that he wanted an excuse to put down the mage rebellion. He is then confronted by Evangeline, who chose to side with the mages. They duel, the Lord Seeker managing to inflict fatal wounds on Evangeline before being forced to retreat by a group of pursuing mages.

Following the mages' escape, Lambert summons fifteen Knight-Commanders to assemble an army to attack the apostate mage host assembled at Andoral's Reach. Viewing the Divine's part in the escape as proof that the Chantry has failed in its duty to uphold the Maker's laws, he writes a letter to the Divine, annulling the Nevarran Accord, separating both the Templars and the Seekers of Truth from the Chantry. He then predicts that once the Templars have successfully crushed the mage rebellion in one fell swoop, the Chantry will be forced to elect a new Divine more inclined to adhere to the status quo.

After Lambert retires to his bed, he is held at knifepoint by Cole who reveals that there was a mage named Cole who was imprisoned in the Spire but was forgotten about by the Templars and comforted in his final moments by the spirit that later took his form. The Templars who guarded him covered up all evidence of his death to hide their shame, and the spirit was helpless to act at the time. Cole tells Lambert to "Look into his eyes", the same mantra he recited to his other victims, before killing Lambert.

Lambert's death is mistakenly presumed to be retribution from the mage rebellion. Lucius Corin succeeds Lambert as Lord Seeker and continues his predecessor's crusade.

Cassandra Pentaghast later reads the Book of Secrets, the tome kept by all the Lord and Lady Seekers, and learns that Lambert had always known to how to reverse the Rite of Tranquility, hence why he acted as he did against the Circle.

In his conversations with Cassandra, Cole mentions that he saw into Lambert's mind, discovering that he planned on overthrowing the Divine after he had crushed the mage rebellion. Upon hearing Cole's testimony, Cassandra concedes that if true, Lambert deserved to die for his actions, but notes that another means of bringing him to justice might have been better, as the templars and Seekers interpreted Lambert's death as an assassination carried out by the mage rebellion in retaliation for his actions at the White Spire, causing the fighting between the two sides to intensify as a result. 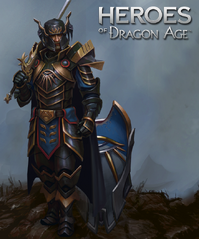