For the merchant, see Korpin.

“Once, in the Deep Roads, I held off a group of darkspawn for two days.”

Legion of the Dead
Inquisition

The College of Magi
The Arl of Redcliffe

Korbin is a player-controlled protagonist in Dragon Age: Inquisition's multiplayer.

Korbin is a highly regarded dwarven warrior from Orzammar who volunteered for the Legion of the Dead. As a result of the alliance between the dwarven king and the Inquisition, Korbin now fights on the surface against Thedas' greatest threats.

In fact the truth regarding Korbin's joining the legion is more complex. Korbin was sentenced to join the Legion for killing a noble however Korbin did not actually commit the murder but instead chose to conceal the truth and voluntarily join the Legion of the Dead.

Korbin is involved in various war table operations. He can also sometimes be seen on the battlements at Skyhold with two other agents, near where Cullen is stationed. He can't be spoken to however.

The College of Magi 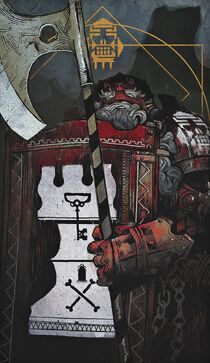 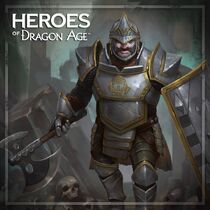 Retrieved from "https://dragonage.fandom.com/wiki/Korbin?oldid=886900"
Community content is available under CC-BY-SA unless otherwise noted.