Edit
watch 03:01
Wiki Targeted (Games)
Do you like this video?
Play Sound
“Why do we need ashes when we serve the risen Andraste in all Her glory?”

The Urn of Sacred Ashes
A Test of Faith

Kolgrim is a father to the Haven Chantry as well as the leader of the Disciples of Andraste cult, based in the village of Haven.

Kolgrim's ancestors are the founders of the Cult of Andraste, the Dragon worshipping cult of the Haven Village, based high in the Frostback Mountains. As such, Kolgrim serves as their leader and liaison to the High Dragon, believed by the cultists to be the reincarnated Andraste. Like the other cultist Reavers, Kolgrim possesses enhanced physical strength and endurance as a result of drinking the blood of Dragonlings. However, his power far exceeds that of his underlings.

Brother Genitivi's research regarding the Urn of Sacred Ashes has led him, along with many knights, to encounter the thralls of Kolgrim and his cult.

During The Urn of Sacred Ashes quest line, before reaching the Mountain Top in the Caverns under the Ruined Temple, you are confronted by Kolgrim, and a few cult followers. Kolgrim speaks of the great Andraste and how she has been reincarnated as a great dragon. He asks you to desecrate the ashes by pouring the dragon's blood into the urn. According to him this would make you Andraste's champion. If the Warden chooses to follow his offer, he or she will be granted the Reaver specialization. See Kolgrim's Offer for details.

If you refuse his offer, or insult his religion he will attack. A good strategy is to ensure you first take out any mages. They will immediately use Misdirection Hex on your character making your attacks worthless. They also make use of Cone of Cold and Paralyze spells. Once the mages have been dealt with you can focus on Kolgrim and rest of the enemies.

Kolgrim carries a two-handed axe; he therefore attacks slowly but will deal a good amount of damage with each successful hit. Thus it is best to pit him against a party member with high defense score and apply attack penalty on Kolgrim to effectively reduce his damage output. His health is substantial but is offset by his light armor, making all damage types effective.

Once he is defeated he will drop Kolgrim's Horn (pc

only) which will allow the Warden to summon and fight the high dragon, on ps3

the Warden only needs to interact with the gong, no actual item is necessary.

The number of enemy combatants, e.g. 2,3 or 4 warriors depends on your difficulty.

Faith's Edge - after defeating Kolgrim, a rather useful battle axe. 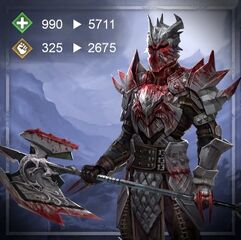 Kolgrim in Heroes of Dragon Age

Tier progression of Kolgrim in Heroes of Dragon Age

Artwork of Kolgrim's tier progression in Heroes of Dragon Age
Community content is available under CC-BY-SA unless otherwise noted.
Advertisement