The Kirkwall City Guard is the official army of Kirkwall. Answerable to the viscount, it's responsible for law and order in Kirkwall and its surroundings. While the Templar Order concerns itself with apostasy and demonic possession, matters of crime and contraband fall to the City Guard who walk the patrols and undertake the investigations.

When Kirkwall was known as Emerius, it was guarded by the Fourteenth or "Black" Cadre. As one of the worst postings in the Tevinter Imperium, it was not uncommon for convicted criminals to be posted here. After a slave rebellion, the city was thrown into chaos. Only once the Templar Order made their headquarters in the Gallows was order restored.[1]

During this time, Orlais sent an army of chevaliers led by Ser Michel Lafaille to rule the city. Ser Michel saw a need for a permanent armed force to defend the city and to keep the templars in check. Subsequently, the Kirkwall City Guard was formed in 7:60 Storm. However, their power proved to be no match for the templars as was demonstrated when Viscount Perrin Threnhold unsuccessfully tried to eject the templars in 9:20 Dragon.[1]

Despite the racial tensions between the humans and the elves being commonplace in most human cities, the Kirkwall City Guards seems to recruit elves in its ranks.

The Kirkwall City Guard heraldry is a variation of the modern Kirkwall heraldry in the shape of a dragon. 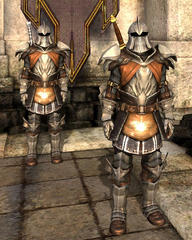 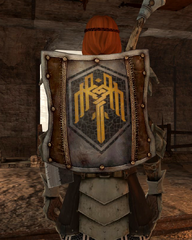 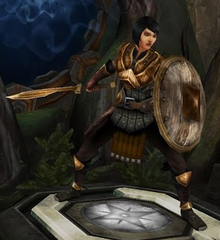 Retrieved from "https://dragonage.fandom.com/wiki/Kirkwall_City_Guard?oldid=886326"
Community content is available under CC-BY-SA unless otherwise noted.