Kirkwall, also known as The City of Chains and historically as Emerius, is a coastal city-state and a major population center located in the Free Marches. It is on the southern edge of the Vimmark Mountains, east of the Planasene Forest, and north across the Waking Sea from Ferelden.

Kirkwall has changed hands many times and has always been a valuable port, the nexus of nearly all trade that flows between the Free Marches and Ferelden. Natives of Kirkwall are known as "Kirkwallers". [1]

The city's complicated past is not easy to forget, history having earmarked many corners of the stone city. A ship approaching the harbor spots the city's namesake: an imposing black wall. It is visible for miles, and carved into the cliff side are a pantheon of vile guardians representing the Old Gods. Over the years, the Chantry has effaced many of these profane sentinels, but it will take many more years to erase them all. Also carved into the cliff is a channel that permits ships into the city's interior. Flanking the channel are two massive bronze statues—the Twins of Kirkwall. The statues have a practical use. Kirkwall sits next to the narrowest point of the Waking Sea, and a massive chain net can be erected between the statues and the lighthouse, closing off the only narrow navigable lane. This stranglehold on sea traffic is jealously guarded by the ever-changing rulers of the city as the net trolls taxes, tolls, and extortions in from the sea.

—Excerpt from Codex entry: The City of Kirkwall

The area of Kirkwall was once inhabited by a barbarian people, though the histories are unclear on whether these were Alamarri, Daefads, or another group.[2]

Kirkwall was founded on the edge of the Tevinter Imperium under the name Emerius in -620 Ancient, after its founder Magister Emerius Krayvan.[3]The quarries of Emerius provided Minrathous with the jet stone it needed to build its mighty temples[4][5], though later research shows that the Imperium was unaware of Kirkwall's mineral wealth at the time of its founding.[2]

After a slave rebellion in Minrathous and a failed assassination attempt on Archon Vanarius Issar by an elven slave, it was decided that a center for the slave trade would need to be established away from the heart of the Imperium. As the new slave outpost would become incredibly wealthy, a vicious competition between prospects raged for over two decades, allegedly resulting in the deaths of more than half the slaves in existence at the time. Emerius was finally chosen after Magister Krayvan's son married the archon's daughter. The Krayvan family would go on to patronize the next three archons and push for the expansion of the Imperial Highway into the Fereldan Valley, a move which cost them a lot of influence when the Imperium met with Alamarri resistance.[5]

At its height, Emerius was one of the mightiest Imperial cities, with nearly a million slaves living and working in the city, producing jet stone and steel.[3] It was guarded by the Fourteenth Cadre, more commonly known as The Black Cadre. It was considered one of the worst postings in the Imperium.[6]

In the wake of the First Blight and Andraste's invasion, the Imperium's borders receded. Numerous warlords tried to consolidate their power into a single kingdom, but Emerius held out for almost a century. The magisters were finally overthrown in -25 Ancient, after their assassination of a popular Alamarri slave named Radun led to a massive slave revolt. The magisters were hanged, the city burned, Hightown sacked. Emerius was renamed Kirkwall after its jet stone cliffs ("kirk" meaning black). The new city plunged into anarchy for over a decade.[7]

In 5:21 Exalted, at the height of the Fourth Blight, Kirkwall was one of several cities in the Free Marches threatened by the advance of the darkspawn horde. The Grey Wardens were able to evacuate many thousands of refugees from the city to a safe haven in the Vimmark Mountains, albeit at a high cost in Warden lives.[8]

In 7:56 Storm, during the third New Exalted March, Qunari invaders took Kirkwall in a night raid. They occupied Kirkwall for four years, forcibly converting much of the populace to the Qun and making them work in labor camps previously manned by slaves. It was liberated by Orlesians under the chevalier Michel Lafaille, who was appointed Viscount in 7:60 by the emperor. He pursued a campaign of religious reeducation and formed the Kirkwall City Guard to act as the city's defenders.[9][6]

In 8:05 Blessed, Kirkwall rebelled against Orlesian rule and gained independence, but maintained the title of viscount as its ruler.[10]

At the onset of the Dragon Age, Chivalry Threnhold became Viscount of the city. Historical accounts paint him as a vicious thug who took power through a campaign of intimidation. His son Perrin succeeded him in 9:14. After he used the harbor's ancient chains to block sea traffic in the Waking Sea and charge exorbitant fees from Orlesian ships, Divine Beatrix III ordered the city's templars to pressure him into reopening the Waking Sea passage.[11] As a result, in 9:21 Dragon, Viscount Perrin Threnhold attempted to expel the Templar Order from Kirkwall, killing Knight-Commander Guylian in the raid of the Templar stronghold. Knight-Templar Meredith Stannard and a group of her best templars marched on the Viscount's Keep and had him arrested, thrown in his own dungeons and stripped of his title. She was promoted to Knight-Commander by Grand Cleric Elthina soon after. With the Chantry's support, Meredith appointed Marlowe Dumar to succeed Perrin, though she remained the true authority in the city from the Gallows.[12]

In 9:31, Qunari set out to meet Orlesians who have agreed to return the Tome of Koslun to them. However, the book is stolen by a Rivaini pirate. As the Qunari give chase, the thief leads their ship into a storm to try and escape them, leading both their ships to founder on the coast of Kirkwall. The Arishok and his surviving army refuse to leave without the Tome of Koslun and remain in the Qunari Compound.

In 9:34, following years of tension between Kirkwall's denizens and the Qunari, stoked by a faction within the Chantry, the Arishok attacks the city, starting the First Battle of Kirkwall. He kills Viscount Marlowe Dumar in the Viscount's Keep. Hawke's actions during the liberation of the city put a stop to the invasion, for which they are named the first "Champion of Kirkwall" by Knight-Commander Meredith Stannard.

In 9:37, the apostate mage Anders destroys the Kirkwall Chantry and kills Grand Cleric Elthina, leading Knight-Commander Meredith to invoke the Right of Annulment on Kirkwall's Circle of Magi and igniting the Kirkwall Rebellion. The magical blast that destroys the Chantry rains deadly debris on half of the city.[13] Hawke kills both Knight-Commander Meredith and First Enchanter Orsino during the rebellion, and is either named Viscount or flees the city. The events in Kirkwall inspire Circles across Thedas to rise up.


Sebastian Vael has reclaimed his title as Prince of Starkhaven and in 9:41 leads an invasion of Kirkwall. In the mission Annexing Kirkwall, Sebastian requests support from the Inquisition to help him suppress the city's resistance forces led by Guard-Captain Aveline Vallen and hunt down Anders and his associates. The Inquisitor can choose to send Leliana's agents to bolster Sebastian's forces, resulting in Kirkwall ceding much of its northern territory but ultimately ending in a stalemate, send Cullen's military to bolster Aveline's resistance forces and repel Sebastian's occupation forces back to Starkhaven, or have Josephine refuse to get involved.


Sebastian Vael has reclaimed his title as Prince of Starkhaven and in 9:41 decides to aid in the reconstruction of Kirkwall, which has continued to suffer from Anders' actions. In the mission Aiding Kirkwall, Sebastian requests that the Inquisition send in soldiers and workers. The Inquisitor can choose to heed Leliana's advice and ignore the request in order to focus resources on defeating Corypheus, have Josephine appeal to noble allies to help Kirkwall, or order Cullen to send in troops to expunge red lyrium from the Gallows and further rebuild the city.

In the two years after Corypheus' defeat, Varric Tethras has funded numerous reconstruction projects in Kirkwall. As his reconstruction efforts got the harbor and businesses running again, the nobles voted him in as the new Viscount of Kirkwall.[14] As Viscount, Varric continues his work to rebuild the city's damaged infrastructure. Under his rule, the city-state finally resumes its place as the major trade-hub of the Free Marches.[15]

Kirkwall has been governed by a Viscount since the Orlesian occupation of the city, as the title itself is Orlesian. It has never truly been free to determine its own course, and after the ousting of Perrin Threnhold the Templar Order has held considerable influence over his successor, Marlowe Dumar, and the city.

If the ruling line of a Viscount dies out due to no living heirs, then the nobility of Kirkwall will gather to elect a new line from their ranks.

This section contains spoilers for:
Dragon Age II.
After Viscount Dumar dies without an heir at the hands of the Qunari, Knight-Commander Meredith is able to block any election of a new Viscount for a number of years until her death. If Hawke chooses to side with the Templars, they are elected as the new Viscount.
This section contains spoilers for:
Dragon Age: Inquisition.
By 9:41, Kirkwall is ruled by Provisional Viscount Bran Cavin. If Hawke was previously elected Viscount, they were eventually betrayed and forced to flee by the Templars, who had become dangerously paranoid through Red Lyrium use. Bran reluctantly assumes the office only because no one else familiar with the protocols wants it. He sees his appointment as temporary, and awaits the promised return of Hawke as the legitimate ruler of Kirkwall. In the meantime, Bran spends much of his time negotiating with numerous would-be conquerors of the city while Captain of the Guard Aveline and the Kirkwall Militia ably defend it.
This section contains spoilers for:
Trespasser.
Sometime in the two years after Corypheus' defeat, Varric Tethras is elected Viscount of Kirkwall in recognition of his substantial reconstruction efforts in the city.

Kirkwall's coat of arms is a stylized knot work representation of a dragon. It evolved from a symbol of rebellion from the time when Kirkwall was a center for the Tevinter slave trade. It was an image that catalyzed the slaves to overthrow the ruling magisters. While the symbol has changed over time, its message has not: Kirkwall is a city unto itself, beholden to no one.[16] 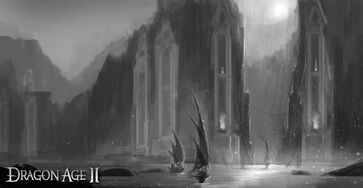 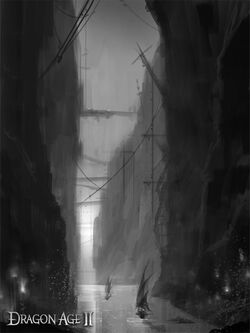 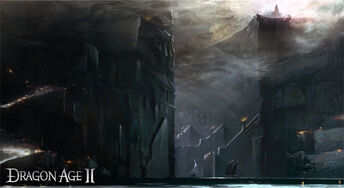 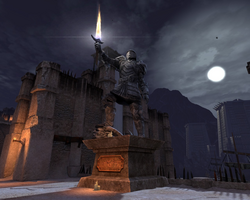 A statue representing victory over the qunari at the docks. 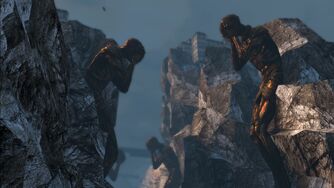 The twins of Kirkwall 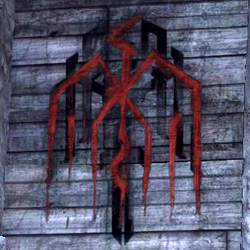 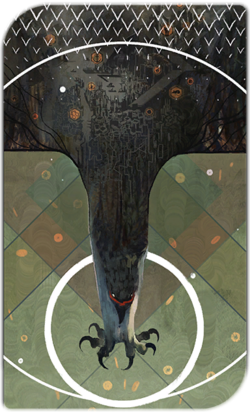 Codex entry: The City of Kirkwall

Codex entry: The City-State of Kirkwall

Retrieved from "https://dragonage.fandom.com/wiki/Kirkwall?oldid=885847"
Community content is available under CC-BY-SA unless otherwise noted.