Enemies Among Us
A Debt in the Family
Best Served Cold

Keran is a templar recruit serving in Kirkwall.

Keran is one of many templar recruits being trained in the Gallows in 9:31 Dragon, along with Hugh, Paxley, Ruvena and Wilmod.

During the quest Enemies Among Us, Macha asks Hawke to help her find her missing brother, Keran.

When speaking to the templar recruits in the Gallows, it is revealed that several other recruits have disappeared as well. Upon further investigation, it turns out that blood mages led by Tarohne have been kidnapping recruits that spent time at the Blooming Rose in order to turn them into abominations. Keran is the only surviving victim. If Merrill or Anders are present when Hawke rescues Keran, Hawke can ask them to verify if Keran is possessed. Both of them will state that he is safe.

Hawke can persuade Cullen either to allow Keran to stay with the Order, or to expel him. Hawke can also mention that they checked that Keran is not possessed without mentioning how exactly they did it via a special dialogue option.

If Keran was expelled from the Order, his father can be found in Lowtown near Gamlen's house, stumbling and drunk. Keran and Macha are standing not far away from him. The quest A Debt in the Family becomes available.

In any case, Hawke receives a Letter from Macha.

Alternatively, if Keran remained in the Templar Order then Ser Roderick will be investigating him at The Hanged Man.

Regardless of whether Keran stayed with or was dismissed from the Order, he takes part in a radical Templar-Mage group lead by Thrask which kidnaps Hawke's sibling or companion during the quest Best Served Cold. He claims to have been against the kidnapping, due to his own experience, and tells Hawke where to find them. He can then either be killed or reported to Meredith or released, in which case he intends to leave Kirkwall. If Keran is spared, he is later seen outside the Hanged Man, stating that he can't be a templar with Meredith in charge of the Order. In Dragon Age Keep there is an option in which Keran rejoins the templars under Knight-Captain Cullen's discretion and promise to keep a very close eye on the recruit, however this is not implemented in-game.

A Debt in the Family (conditional) 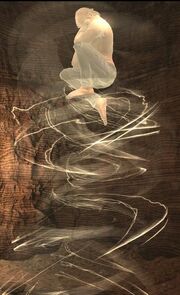 Keran in the Blood Mage Hideout
Add a photo to this gallery
Retrieved from "https://dragonage.fandom.com/wiki/Keran?oldid=895849"
Community content is available under CC-BY-SA unless otherwise noted.