Edit
watch 02:59
Wiki Targeted (Games)
Do you like this video?
Play Sound
“Magic is a curse, and I pray every day for forgiveness from the Maker.”

Keili is a religious Circle mage apprentice found in the Apprentice Quarters near the Chantry chapel of the Circle Tower.

The Magi Warden can first encounter Keili in the Magi Origin story. She will be praying to the Maker. She believes that magic is a curse, and fears herself for it. The player can either attempt to convince her that magic is not evil, leave her, or tell her about undertaking the Rite of Tranquility.

During the Broken Circle quest, she can be found near Wynne, Kinnon and Petra. If the initial conversation with Wynne goes sour and she attacks the Warden, Keili will assist her. Otherwise she'll stay with her colleagues guarding the saved children.

The Warden may speak with her briefly about the events that have happened. By now, Keili is convinced of the wickedness of magic, and believes that the mages should be 'cleansed' by the templars. She will remain in the area after the Broken Circle questline is concluded.

Her reservations about her own magical ability will not hinder her from doing what she feels is right, however. If she is present when Shah Wyrd is summoned at the culmination of the Watchguard of the Reaching quest, Keili will aid in the battle as an ally of the party alongside Petra and Kinnon, and she fights the Templars if they choose to annul the Circle - even though she claims to long for the Templars to kill her. 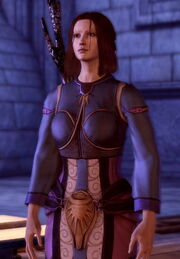 Keili during the events of the Broken Circle 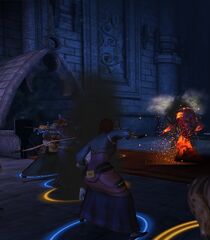