watch 02:39
The Loop (Games)
Do you like this video?
“This Inquisition must be desperate, recruiting the way they do. Just look at us.”

The Katari (lit. "One who brings death" in Qunlat) is a Tal-Vashoth mercenary fighting for the Inquisition, and one of the player-controlled protagonists in Dragon Age: Inquisition's multiplayer.

Katari was once a member of the Antaam[1], but he became disillusioned with the Qun after spending a great deal of time living in human lands. After fleeing from his commanders, however, he found it difficult to find his own way after years of being forced to follow orders. Like many who have left the Qun, Katari made use of the fighting skills learned under the Qun and became a mercenary for hire. He joined the Inquisition when it sent out the call for able-bodied soldiers.

Katari is involved in various war table operations. He can also sometimes be seen on the battlements at Skyhold with two other agents, near where Cullen is stationed. He can't be spoken to however.

He is also available as a selectable playable character in Dragon Age: Inquisition multiplayer.

Since patch 6 the Katari has increased starting health and generates guard on hit. 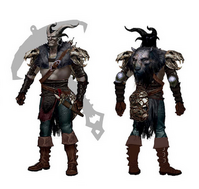 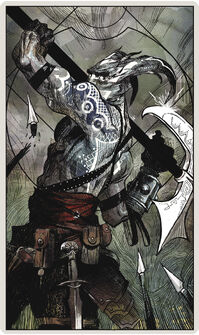 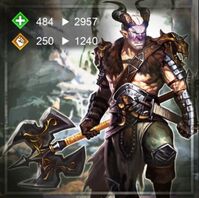 The Katari in Heroes of Dragon Age

Retrieved from "https://dragonage.fandom.com/wiki/Katari?oldid=863622"
Community content is available under CC-BY-SA unless otherwise noted.