Edit
watch 04:03
Wiki Targeted (Games)
Do you like this video?
Play Sound
“Idealism is our stock in trade, Lambert. A religion without ideals is tyranny.”

Divine Justinia V was the head of the Andrastian Chantry between 9:34 and 9:41 Dragon. Given her wordly past and her dealings with the bards of Orlais, Justinia V was reputed to be one of the finest players of the Grand Game.[1] She was succeeded by Divine Victoria, who was elected after the defeat of the Elder One.

Before her ascension to Divine, Justinia V was known as Dorothea. She served as a Mother in the Valence Chantry in Orlais,[2] then became a Revered Mother. After Divine Beatrix III died from a stroke in 9:34 Dragon, she left behind the name of her preferred successor, Dorothea, as tradition dictated. Dorothea was elected Divine, though with some controversy among the grand clerics due to her colourful past.[3]

Dorothea first met Leliana when she was still a Revered Mother. A member of the Orlesian Chantry, she was seduced by Marjolaine who then stole a set of secret documents from her that could potentially start a new war between Orlais and Ferelden. To retrieve them, she travels to Ferelden without sanction.

She assists Leliana in escaping Commander Harwen Raleigh by supplying her with a key to her cell door and a knife. After Leliana's escape, she asks her to retrieve the stolen secret papers from Marjolaine and provides Leliana with information on the location of Marjolaine and Raleigh. She also serves as a source of inspiration to the young bard, motivating Leliana to dedicate herself to the Maker's cause.

In 9:37 Dragon, following a string of small mage revolts, Justinia V dispatches a trusted agent to Kirkwall to gather information on the threat, believing its problems were spurred on by outside groups. After assessing the situation and assassination threats, the agent passes the Divine's message along to the Champion of Kirkwall and Sebastian Vael: Kirkwall is no longer a safe place for Grand Cleric Elthina, so she must flee to the Grand Cathedral in Val Royeaux. The Grand Cleric, however, declines the Divine's offer and ultimately becomes the first casualty of the Mage-Templar War, her death and the destruction of the Kirkwall chantry serving to incite the Thedas-wide conflict.[4]

Three years later, Justinia sends a contingent of Seekers still loyal to her to Kirkwall to locate its Champion, who was present during the events during and leading up to the outbreak of the war. She hoped to recruit the Champion as the leader of the Inquisition, believing that the Champion's influence amongst the opposing factions would help them reach a resolution.

Shortly after her installment as Divine, Justinia discreetly began to investigate the treatment of mages by the Chantry. She believed in improving the Circle of Magi, but centuries of Chantry tradition prevented her from simply commanding the templars to follow her vision, which many would resist. To this end, she had secretly ordered a Tranquil named Pharamond to research ways to protect weaker mages from demonic possession without resorting to the Rite of Tranquility. Arch-Mage Wynne was charged with monitoring Pharamond's progress. Five years later, Wynne learned that Pharamond had become possessed by a demon, something that theoretically cannot happen to a Tranquil. Justinia authorized Wynne to rescue the man and discover the results of his experiments, leading to Wynne's expedition to the Adamant Fortress.

Wynne returns from Adamant with the discovery that Tranquility can be cured and supplies Justinia with evidence in the newly restored Pharamond. Publicly, Justinia expresses concern and caution about the results and implications of Pharamond's research. However, she turns a blind eye on the fact that Wynne has already sent the formula for the cure to every Circle of Magi in Thedas before her return to Val Royeaux.

In the wake of the news, all First Enchanters travel to the White Spire for a conclave to discuss the implications of Pharamond's discovery. When the mages use the conclave instead to vote on the separation of the Circles from the Chantry, the templars and mages clash in a bloody confrontation that results in many deaths and the incarceration of the remaining mages. Justinia aids the mages again by dispatching her agent, Leliana, and summoning Lord Seeker Lambert to her side to distract him at a critical time. The freed mages raise a revolt inside the White Spire, destroying their phylacteries and killing many templars. After regrouping at Andoral's Reach, mages from across Thedas renounce their ties to the Chantry. In 9:40 Dragon, Lambert, citing Justinia's role in the mages' escape from the Spire, nullifies the Nevarran Accord and thus severs ties between the Chantry and its martial arm, the Templar Order and the Seekers of Truth.

Justinia sends Leliana to the University of Orlais to speak to Empress Celene regarding the political instability in the empire. Celene suggests Justinia take a stand and make an appeal to reason on the Mage-Templar War to give Celene three weeks to deal with the nobles. Celene is, however, unaware of Justinia's secret years-long investment in Pharamond's research into reversing Tranquility.

Leliana later returns to Celene with a message from Justinia: encouraging her to take action against rumors of her elf favoritism that were eroding her power base and destabilizing Orlais, leading to the violent suppression of an elven revolt in Halamshiral. After Celene leads the crackdown on the elves, the Divine does attempt to make a public speech in defense of the mages, but is cut short by Jeannot's assassination attempt.

This section contains spoilers for:
Dragon Age: The Last Court.

The Divine travels to the remote marquisate of Serault, visiting upon the court of the Marquis of Serault, expressing curiosity on whether Serault has relieved the Shame left by the current Marquis' great-grandfather. Her visit motivates various activities and challenges in the game as the Marquis makes ready to receive her.

If Serault displeases the Divine:
Justinia will leave the Marquis' reception and Serault's Shame will continue. Possible reasons include receiving The Horned Knight's "gift" and the Marquis of Serault dismissing her outrage if the Sealed Chantry was broken into. If Serault's Prosperity, Dignity, or Freedom become too dismal, she will cancel her visit to the marquisate entirely.

If Justinia is pleased at the reception:
She declares that Serault is free of her Shame at the end of the reception. She may present additional rewards throughout if she is pleased enough; in order, the keys to The Sealed Chantry, the return of the Glass-Antlered Mask of Serault, and a lucrative commission to replace all the windows in the Grand Cathedral.

Justinia calls a peace conclave between the warring mages and templars, to be held at the Temple of the Sacred Ashes. Prior to the formal inception of the conclave, the temple is destroyed in the blast that creates the Breach and Justinia is killed.

Acting on orders given by Justinia prior to her death, Cassandra and Leliana officially form a new Inquisition. According to Leliana, Justinia intended to personally restore the Inquisition if the conclave concluded without peace being reached. She hoped that with enough support, it could challenge established tenets of the Chantry and revolutionize the treatment of mages.[5]

Following the entry of the Inquisitor into the Fade, they are greeted by a spirit taking the form of - and claiming to be - Divine Justinia. The spirit acts as a guide through the Fade and aids the Inquisitor in recovering their memories, after which they are able to recall that Justinia was kidnapped by Grey Warden mages at the conclave. Corypheus intended to use Justinia as a sacrifice to accrue arcane power, but by chance his ritual was interrupted by the Inquisitor, who seized Corypheus' orb after Justinia knocked it from his grasp, thus opening the Breach and hurtling the Inquisitor and the Divine into the Fade.

Justinia helped the Inquisitor escape demons and the two attempted to flee through a rift, thus making it apparent that Justinia, not Andraste, was the mysterious woman seen by soldiers as the Breach opened. As the demons neared ever closer, Justinia sacrificed her life to them in order to buy time for the Inquisitor's escape.

As the Inquisitor neared their escape from the Fade for the second time, the spirit claiming to be Justinia once again sacrifices itself to weaken the Nightmare demon, but not before asking the Inquisitor to relay a message to Leliana: "I'm sorry. I failed you, too." 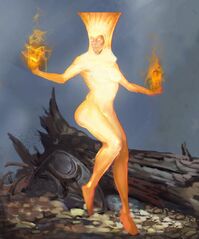 Artwork of Spirit of Justinia in Heroes of Dragon Age