“What else am I, if not a seeker of justice?”

Justice is a benevolent spirit of the Fade who embodies the concept of justice. Though an involuntary guest in the mortal world, his actions have made lasting repercussions on the world of Thedas. In Dragon Age: Origins – Awakening, Justice is a companion of the Warden-Commander.

"Justice" is not a name, it is an identity. Not all the denizens of the Fade identify with darker emotions like rage and pride. Some embody the nobler qualities found in humanity: faith, hope, compassion, valor, and justice.

Although spirits have no definite shape in the Fade, Justice takes the form of an armoured figure and chooses in place of a name, the virtue to which it aspires; Justice.

After the battle, Justice is unsure what to do next and asks the Warden-Commander to advise him. The Commander can advise Justice to continue Kristoff's mission as a Grey Warden. After recalling from Kristoff's memories that Kristoff was killed by the First and that the First's darkspawn masters who commanded the task still lives, Justice has come to the conclusion that avenging Kristoff's death would be a worthy goal. Justice will then join the party. Alternatively, the Commander can refuse to advise Justice, in which case Justice will leave the Warden-Commander's company to figure out what to do with himself.

When returning to Vigil's Keep, Kristoff's wife, Aura, recognizes Justice as her husband, and realises he is dead. Disgusted by what was done to his body, she runs away. Justice realizes that, intentional or otherwise, Justice has done Aura a great injustice and asks for the Warden-Commander's aid in gaining Justice for Kristoff and making amends with Aura.

Unlike the other companions, Justice does not undergo the Joining as its host is already a Warden.

Regardless of how the Amaranthine Conflict ended, Anders was eventually recruited into the Wardens and Justice became trapped in Kristoff's corpse. Justice urged Anders to fight for the freedom of mages more actively. Anders agreed to become Justice's human host to help his friend, but afterwards Anders's suppressed anger warped Justice into a demon[1] of Vengeance. Several Templars and Wardens attempted to kill Anders/Justice but are slain in the confrontation leading Anders to flee to the relative safety of Kirkwall in the Free Marches.

Justice tends to take over whenever Anders becomes angry at the injustices done to mages and can be difficult for Anders to control. After their merging while in the Fade Justice is the dominant controlling force.

Justice's attitude towards Hawke is dependent on whether Anders is Hawke's friend or rival. On the friendship path, Justice comes to believe that Hawke is a supporter of it and Anders's campaign for mages' freedom and forms a respect for them. On the rivalry path, however, Vengeance slowly begins to resent Hawke, seeing them as having given in to sloth and willing to stand by as mages are tortured and killed. This simmering resentment explodes when Anders is nearly convinced by Hawke to give up his plan when Vengeance seizes control, demanding that Hawke leave and declaring that Anders has no need of them.

If Hawke romances Anders, regardless of which path they are on with him, Justice disapproves of Anders's growing affection for Hawke, seeing it as a distraction from his commitment to freeing the mages; according to Anders, this is one of a small number of things they disagree on.

Friendship and rivalry also affects Justice personally. If on the friendship path with Anders, the mage eventually claims that he and Justice have merged fully and that destroying the Chantry was a decision made by the two of them. However, on the rivalry path Justice apparently becomes a true demon and as Vengeance often takes over Ander's body, apparently forcing him to blow up the Chantry.

If Anders is brought along to aid Feynriel with his Night Terrors, Justice takes control and expresses surprise at returning to the dreamworld in this manner, but concedes it feels good to breathe the air of the Fade again.

If Hawke listens to or attempts to make a deal with the sloth demon Torpor, Justice will object increasingly before turning hostile, resulting in Anders's death in the Fade. Neither is actually killed, however. If Hawke does not follow through on the deal and asks Anders why Justice couldn't have simply played along with it, Anders admits that a benign spirit is incapable of lying to maintain a ruse, and Justice is no exception.

If Hawke chooses to kill Anders, it is currently unknown what happens to Justice. However, according to Solas, when a spirit dies its energy returns to the Fade and may regenerate into another spirit. If the idea giving the spirit form is strong, or if its memory has shaped other spirits, it may someday rise again. It could also rise again with a different personality with no memory of its past.

Justice likes tokens that remind it of the Fade as well as items that provide insight into Kristoff's life.

As you befriend Justice and gain its approval, it will gain the following additional skills:

Below are the spots where you can initiate dialogue with Justice. On PC, it can be hard to find the correct spot to click; make sure to hit "tab" and rotate the camera if it's not letting you click on it.

Codex entry: A Letter from Aura

In order to not get the +100 approval bug with any of the characters, you need to do the "blight orphans" quests or "chantry board" quests, that give (dis)approval to a character, only after you recruit that character. For example, if you do the "From the living wood" quest that normally gives -1 approval to Velanna before actually recruiting her, that will get you the +100 approval bug with Velanna. Same goes for the quests for the "blight orphans". If you do quests that give (dis)approval to Justice or Sigrun before recruiting them, that will lead to the bug with them. (Tested on PC) 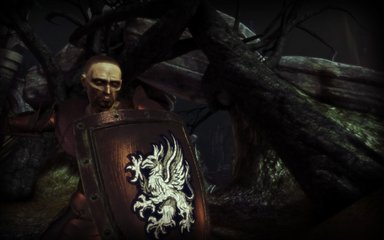 Tier progression of Justice in Heroes of Dragon Age