“You don't care for the mages, you just bow to the Chantry's every whim!”

Jowan is an apprentice mage in the Circle Tower, where he had lived ever since his father left him at the village chantry at the age of five or six. His mother thought of him as an abomination. He is a friend of the Magi Warden and a temporary companion during the Magi Origin.

Jowan has been having a forbidden affair with an initiate, Lily. To further compound his problems, he is suspected of dabbling in Blood Magic, a crime that is punishable by death. Lily has also found proof that Jowan is to be made Tranquil. In the Magi Origin quest Bound in Blood and Magic, he asks the Warden to help him find and destroy his phylactery so that he may flee with Lily without having to fear capture by the Templars. Whether or not the Warden chooses to reveal Jowan's plan to First Enchanter Irving, Greagoir and Irving will be found waiting for Jowan once the task is completed. When Greagoir sentences Jowan to death and Lily to Aeonar, Jowan will use Blood Magic in order to protect her. Yet once he reveals he really is a blood mage, Lily will reject him forcing him to escape alone.

Irving later says that Jowan's troubles came from unmet expectations, that he was disappointed in himself and believed the First Enchanter to be as well. Irving says that he wasn't, and that there would have been no cause to make him Tranquil if he hadn't turned to blood magic. During the Magi Origin however, Irving never contradicted that Jowan was going to be made Tranquil; only that the plans to make Jowan Tranquil—whether true or not—was leaked to Lily so that she would be connected to Jowan's scandal when he inevitably attempts to destroy his phylactery and flee the Circle. Irving justified his ploy by stating that Lily is just as guilty as Jowan, and if he is destined to suffer, then Lily should as well. Furthermore, by connecting Lily to this scandal, Irving hopes to use this incident to remind the Chantry that they are not above reproach.

Jowan claims he originally turned to blood magic because he could never match up to his more competent mage friend and he thought blood magic would give him the power and control to be a better mage. The practice always felt wrong to him though, and once he met Lily, he thought he could leave blood magic behind him. When he was told he was planned to be made tranquil however, Jowan continued to dabble in blood magic because it seemed the only way he and Lily could escape and also the only way he could avoid being made tranquil.[1] Jowan thought once he and Lily were free of the Circle, he would give up all magic. Many believe that Jowan was one of those Uldred introduced to blood magic and later betrayed to further his own advancement.[2]

Jowan was eventually cornered near Redcliffe Village by Knight-Lieutenant Irminric Eremon but Teyrn Loghain's men took Jowan into their custody while Irminric was imprisoned in the dungeon of the Arl of Denerim's Estate.[3]

Jowan can be found later imprisoned in the Redcliffe Castle - Basement during the Arl of Redcliffe quest. He was employed by Arlessa Isolde to tutor magic to her son in secret without him being taken to the tower, which led Valena to believe Jowan was having an affair with Isolde. However at the same time Jowan was working for Loghain Mac Tir with the task of poisoning Arl Eamon, which he eventually achieved. Jowan says he was recruited by an agent of Loghain;[4] that he was told Arl Eamon was a threat to Ferelden and if he helped poison him, then Loghain would help settle matters with the Circle of Magi on Jowan's behalf—possibly even help him return to the Circle Tower.

However he was suspected by the arlessa of being behind the worse disturbances that followed (i.e., the multitude of undead corpses hunting the living), which were in fact caused by a demon possessing Connor. Arlessa Isolde—thinking that Jowan summoned a demon to torment her family and destroy Redcliffe—demanded that Jowan put an end to the undead attacks. She and her men apprehended Jowan and had him tortured in an effort to coerce him to end the demonic hostilities. However, since Jowan was not the source of the trouble, there was nothing Jowan could say or do that would appease her. Eventually, they gave up on coercing Jowan and left him imprisoned in the Redcliffe Dungeons.

Jowan seems remorseful for the damage he caused and wishes to make amends if he is allowed. The Warden can choose to kill him, free him or leave him in the dungeon.

Note: If you intend to execute Jowan, you must not complete the Urn of Sacred Ashes prior to the Arl of Redcliffe. If the Urn has already been discovered, then the cutscene where Teagan grants the Warden permission to execute Jowan will be immediately followed by Eamon's healing and his own judgment of Jowan. In this case, the Warden never has the opportunity to visit the dungeon and carry out the execution.

During the Magi Origin

During the Arl of Redcliffe quest

During the Magi Origin

During the Arl of Redcliffe quest

During the final stages of the Mage Origin storyline, you don't have to worry about future statistic/skill allocation with Jowan but be sure to make the most of what you're provided with. The player should be able to equip Jowan with a staff and potentially a Charm of Flame (that adds 5% Fire Damage, assuming the player is not a primal mage and is using it themselves). Take advantage of Jowan's Flaming Weapons spell, as the player will also be accompanied by Lily (who has Dual-Weapon Training). Be careful, however, Flame Blast causes friendly fire.

When he is encountered again during the Arl of Redcliffe quest line, his skills will have advanced considerably (but he will only be accessible as a temporary companion if chosen to enter the Fade to face off against the Desire Demon).

During the quest the Arl of Redcliffe, Jowan's level will match that of the Warden (which typically is at level 14 by this point). 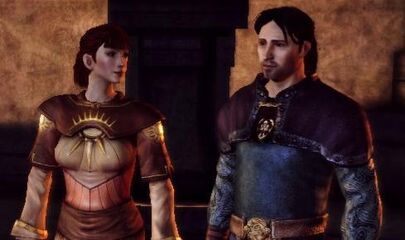 Jowan and Lily ask for help during the Mage Origin 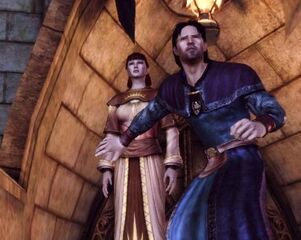 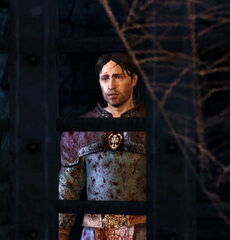 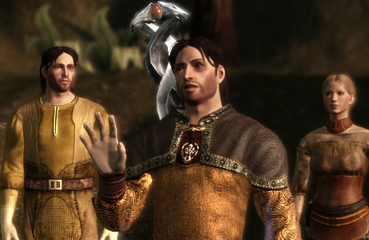 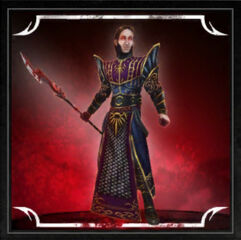 Tier progression of Jowan in Heroes of Dragon Age