Edit
watch 01:54
Arcane: League of Legends - The Loop
Do you like this video?
Play Sound
“Being a Grey Warden is not a cure. It is a calling.”

Jean-Marc Stroud was born the younger son of a minor noble family in the Fields of Ghislain. He received word that his family had been killed shortly after completing his training at the Academie des Chevaliers. Although the culprits were made out to be bandits, Stroud's family were actually the victims of the Grand Game. Before Stroud could seek revenge against his family's murderers, his trainers at the Academie urged a Grey Warden, one Clarel de Chanson, to recruit him to stop him from throwing his life away. Unable to refuse Clarel's request honorably, Stroud joined the Wardens.

In the following decades, Warden Stroud served with honor and earned a reputation as the finest swordsman in the order. He has been tasked with recruiting and training new Wardens, and many young Wardens attribute their skill to Stroud's training. Due to his family history, Stroud limits his travels to the Free Marches to avoid being caught up in the Game and thereby spare the Wardens from accusations of interfering in Orlesian politics. Stroud lacks strong opinions on the mages and templars, but believes both groups were wrong to abandon the Chantry.[1]

Anders negotiates with Stroud, who agrees to take Hawke's sibling to join the Grey Wardens, saying that Anders and he are even. Bethany or Carver then leaves the party with Stroud.

If Alistair did not remain with the Grey Wardens:
Stroud encounters Hawke (possibly for the second time) during the First Battle of Kirkwall. In Lowtown Hawke stumbles upon Stroud, along with two other Wardens (and possibly Bethany or Carver) fighting a group of Qunari. After the battle, Stroud announces that he cannot stay to help because he must return to his mission, and that Grey Wardens cannot get involved in political struggles regardless. Stroud gives Hawke the Warden's Promise ring before leaving.

If either Loghain or Alistair is dead or if Alistair left the Wardens:
Hawke contacted Stroud to help them investigate Red Lyrium. Stroud however was concerned about corruption in the Grey Warden ranks and went into hiding. Hawke and the Inquisitor rendezvoused with Stroud in a smuggler's cave in Crestwood to see what his investigation uncovered.

Stroud explains that he was investigating if Corypheus could have survived fatal wounds just like an Archdemon can. Yet in the middle of his investigation, every Grey Warden in Orlais began to hear the Calling which Stroud believes is being elicited by Corypheus. Believing that their end is near, Warden-Commander Clarel planned on using a blood magic ritual that would end all Blights before they all perished. Stroud was branded a traitor for protesting Clarel's plan and went into hiding. Stroud, Hawke, and the Inquisitor scouted the ancient Tevinter ritual tower in the Western Approach to investigate a Grey Warden congregation.

At the tower, the party witnessed Grey Warden mages sacrificing their fellow Wardens to summon demons. They are being led by Lord Livius Erimond, a Venatori Magister who convinced Clarel to use their blood magic techniques to raise a demon army to invade the Deep Roads and kill the Old Gods before they wake. The demon binding rituals Erimond taught the Grey Warden mages however has the side effect of enslaving them to Corypheus, who will use them to conquer Thedas. Erimond escapes to Adamant Fortress while the Inquisitor's party confronts the enslaved Wardens of the tower.

Hawke and Stroud joined the Inquisition as they lay siege to Adamant Fortress. They confront Erimond and Clarel about the truth of the demon binding ritual and attempted to sway the Wardens against Erimond. When Erimond summoned Corypheus' dragon to deal with the Inquisition, Clarel had a change of heart and betrayed Erimond. The dragon attacked and a massive battle ensued. After which, the Inquisition pursued Clarel. Clarel inflicted her wrath on Erimond but was killed by the dragon he had summoned. Clarel's last act was casting a spell that subdued the dragon but its crash caused the ground beneath them to crumble, resulting in the party to fall off the ramparts. The Inquisitor used their mark to open a rift to transport the party to the Fade.

The Inquisitor finds some kind of spirit that poses as Divine Justinia V who briefs the Inquisitor that they are in the realm of a Nightmare demon and that the Inquisitor must recover the memories it took from them. As the Inquisitor recovers these memories, they remember how the mortal Divine was bound by Grey Warden mages and sacrificed to power an orb- an orb which the Inquisitor picked up and gave them the mark, and how the spirit in the Divine's form was the one who led the Inquisitor out of the Fade after the creation of the Breach. Once Hawke realized that the Grey Wardens had a hand in sacrificing the Divine to further Corypheus' schemes, Hawke becomes incensed and accuses the Grey Wardens of being out of control and need to be checked. Stroud is defensive about the accusation, and argues that the Wardens were most likely mind controlled by Corypheus and that Hawke themselves have caused much chaos by causing the mage rebellion.

If Stroud survives the events of Here Lies the Abyss:
Stroud will take command of the surviving Grey Wardens. After deferring judgement of what the Grey Wardens should do next to the Inquisitor, he will travel to Weisshaupt to brief the Grey Wardens of what had transpired.

Demands of the Qun (conditional) 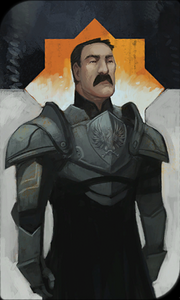 Tier progression for Stroud in Heroes of Dragon Age

Tier progression for Ser Stroud in Heroes of Dragon Age