The Jaws of Hakkon, also dubbed Hakkonites, are a cult of Avvar who have eschewed all other gods in favor of Hakkon Wintersbreath. They are an aggressive group unlike many other Avvar, and seek to conquer the Fereldan Lowlands.

The Jaws of Hakkon were first formed during the Divine Age in the midst of the Second Blight. The Avvar of the Frostback Basin resented the inaction of Ferelden and summoned their god, Hakkon Wintersbreath, binding Hakkon to a High dragon, intending to unleash him on the unsuspecting lowlands. According to Thane Svarah Sun-Hair, it was at this time that Hakkon was rendered unable to hear their prayers nor communicate with the Augurs of the Hold. All Hakkon was left able to do, was to kill. Hakkon then disappeared, along with the Hakkonites and was considered lost to the Avvar.

Unbeknownst to the Avvar, Inquisitor Ameridan had been sent by Emperor Kordillus Drakon I to ensure the safety of Orlais from destruction by Hakkon. Ameridan was unable to slay the dragon, but was able to seal both himself and it with time magic at the Old Temple in the Basin, remaining in stasis for eight hundred years.

The Jaws of Hakkon were eventually re-formed in the Dragon Age, in the aftermath of the Fifth Blight. Outraged at the Avvar gods for allowing his hold to be devastated by the Darkspawn and at the lowlanders for refusing to aid the Avvar, Gurd Harofsen foreswore all other Gods except the stolen Hakkon, molding his surviving kin into the Jaws of Hakkon and vowing to unleash Hakkon once more.

The re-established Hakkonites, utilizing their unique capacity for Ice magic, are finally able to pierce the barrier on the Tevinter ruin in the north-east Frostback Basin, allowing them access to the Old Temple at last. Discovering that Hakkon is still bound within the High dragon and frozen in stasis. The Hakkonites resolve to draw Hakkon into a new vessel and take revenge on the lowlands for refusing to aid them during the blight. The Hakkonites establish themselves in the Frostback Basin.

The Hakkonites broker a peace with the nearby Avvar settlement of Stone-Bear Hold, despite a mutual dislike between the two Avvar holds. This is in fact, only a ruse. The Hakkonites kidnap their fellow Avvar's sacred Hold-Beast Storvacker, intending to use it as a sacrifice for their ritual to free Hakkon Wintersbreath.

The Hakkonite leader, Gurd Harofsen, encounters the Inquisitor in person during a diplomatic meeting with Thane Svarah Sun-Hair of Stone-Bear Hold but Gurd refuses to attack them while on fellow Avvar's holdings.

The Inquisitor eventually activates all the magical trail markers, melting the magical ice barrier protecting the Old Temple where the Hakkonites are based. The bulk of the Inquisition forces establish themselves at Razikale's Reach, the site of the barrier generator and lure the bulk of the Hakkonites there in the hopes of re-activating the barrier. Meanwhile, the Stone-Bear Avvar and the Inquisitor's party personally launch a raid on the temple, opening the gate and storming the temple after a brutal battle with the remaining Hakkonite forces.

Left without a suitable host, Gurd Harofsen attempts to bind Hakkon using himself as a vessel instead. Gurd is only able to partially complete the ritual before the Inquisitor's party breaches the inner sanctum, infusing Gurd with part of Hakkon's essence and transforming him into a monstrous revenant infused with Hakkon's power. After a vicious battle, Gurd is slain and the hakkonites are defeated, however the ritual has disrupted the bindings keeping Hakkon frozen, returning the Avvar god to his High Dragon host, who promptly unleashes himself on the Basin. Hakkon's host is eventually slain by the Inquisitor after a grueling conflict atop the now frozen CloudCap lake, allowing Hakkon to be freed and reborn at last.

With Gurd dead, their headquarters taken and their God beyond their reach, the remaining Jaws of Hakkon are broken for a second time. 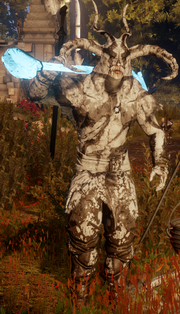 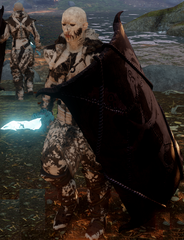 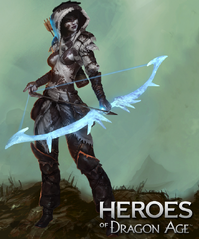 A Hakkonite Archer in Heroes of Dragon Age
Add a photo to this gallery
Retrieved from "https://dragonage.fandom.com/wiki/Jaws_of_Hakkon_(faction)?oldid=891460"
Community content is available under CC-BY-SA unless otherwise noted.