watch 03:03
The Loop (Games)
Do you like this video?
“We were after a dwarven weapon, trying to make sure it stayed in dwarven hands!”

Iwan is a surface dwarf who, wishing to follow in Hawke's footsteps, ventured into the Deep Roads with his brothers in search for treasure.

Iwan is Yevhen's middle son and works as a merchant. The boldest of the three brothers, he is also the most unscrupulous. He and his brothers were raised by an elven woman named Dera.

Iwan is involved in the quest Fool's Gold.

Yevhen, who has ties with the Dwarven Merchants' Guild, desperately asks Hawke to retrieve his three sons who have gone down into the Deep Roads, by themselves, in search of treasure. Once down there, Hawke finds Yevhen's oldest son, Emrys, sitting in front of a locked door. He explains that his younger brother, Iwan, locked the youngest brother, Merin, in a room full of darkspawn before scampering off to find the treasure. Hawke then tells Emrys to go back to his father and must now choose which brother to save. If Hawke goes around the locked door and goes to the room Merin is locked in, Hawke and company must help him fight off a small troop of darkspawn. This act will save Merin who will then go back to his father. However, doing this will result in Iwan's death.

Alternatively, Hawke can bypass Merin's tomb and run straight to Iwan. Helping Iwan fight off his darkspawn will result in Merin's death. Hawke can then lie to Yevhen or tell him what Iwan really did, in which case Iwan is cast out of his family. 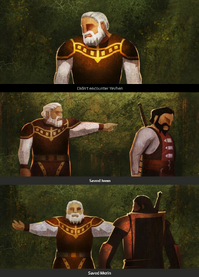 The quest choices in Dragon Age Keep
Add a photo to this gallery
Retrieved from "https://dragonage.fandom.com/wiki/Iwan?oldid=880885"
Community content is available under CC-BY-SA unless otherwise noted.