It Remains to be Seen

It Remains to be Seen is a side quest from the Jaws of Hakkon DLC for Dragon Age: Inquisition.

The Jaws of Hakkon have used human bones in some sort of magic ritual. Learning more about this magic could offer insight into their intent.

Automatically obtained upon finding an artifact in the Swamp Kuldsdotten area located in the middle of Frostback Basin.

Collect five enchanted skulls scattered around the swamp. Head to the Stone-Bear Hold to speak to The Augur about the skulls. He will offer to tell you more about the magic that Jaws of Hakkon are using, but requests that you first familiarize yourself with Avvar magic by examining the veilfire runes in the hold.

Light the veilfire in the Augur's hut and head to the northern part of the hold, where Gyda Myrdotten prepares the bodies. There are three veilfire runes which reveal more information about an Avvar ritual, unlocking respective codex entries. Return to the Augur to discuss what you've seen. 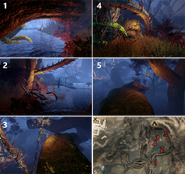 Each artifact and its location on the map
Add a photo to this gallery
Retrieved from "https://dragonage.fandom.com/wiki/It_Remains_to_be_Seen?oldid=867764"
Community content is available under CC-BY-SA unless otherwise noted.