“None of us knew this would be the result when we started down this road, but our lack of intention changes nothing.”

Isseya was an elven mage Grey Warden who lived during the Exalted Age.

Born in an alienage, Isseya joined the Grey Wardens with her elder brother Garahel during the Fourth Blight. After successfully completing her Joining, she was chosen as a griffon rider. Her griffon was named Revas. Isseya lacked her brother's charisma and preferred to shun the fame he sought. Isseya had longish brown-blond or ash-blond hair. She was described as being a much plainer female version of her brother, never being considered beautiful.

Not long after Isseya and Garahel joined the Grey Wardens, the Archdemon Andoral awoke, beginning the Fourth Blight and Isseya was rushed into front line service with only a portion of the training Griffon riders usually undergo. Isseya went immediately to the besieged capital of Antiva; Antiva City. It was here that Isseya first bonded with her griffon, Revas. When the Grey Wardens discover that the Antivan Royal Guard has rebelled and is attempting to kill the Royal Court, Isseya joins her fellow Wardens in their counterattack against the Guard. Afterwards Isseya assists with the evacuation of the surviving court members where she is assigned to evacuate Amadis Vael, Princess-Captain of the Ruby Drakes Mercenary company. As they retreat however, the Archdemon attacks the Wardens as they attempt to flee to Wycome in the Free Marches. Isseya does not join her fellow surviving Wardens instead joining Garahel in their effort to delay the Archdemon long enough to allow the others the opportunity to escape.[1]

Thanks to Garahel's passenger, an Antivan Crow Mage named Calien, Isseya and the others manage to reach Wycome unscathed. Although she protests when Warden-Commander Senaste insists that they cannot defend Wycome, Isseya concedes she is correct. While speaking with Garahel and Amadis, Isseya remembers tales of how the Dalish used magic to float their Aravels to traverse through forests. Isseya persuades the Warden-Commander to let her begin construction of a train of improvised aravels held aloft by magic and pulled by the Wardens' griffons. With Isseya and Calien lifting the transports, the Wardens manage to evacuate a large number of refugees to Starkhaven.[2]

Isseya and Garahel are both subsequently reassigned to the Anderfels, bringing Calien and Amadis with them. Over the years Isseya comes to realize Calien is actually a Blood Mage. Isseya persuades Calien to use his blood magic to control the mind of a Genlock and order it to retreat via the Deep Roads to enable the Wardens to locate which passage the Darkspawn are using to send troops to assault Hossberg. Convinced of its utility against the blight, Isseya persuades Calien to teach her blood magic. Isseya leads a team of Wardens out and collapses the tunnel, cutting off the darkspawn re-enforcements, however in the course of the battle one of the Griffons, Shrike, is infected with the darkspawn taint. In an attempt to save the Griffon's life, Isseya develops a way to put griffons through the Joining with the use of blood magic to force them to accept the taint rather than mindlessly rage about. These griffons were not only immune to the Taint, but were ten times stronger than normal griffons and could ignore even grave injuries. However they also become uncontrollably aggressive in the presence of darkspawn, requiring a Mage to use blood magic to force them to co-operate.[3]

As Garahel leads a force out from the northwest of Hossberg, Isseya takes command of the southern front to secure the lattenfluss river fork. The darkspawn are successfully routed but Shrike becomes ferocious and uncontrollable during the battle, flying off on his own and massacring a large swathe of darkspawn. Repulsed by the side effects of her ritual on the griffon, Isseya resolves never to let it be repeated again. With the siege broken, Isseya is re-assigned to Fortress Haine to rebuild the structure so it is capable of housing a large number of Free Marcher refugees.[4]

To her own surprise Isseya found herself enjoying the challenge of restoring Fortress Haine. As The Retreat was carved out into the mountain, Isseya realized that a water supply would be needed for the refugees. To that end, Isseya decides to ride Revas to the mountain peak and use magic to dislodge huge chunks of snow to fall into the cavern below, creating an artificial lake. Upon returning to Fortress Haine, Isseya is confronted by Garahel, who tells her she is to head up the evacuation of Kirkwall with her contingent of griffons using the improvised aravel plan they previously used in Wycome. Isseya protests that she has nowhere near enough troops to guard the caravan in order to evacuate such a huge quantity of people to which Garahel replies that she will have enough soldiers, if she puts the remaining Griffons at Fortress Haine through the modified joining. Isseya refuses, but Garahel informs her this is a direct order from the First Warden himself. Isseya eventually complies with her order but refuses to put Revas or her fellow Warden's griffon through the ritual. The refugees from Kirkwall are successfully evacuated at the cost of many of the tainted griffons and several Grey Wardens' lives.[5]

By 5:24 Exalted, the advancing corruption of the darkspawn taint within her begins to leave Isseya more resembling a Ghoul than a Warden. After a battle at Starkhaven, her hair begins to fall out and Isseya takes to wrapping her face in scarves and wearing a hood. Finally, Garahel formulates a plan to lure the Archdemon out from Antiva and attack it outside the city of Ayesleigh. To aid this, Isseya puts most of the Griffons in their strike force, particularly those beginning to age or slow, through the modified joining to increase their capability in combat. The next day, Isseya joins her brother and the other Griffon riders in their attack. After a grueling battle which leaves only 3 of the original 50 griffon riders alive, the Archdemon is finally brought crashing down into Ayesleigh, injured but alive. Garahel, volunteers to take the blow, asking his sister to be kinder to herself before he strikes down the archdemon at the cost of his own life.[6]

After attending Garahel's funeral outside Starkhaven, Isseya is recalled to Weisshaupt fortress for her expertise with griffons as lately many griffons have started dying due to an unknown sickness. While examining the griffons, Isseya realizes that it was her Joining ritual that caused the sickness, not only infecting and killing the joined griffons but all of them.[7]

Fearing that she has sentenced the griffons to extinction, Isseya begins traveling all over Thedas searching for information that could lead to a cure. Finally Isseya resolves to visit Calien in Antiva as the only blood mage she knows of with sufficient experience to aid her in reversing the condition. Calien refuses to aid her however, stating he has abandoned blood magic. Calien advises Isseya to look to herself for solutions, noting she has accomplished the allegedly impossible before.[8]

Isseya realizes that there is no way to save the living Griffons but realizes there may be a way to protect a future generation of them. Isseya travels to Starkhaven and convinces Amadis Vael to give her the clutch of eggs her Griffon has bore so she may purify them of the taint. Amadis eventually relents but not before informing Isseya that it was the blight which was the cause of the tragedy which befell the griffons.[8]

After peacefully ending the life of Amadis' griffon, Isseya purifies her clutch of Eggs by taking the taint into herself through prodigious use of blood magic. Convinced that the current generation of Wardens have failed the griffons and to ensure there is no chance the hatch-lings are exposed to the taint, Isseya conceals the eggs in a form of arcane suspended animation in a Drake cave in the Anderfels. She then leaves a series of clues hidden in various records at Weisshaupt which only an elven mage would be able to decipher, to ensure that anyone who would awaken the Griffons would understand the precious cost of freedom. Her duties complete, Isseya departs on her griffon for one last flight before her Calling.[9] 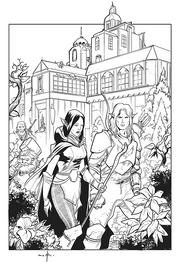 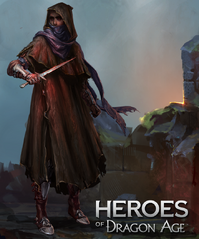 Artwork of Isseya from Heroes of Dragon Age

Artwork of Isseya's tier progression in Heroes of Dragon Age