watch 02:39
The Loop (Games)
Do you like this video?
“For the one who delivers the Sacred Ashes of Our Lady will have the esteem of Redcliffe, and all the riches it is in my power to grant.”

Isolde is the wife of the renowned Arl Eamon Guerrin of Castle Redcliffe and the mother of their young son, Connor.

Isolde originally hailed from Orlais but moved to Redcliffe in Ferelden when her father was assigned there as its new governor. Isolde's family didn't take to their new home and task very happily, aware that the nine previous Orlesian Arls of Redcliffe had been assassinated by the Banns - or beheaded by Emperor Reville; for failure, most likely.

Isolde met Eamon Guerrin - the rightful heir to the lands of Redcliffe controlled by her father - and became smitten with him because he was part of the resistance, even though it was her own family he opposed. Though her infatuation proved one-sided at the time, Isolde kept helping the resistance by passing on information. When the Orlesians were eventually driven out, Isolde elected to stay in Denerim with a cousin who'd married a Fereldan.

Six years after reclaiming his lands and title, Eamon once again crossed paths with Isolde on a trip to Denerim. The two started a relationship, and she returned with him to Redcliffe, where the two married. Their union was rather controversial, as some people believed Isolde to be an Orlesian spy. Long-buried gossip claiming Alistair to be Eamon's bastard son resurfaced, and Isolde became fixated on the idea of her husband's "proper Fereldan son". Eamon eventually sent Alistair to a monastery to spare his wife's feelings. Connor was born on an exceptionally warm afternoon and had the immediate affection of his father.[1]

Unbeknownst to Eamon, Isolde has magic in her family, and this trait has been inherited by her son. In an attempt to keep Connor by her side (as he would be disinherited and sent to the Circle if his talents were discovered), she hires Jowan, an apostate mage, to teach her son, in secret, just enough to hide his abilities. One of Isolde's maids, Valena, believed Isolde was having an affair with Jowan, not being aware of Connor's magic.

However, due to his lack of training, Connor becomes possessed by a Desire Demon while trying to find a cure for his father, who has been poisoned by Jowan under Teryn Loghain Mac Tir's orders. During the Arl of Redcliffe quest, Isolde is willing to do anything to save her son, and when a Blood Magic ritual is suggested as a means of entering the Fade and killing the Desire Demon there, she offers to sacrifice her own life to save his. If the Warden chooses to kill Connor to defeat the demon, Isolde will plead for another solution, but will ultimately offer to make the killing blow as she wants to be there to comfort Connor in his final moments.

Isolde and Connor can both survive if the Warden acquires the aid of the Circle of Magi to enter the Fade.

If Isolde survived:
Isolde was invited as a guest of Duke Prosper to Chateau Haine. She dislikes Dulci de Launcet and will interrupt Hawke's conversation with Teagan Guerrin to complain about her.

If both Arlessa Isolde and Connor are saved with the aid of the Circle of Magi, the codex may state that either one, or both of them, died during the events at Redcliffe Castle, even though both continue to appear in the game.

If this happens it is possible that during Dragon Age Inquisition villagers of Redcliffe will state that either Isolde or Connor died during the events of Origins.

If Isolde is sacrificed to save Connor, it is possible for the codex to state that both she and Connor survived after the Warden enlisted the aid of the Circle. 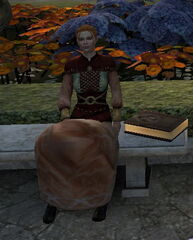 Retrieved from "https://dragonage.fandom.com/wiki/Isolde?oldid=887975"
Community content is available under CC-BY-SA unless otherwise noted.