watch 02:45
Wiki Targeted (Games)
Do you like this video?
Play Sound
“Also, it's 'THE Iron Bull.' I like having an article at the front. It makes it sound like I'm not even a person, just a mindless weapon, an implement of destruction... That really works for me.”

The Captain of the Chargers
Demands of the Qun
Tough Love

The Iron Bull is a one-eyed Qunari mercenary, companion and a pansexual[2] romance option for the Inquisitor in Dragon Age: Inquisition.

Before he became known as the Iron Bull, he worked as an agent of the Ben-Hassrath on the Qunari-held island of Seheron. According to him, the island was "a sack of cats". Incursions from Tevinter, marauding Tal-Vashoth, and native rebels fighting both sides made life chaotic. He took down plenty of spies, rebels and deserters, but burned out by 9:40 Dragon. The Ben-Hassrath reassigned him to Orlais, ostensibly as a Tal-Vashoth, to work undercover, where he founded the Bull's Chargers mercenary company. Bull uses his mercenaries to gather information on Orlesian nobles, feeding the intelligence to the Ben-Hassrath.[3] Though he still reports to his old masters, time in Orlais led to something of an identity crisis for him.[4]

He remains in command of the Bull's Chargers, though spends much of his time drinking, lazing about and overindulging - all clear violations of the Qun. Despite his unusually friendly demeanor and lax attitude to his philosophy, Iron Bull still has a loyalty to the Qun which dies hard. He doesn't proselytize, but neither does he apologize for his way of life.[3]

Just as The Iron Bull and his troops emerge victorious from a skirmish with the Venatori, The Breach occurs. Spotting the disturbance, Bull sets off to investigate.[5]

Like most of the companions it is only optional to hire The Iron Bull (and the Chargers) on at this point. Should the Inquisitor decide to hire him on, he can be found outside of Haven by the stables, and later in the main courtyard in Skyhold near Cassandra, before he eventually winds up in the tavern.

Bull later informs the Inquisitor that the Ben-Hassrath recognize the threat Corypheus and his Venatori pose and willing to offer an alliance. To that end, they set up a joint effort to attack a Venatori red lyrium smuggling operation on the Storm Coast. Upon arrival, the party meets with Bull's contact, Gatt, a former elven slave whom Bull recruited on Seheron, who details the plan for a Qunari dreadnaught to ambush the smuggling vessel before it reaches open waters. In the meantime, the Inquisitor, Bull and the Chargers would separately takes two hills where the Venatori are stationed so their mages can't sink the dreadnaught. Bull assigns the Chargers what he believed to be "the easy job", but a large Venatori force began advancing on their position. Gatt insisted that the Chargers hold the hill, otherwise the dreadnaught would be destroyed. If Bull is persuaded to call retreat and thus sacrifice the Qunari dreadnought for the lives of the Chargers, he is cast out and becomes Tal-Vashoth. If Bull is persuaded to sacrifice the Chargers, he is deeply affected by their loss and later collects their remains to give a Qunari rite.

Iron Bull returns during the events of the 'Trespasser' DLC, at the Exalted Council set two years after Corypheus' defeat.

If the Chargers survived:
The Iron Bull is enjoying drinks with his company at the tavern. The Chargers want to surprise him with a dragon skull as a birthday present. The Inquisitor can help them in this by occupying Bull with dialogue (requires the four 'Knowledge' Inquisition perks), or give up the charade to which Bull reveals he heard them dragging the skull all along.

If brought to the final confrontation at the Darvaarad, the Viddasala will plead with Bull to rejoin them and orders him to kill the Inquisitor. However Bull will refuse, adamantly stating "Not a chance, ma'am," and remains loyal to the Inquisition and his companions.

At the end of the events of the DLC, he and the Chargers return to taking jobs across Orlais and Ferelden, doing their part to maintain the order that the Inquisition fought for.

If the Chargers were sacrificed:
Bull has fully re-committed to the Ben-Hassrath once again and operates, unbeknownst to the Inquisitor, as a spy for the Viddasala. If he is brought to the final confrontation at the Darvaarad, the Viddasala orders him to kill the Inquisitor, which he follows without question, betraying the party and declaring, "No hard feelings, bas." If he was not brought, he will appear through a side door and join the Ben-Hassrath during the fight, saying it was smart of the Inquisitor not to bring him. Neither romance nor high approval will prevent his betrayal, and Cole will even note that his heart held no regrets over the decision. He is slain by his former companions, and during the final talk with Solas, he will remark upon his betrayal as evidence of the Inquisition's eventual fate.

Iron Bull's approval can most easily be gained by taking him along on battles. Fighting groups of Venatori enemies will grant slight approval, so keeping him in your party in areas heavy with Venatori will earn you a fair amount of approval quickly. After killing a High dragon, a cutscene will occur after you return to Skyhold where the Inquisitor has a few drinks with Iron Bull in celebration—approval can be gained there by agreeing with him about dragons and drinking when he prompts you to. Furthermore, killing High Dragons with him in the active party gains great approval.

Iron Bull generally approves of the Inquisition's actions, so many choices you make won't have a big effect on his approval. However, there are a few major choices that he will greatly approve of. These include:

Iron Bull is a pansexual romance option for both male and female Inquisitors.

Unlike many of the game's romance options, the Inquisitor's relationship with Bull begins as a physical one instead of a romantic one. After having flirted with Bull enough and having completed his personal quest involving the possible Qunari alliance, speaking to him will trigger a cut scene where the Inquisitor walks into their quarters to find the Bull sitting on their bed. He then tells the Inquisitor that he "got the hints" and knows the Inquisitor wants to "ride the Bull". If the Inquisitor admits this and does not reject him, Bull will proceed with a sexual encounter. The next time the Inquisitor speaks to Bull on the topic of their relationship they can either choose not to pursue further romance with Bull or agree to Bull's ground rules for something similar to a friends-with-benefits arrangement.

In a dialogue option where you ask Bull how "serious" your relationship is, he says that it’s up to you and that he’s fine keeping things casual and light if that’s what the Inquisitor wants. When asked how Qunari show they’re serious about a relationship, Bull explains that Qunari don’t have sex for love but that to show their commitment to an individual they craft matching necklaces out of a dragon’s tooth broken in half, each party wearing half the tooth. “Then, no matter how far apart life takes them, they’re always together.” You’re given a requisition for the necklace, called the “Necklace of Kadan”, and once you have it you can give it to Bull. Before Bull will let you give him the necklace, he will initiate another sexual encounter. After you're finished (but before Bull has dressed), Cullen, Josephine and Cassandra will walk in on you. At that point you can either denounce your relationship with Bull (calling it “just a fling” to save face and ending the relationship), or you can tell the three that you intend to continue relations with Bull. If the latter is chosen your advisors leave you be and you can give the necklace to Bull – in exchange, he calls you “Kadan” (Qunlat: "my heart") From then on, he addresses you primarily as Kadan in conversation. 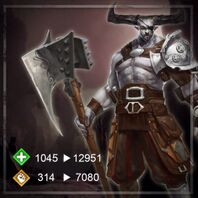 Artwork of Iron Bull in Heroes of Dragon Age 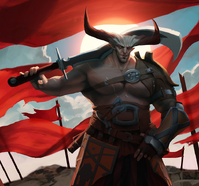 Promotional artwork of The Iron Bull 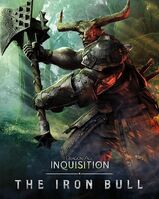 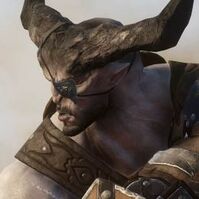 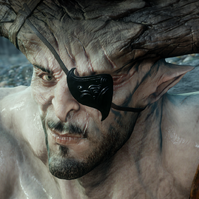 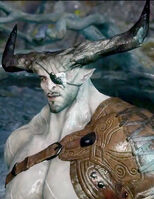 Iron Bull in the Fires Above trailer 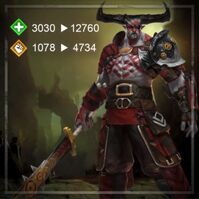 Retrieved from "https://dragonage.fandom.com/wiki/Iron_Bull?oldid=751137"
Community content is available under CC-BY-SA unless otherwise noted.