Revision as of 11:05, 29 March 2020 by Ablake (talk | contribs) (Capitalized all instances of "inferno golem" on the page for consistency. It's the name of a boss, not like the generic "steel golem".)
(diff) ← Older revision | Latest revision (diff) | Newer revision → (diff)
Edit
watch 02:36
Wiki Targeted (Games)
Do you like this video?
Play Sound

The Inferno Golem is a heavily armored and heavily modified steel golem, that was designed by Paragon Hirol. This golem is at least four times the size of a normal steel golem and is covered in liquid hot magma. It can easily rip a person in half.

Inferno Golem Shell, which is used for making the Golem Shell Armor for the quest Golem's Might.

This is likely the hardest boss encounter in Awakening, with the exception of the Mother. The inferno golem hits very hard, has several area of effect abilities, and is accompanied by the Lost, who is an adept spellcaster. Focus-fire the Lost first, since he has lesser defenses and his spells are a serious threat, and manage your characters to move out of flame patches as best you can. You can use either one or two tanks here, as with good gear and talents one warrior should be able to survive both bosses' onslaught without too much trouble. Also, utilize the waterfalls. They can put flames out and protect you from the golem's fire attacks. Try running from one waterfall to the next while the golem is attacking you.

After the Lost dies, nuke the Inferno Golem. Utilize cold damage and armor-reducing effects in particular, and note that the golem is immune to critical hits and backstabs.

If you have two mages who have the spell Force Field, you can keep the Inferno Golem locked in place while you kill the Lost. The Inferno Golem will move one or two steps before the cooldown on the next mages Force Field has worn off. While fighting the Inferno Golem, if by any chance one of your mages gets targeted and pursued, run around with him in circles around the golem while the rest of the party nukes him. He is very slow and should be unable to catch you.

As with any fire-related enemy (e.g. Rage demon) the Inferno Golem is vulnerable to frost damage and uses fire damage to the exclusion of all else. Its damage can be nullified using a Greater Warmth Balm and any and all frost spells or runes should be used.

Anders is a good party member to have in this battle, as he can unleash Elemental Mastery, Storm of the Century and ice weapons; the Juggernaut Armor set the Hirol and having flame charms and the Ring of Ages equipped; if Oghren tanks, the battle is simple As the Inferno Golem will follow around Oghren but can't seriously damage him if his Constitution is over 30. Meanwhile, have Anders use ice spells like Winter's Grasp, Cone of Cold and Blizzard if Oghren is using Indomitable; in the meantime the Warden and Sigrun should be able to kill the Lost easily and after that it doesn't take too long for the Inferno Golem to fall. A good way to increase armor penetration is to use Telekinetic Weapons and/or a Spirit Warrior with Beyond the Veil and Soulbrand active.

Despite its size and theoretical weight, the Inferno Golem can still be knocked down. Stone Fist is very useful for this purpose, as Stone Fist has short cooldown and does not allow a physical resistance check.

Of course, should the player have companion/strategy preferences other than those prescribed above, an imported warden who wore warden-commander set makes the entire encounter a cakewalk.

An Inferno golem with a darkspawn in its clutches.

A back shot of an Inferno golem 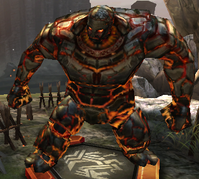