Guests of the Hold
A Cultured Exchange

In Exile is a side quest from the Jaws of Hakkon DLC for Dragon Age: Inquisition.

Sigrid Guldsdotten exiled herself from Stone-Bear Hold. Though Sigrid refuses to explain why, it may still be possible to discover the reason.

Speak to Sigrid the Exile who is found in a hut in western Frostback Basin, south of the Ridgeline Inquisition Camp.

Speak to the Augur in Stone-Bear Hold to gather more information about the reason for Sigrid's exile. He will explain to you that as an Avvar mage, Sigrid was possessed by a spirit but failed to let the spirit go during her offering ritual.

Head south from the Stone-Bear Hold where you will find a small ritual site. Examine the various hidden clues around the area to find out what happened, then return to Sigrid. She will then explain why she could not go through with the ritual. You then have a choice to let her confess to the Augur or to recruit her as an agent for the Inquisition.

Encouraging Sigrid to confess to the Augur:

Recruiting Sigrid as an agent yields: 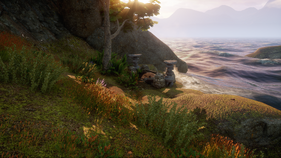 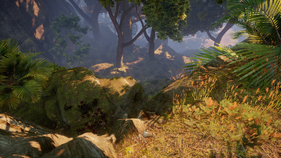 Ledge behind Sigrid Hut
Add a photo to this gallery
Retrieved from "https://dragonage.fandom.com/wiki/In_Exile?oldid=886581"
Community content is available under CC-BY-SA unless otherwise noted.