Hurlock emissaries have also been known to appear during a Blight. These darkspawn are the only ones recorded as being capable of human speech and are often capable of employing magic.

The emissaries are the only ones among the darkspawn that have been known to possess the ability to speak and communicate to other species, though topics of discussion with non-darkspawn races are rather limited. 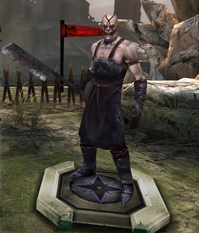 A Hurlock Emissary in Heroes of Dragon Age
Add a photo to this gallery
Retrieved from "https://dragonage.fandom.com/wiki/Hurlock_emissary?oldid=813427"
Community content is available under CC-BY-SA unless otherwise noted.