Start a Wiki
“I am a visionary. I've seen our destiny. I know what fate holds for the elves.”

Huon is an elven mage of the Kirkwall Circle of Magi.

Huon lived in the Kirkwall Alienage for a number of years with his wife, Nyssa. He was said to be a nice and caring husband. Unfortunately, the Templars found out that he was an apostate mage. They chained him and dragged him away in front of all his neighbors. For ten years, Huon lived in the Kirkwall Circle of Magi until he and a number of other magi destroyed their phylacteries and escaped. Huon was one of only three who managed to evade capture.

Huon is involved in the quest On The Loose.

After Knight-Commander Meredith asks Hawke to retrieve three magi that have escaped the Circle, Hawke follows Huon's trail to the alienage. There, Hawke finds Nyssa, who tells Hawke that after the Templars left, Huon returned and asked Nyssa to hide him. Nyssa was scared and told Huon to leave. Huon did as Nyssa asked, but Nyssa fears he may return. At night, Hawke returns to the alienage just as Huon stabs Nyssa, planning to use her blood to show the world "true elven power" using blood magic. Huon sees Hawke and summons shades and demons, forcing Hawke to kill Huon. 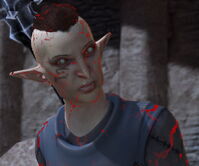 Huon summons a shade
Add a photo to this gallery
Retrieved from "https://dragonage.fandom.com/wiki/Huon?oldid=627643"
Community content is available under CC-BY-SA unless otherwise noted.