“For generations, your family, the Couslands, has stewarded the lands of Highever, earning the loyalty of your people with justice and temperance. When your country was occupied by the Orlesian Empire, your father and grandfather served the embattled kings of your land. Today, your elder brother takes up House Cousland’s banner in service to the Crown—not against the men of Orlais, but against the bestial darkspawn rising in the south.”

The Human Noble Origin is one of six origins available in Dragon Age: Origins. This character begins as the child of the Teyrn of Highever, one of the most powerful nobles in Ferelden. The default name is "Aedan Cousland" if male, "Elissa Cousland" if female. Rogue and Warrior humans start with this origin. For human mage characters, see Magi Origin.

“Some lands are ruled by men and women who believe that they have been elevated to their rank by the Maker Himself, but in Ferelden, rulers must earn their place. The nobility is not suffered gladly, as the Orlesian Empire discovered to its dismay when it attempted to occupy the land.

The Couslands have stewarded the lands of Highever for many generations, dating even to before Ferelden's first king was crowned. They have persevered so long because of their reputation for justice and temperance, as well as their willingness to lead men into battle. With the rise of the darkspawn horde in the south, it thus falls on the Teyrn of Highever to send out the call once again: duty demands that an army be sent to King Cailan's aid at once.

As the Couslands will quickly discover, however, the evil horde to the south is not the only darkness in Ferelden; treachery stalks the halls of Castle Cousland as well.

As a young scion of the Cousland family, the duty of carrying its banner will fall to you. Will you live up to your family's proud heritage? Or will you forge your own path, and damn the consequences?”[1]

Teyrn Bryce Cousland and his oldest son Fergus are preparing to heed King Cailan's call to battle darkspawn at Ostagar. Arl Rendon Howe of Amaranthine waits for his forces to join the teyrn's at Highever. The tardiness of Howe's men is being discussed in the main hall as Fergus' younger sibling (the PC) enters; they are greeted by Arl Howe and Teyrn Cousland, and introduced to Duncan, a senior Grey Warden. Duncan explains his mission and suggests that the PC would be a promising recruit—already knowing this idea will be dismissed by Teyrn Cousland. After being tasked with instructing Fergus to depart immediately with the bulk of the Cousland forces, the PC is intercepted by Ser Gilmore, a knight in Highever's service; Teyrna Eleanor Cousland, the PC's mother, wishes them to collect their dog from the kitchens. After finishing both tasks, the PC heads for bed.

In the night, Arl Howe's "late" men unexpectedly turn on the Couslands, and seize the castle. The PC wakes up, fights a way out of their bedroom, and finds Eleanor, who explains that the teyrn is missing. A quick search will reveal Fergus' son and wife murdered. Teyrna Eleanor, saddened and outraged, suggests retrieving a family heirloom or two. In the main hall, Ser Gilmore, directing the few remaining defenders, says Teyrn Bryce has headed for the kitchen.

In the pantry they find Bryce, gravely wounded and unable to move. Duncan fights his way in and asks to recruit the PC. Bryce relents, wanting his youngest child to tell Fergus what has happened. Duncan offers to save Eleanor too, but she refuses to leave her husband's side, and they are both killed as Duncan and the PC escape.

Mischief in the Larder

In addition to those selected by the player at character creation, a Human Noble Warden automatically begins with the following:

Combat Training and either

The PC travels with Duncan to Ostagar, where they are greeted by King Cailan. The king mentions that Fergus is in the Korcari Wilds on patrol, but there is no opportunity for the PC to seek him out. (The fate of Fergus is not revealed until the Epilogue.) When the PC first arrives at Ostagar the achievement Last of Your Line will be awarded. 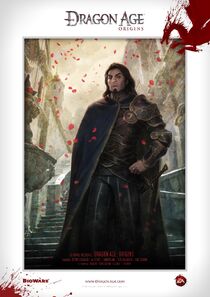 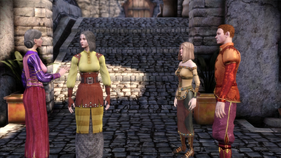 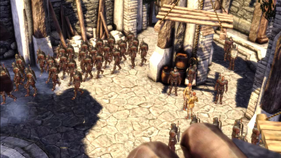 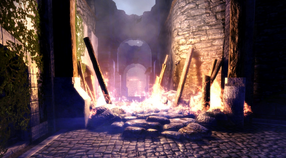 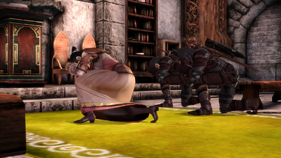