The Hissing Wastes is a large stretch of desert in western Orlais.

The sun burned above oceans of sand, but in the sand was Stone, strong and true. Fairel hewed the Stone, and built—as great as any thaig in the deep. And with his sons' help, he ensured the thaig prospered and grew. Fairel, Paragon, fled from the strife his brilliance created, the strife that destroyed thaigs, sundered houses, from weapons that clan used against clan. His own clan and his two sons followed Fairel to the pitiless surface, the surface where they would hide from the war that took their home.

After many years Fairel, greatest of Paragons, could not bear life's burden. And with the burden growing, he called his sons to his bedside. He bade each son swear he would take care of his brother, and the brothers swore, and mourned when their father returned to the Stone. Fairel's sons built monuments to their father, locking away his great works, and worked together, for a time, side by side. Each ruled half the thaig, but each ruled differently. They argued, and heated words made the brothers duel, and where one brother fell, the other raised bloodied axe in hand, alone.

This is the tale of Fairel, Paragon among Paragons, father of two sons, who, against their father's wishes, fought from foolish words and foolish pride. For pride these halls were made—to honor a father's deeds, and grieve his loss. And for loss these halls were made, to honor a brother mourned. A father taken by time, a brother dead by my own hand. With this work behold my grief, in Stone and shifting sand.[1]

The Hissing Wastes is a stretch of sandy desert north of the Western Approach, a lonely place where the wildlife is hungry and hostile. Among the hungriest and most hostile are the dragons that make their nests here. The rare person wandering into the wastes is either hunting prized beasts or hoping to uncover evidence of a long-vanished civilization in the dunes.

—Excerpt from the quest journal.

Tessa Forsythia and Marius are sent to the Hissing Wastes to deal with Venatori excavating the ruins. Unable to deal with the problem, Tessa asks Charter to send additional support. This support comes in the form of Dorian Pavus and some of the Bull's Chargers led by Krem. Their main target is a camp of fifty Venatori. While Dorian and Marius provide a distraction, Tessa frees the captive slaves; once all the slaves are clear, Rocky, the Chargers' sapper, brings the cliff wall down on the camp, killing the remaining Venatori.

During the conflict between the Elder One and the re-established Inquisition, the Venatori establish a significant presence in the Hissing Wastes. Thousands of years ago, Paragon Fairel fled to the surface with his clan to escape a catastrophic civil war among the dwarves waged with his inventions and founded Kal Repartha, the only known thaig built on the surface. The Venatori are searching the ruins of the long-abandoned colony for the powerful runes that Fairel created by excavating his tomb.

According to Solas, the Hissing Wastes used to be a lush forest, before encroaching sands destroyed the trees' roots. Exploring the Hissing Wastes and establishing Inquisition presence will reduce that of the Venatori and the Red Templars. To unravel the reason for the Venatori's presence in the desert the Inquisitor can access to the Wastes by completing the Stop Venatori Activity in the West war table scouting operation in Skyhold.

Note: The 12 regions below make up the Regions in the Wastes collection. Discovering them all grants 500 Influence.

Notes on the Wastes

Rifts at the Sunstop Mountains

Rifts near the Canyon

Rifts near the Cove

Rifts near the Sand Crags

Artifact Requisition in the Wastes

Lazurite Survey in the Wastes

Nevarrite Survey in the Wastes

Relief Requisition in the Wastes

Shelter Requisition in the Wastes

Flames of Our Lady - search northwest of the Sunstop Mountain Inquisition Camp in the quarry structures.

Landmarks in the Wastes

Shards in the Wastes

Dwarven Banner - in the tomb located in The Canyon, or obtained from The Vaults of Valammar in the Hinterlands.

Dwarven Banner Crown - in the tomb located at the Burial Grounds, or obtained in Daerwin's Mouth on the Storm Coast.

Tevinter Banner Crown - in a chest in a small camp beside a large rock, close to the Golden Oasis, north east of the Canyon Inquisition Camp.

Fire Rune Schematic - found in a tomb east of the Mountain Fortress Inquisition Camp; see side quest The Tomb of Fairel.

Armor of the Knights-Divine - looted from the Sandy Howler high dragon.

Bloodwake - dropped by a Venatori Overseer at the Venatori Camp located in the Sunstop Mountains; see side quest Sand and Ruin.

Helm of the Drasca - available at the Canyon Merchant for 6103

Masterwork Battlemage Coat - randomly available at the Canyon Merchant for 8121

Masterwork Battlemaster Coat - randomly available at the Canyon Merchant for 14212

Masterwork Prowler Coat - randomly available at the Canyon Merchant for 8121

Robes of the High Keeper - looted from the Sandy Howler high dragon.

Superb Belt of Melee Defense - looted from a chest within the Sunstop Mountain Tomb; see side quest The Tomb of Fairel.

Superb Ring of Attack - looted from a chest within the dwarven tomb located near the Sand Crags Inquisition Camp; see side quest The Tomb of Fairel.

Superb Ring of Critical Damage - looted from a chest within the Burial Ground Tomb; see side quest The Tomb of Fairel

Superb Ring of Guard Penetration - looted from a chest within the Canyon Dwarven Tomb; see side quest The Tomb of Fairel.

Superb Ring of Sundering - looted from a chest within the Colossus Tomb; see side quest The Tomb of Fairel.

Codex entry: The Colossus of Orlais

Codex entry: Demons of the Stone

Venatori Orders (to Members of the Venatori) 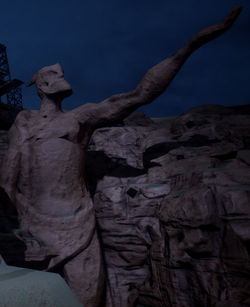 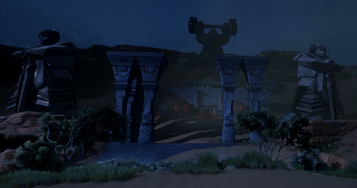 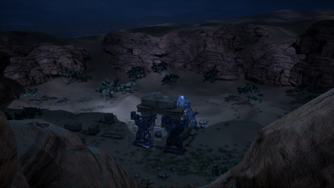 Silhouette of the Sunstop Mountains 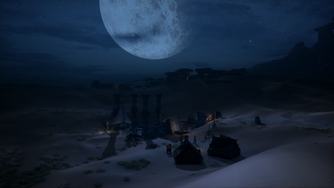 Inquisition camp in the Sand Crags 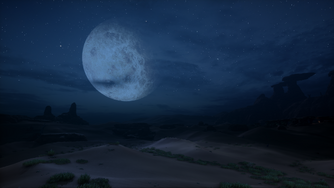