The Hinterlands is a region in Ferelden located between the fortress of Ostagar and Redcliffe.

“Fereldans are a puzzle. As a people, they are one bad day away from reverting to barbarism... if you insult their dogs, they are likely to declare war.”―Empress Celene I [1]

The Hinterlands comprises a good deal of fertile agricultural land and as such is populated with a great many farmsteads throughout the area. The regions' main settlement is Redcliffe Village, situated in the western hills of Ferelden protected by Redcliffe Castle. Since the end of the Fifth Blight, the Hinterlands have seen an influx of settlers from Redcliffe Village looking to escape unpleasant memories of the darkspawn and the other dark events which befell Redcliffe during the last Blight.

Nestled in the heart of Ferelden are the old forests and farmsteads of the Hinterlands. This rocky, rolling getway to Redcliffe has now fallen into chaos. The conflict between mages and templars forced many off their lands, demons stalk the hills, and reports of strange magic abound near Redcliffe.

I retired to the Hinterlands for peace and quiet away from the politics, and because the wide open spaces were perfect to let my horses run. Instead, the war between the mages and the templars has turned your beautiful hills into a series of burning battlefields. The farmers who live in the Hinterlands are good folk. Many of them left Redcliffe village because they couldn't bear to be there anymore, not after the Blight and the walking dead left so many bad memories. Now we've got apostates running around setting fire to anyone who looks at them sideways, and templars looting houses and cutting down those who protest as mage sympathizers.

Ever since the outbreak of the Mage-Templar War, the Hinterlands has suffered from ongoing confrontations between apostate mages and rebel templars. The local population has been victimized from attacks by both sides. The Inquisitor travels to the Hinterlands to seek out Mother Giselle, who has been tending to refugees in the region, in an attempt to gain some Chantry support. The Inquisitor can also restore order to the region by helping the inhabitants in a variety of ways, including putting an end to the Mage-Templar conflict in the region.

Ocularum shards, which had remained hidden in plain sight until the Breach disrupted the magic that kept them hidden, are scattered about the Hinterlands.[3][4] After the discovery of a workshop on the Redcliffe docks, the origins of the Ocularum can be traced back to the Venatori, who have been killing tranquil mages to use their skulls to uncover the shards. After obtaining shards, the Inquisitor can look into the significance of the shards collected and why the Venatori are so interested in acquiring them.

The Inquisitor also finds themselves investigating an abundance of mercenary activity in the region.[5][6] This leads to the discovery of an underground lyrium smuggling operation run out of Valammar, an ancient hidden thaig, by the Carta.[7][8]

Note: The 29 regions below make up the Regions in the Hinterlands collection. Discovering them all grants 200 Influence.

Horses for the Inquisition

Letter from a Lover

Map to a Waterfall

Praise the Herald of Andraste

A Spirit in the Lake

Templars to the West

Rifts at the Foothold

Rifts in the Woods

Rifts on the Farm

Rifts on the Outskirts

Butterbile 7:84 - search the table in the rounded house behind the locked door; see side quest Blood Brothers.

The Fall (12 pieces) - see the Fall mosaic for detailed locations.

Shards in the Hinterlands

Dwarven Banner - looted from a container in The Vaults of Valammar. (Can also be obtained from "The Canyon Tomb" in the Hissing Wastes.)

Ferelden Banner - looted from a large chest in the room directly across from the Grand Forest Villa's main entrance; see side quest The Mercenary Fortress.

Hero in Every Port (Ballad of Nuggins) - acquired from a book behind One-Eyed Jimmy's shack in Redcliffe Village.

Frost Rune Schematic - in the elven ruin located in Dead Ram Grove (labeled Dungeon Entrance on the World map, the entrance is located northwest of northernmost astrarium and northeast of the Maferath Repentant landmark).

Masterwork Vanguard Armor - looted from the Mercenary Leader at the Grand Forest Villa; see side quest The Mercenary Fortress.

Pitch Grenade Recipe - found in the room hidden by the destructible wall on Valammar's Upper Terrace.

Rock Armor Recipe - acquired from the side quest Sketch of Calenhad's Foothold.

Stormbreak - available at the Crossroads Merchant for 439

The Sweetish Fingers - looted from the elite Templar Knight on the western side of the Templar Encampment; see side quest Templars to the West.

Wrath of Lovias - looted from the elite Rebel Mage; see side quest Apostates in Witchwood.

Codex entry: The Circle of Magi

Codex entry: Ferelden After the Blight

Codex entry: Hero in Every Port (Ballad of Nuggins)

Codex entry: A Letter from the Carta

Codex entry: The Lost Art of Veilfire (if veilfire is used)

Codex entry: Map to a Waterfall

Codex entry: A Page from a Journal, Edges Scorched

Codex entry: Seers and the Allsmet

Codex entry: The Troubles of a Chantry Scholar

Codex entry: An Unsigned Letter in the Hinterlands

A Letter at an Abandoned Campsite

A Letter Found on a Corpse (Hinterland Who's Who)

A Letter Found on a Corpse (Playing with Fire)

A Letter Found on a Dead Body (Conscientious Objector)

A Letter Found on a Dead Body (Return Policy)

A Letter Found on a Dead Dwarf (Broken Bridge)

A Letter Found on a Dead Dwarf (Smuggler's Cave)

A Letter Found on a Dead Templar (Business Arrangements)

A Letter Found on a Dead Templar (My Lover's Phylactery)

Letter Found on a Noblewoman's Corpse

A Letter in an Abandoned Home

A Letter in an Empty Home (Safeguards Against Looters)

A Letter in an Empty Home (Blood Brothers)

Letter on a Bandit in the Hinterlands

Personal Note Scrawled in a Ledger

Report on Activity in the Hinterlands

An Unsigned Letter on a Bandit Body

A Prayer to the New God

Studies on the Blight

Merrill: We… we heard the Dalish were given land in Ferelden. Is it true?
Alistair: Yes. I wish I could say that went better.
Merrill: Why? What happened?
Alistair: It’s… a long story. I intend to make it up to your people, however. I owe an old friend of mine too much to do otherwise. 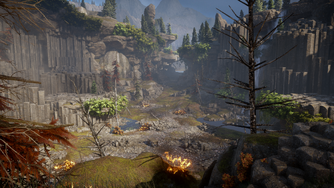 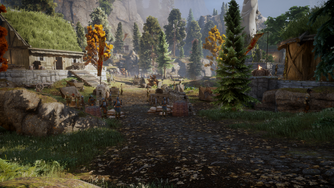 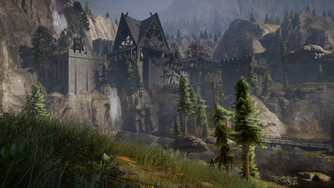 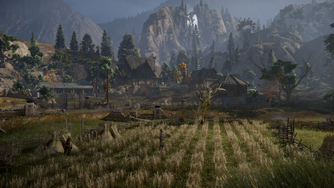 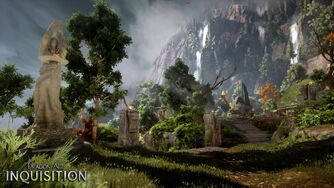 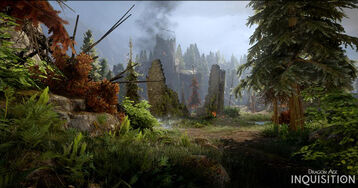 Promotional image of the Hinterlands