Hightown is the wealthy district of Kirkwall. As its name implies, it sits on the higher part of the city.

At the height of the Tevinter Imperium's slave trade, Kirkwall's elite prospered beyond dreams of avarice. Hightown was built for the wealthiest slavers, its glitzy mansions rising atop a great wall of rock that borders, on one side, the Waking Sea. Lowtown cowered on its other side until Kirkwall's slaves rose to plunder and destroy Hightown's riches.

Today, Hightown's prominent buildings are the Keep, home to the ruling viscount, and the chantry, home to the grand cleric and the city's religious center. Both are converted estates that once housed wealthy magisters, rebuilt and converted after the uprising.

—From In Pursuit of Knowledge: The Travels of a Chantry Scholar, by Brother Genitivi
—From Codex entry: Kirkwall - Hightown

Everyone who is anyone in Kirkwall lives in Hightown, and they give little thought to what goes on in Lowtown other than to complain when the wind drags up the stench from its foundries or ancient mines. People in Hightown feel safe, not because the city's walls are impregnable, but because an invader would need to scale the stairs from Lowtown in order to reach them. Many bloody battles have been fought on those narrow stairs, and in several wars Hightown has held out for months after Lowtown was taken. The wealthy often forget, however, that those stairs are also their only escape.

In the lowest alley of the district, several merchants peddle their wares. In a higher alley, the Dwarven Merchants' Guild is headquartered with one street leading to the Blooming Rose and the other to the Viscount's Keep and the Hawke Estate. The street eventually leads to the Kirkwall Chantry. A small staircase from there leads to the several estates of Kirkwall's elite. Although Hightown is a tranquil section of Kirkwall during the day, many gang operations surface during night time: Hightown is a center for many criminal factions.

A Friend in the Guard

Get Back to Work

Seal of the Old God Dumat

The Seal of House Talwain

The One True Pantaloons

A Murder of Crows 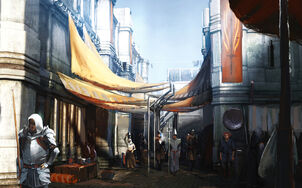 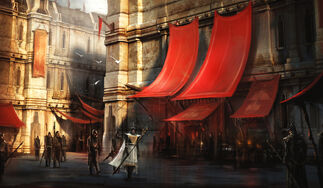 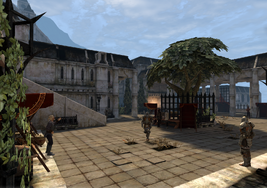 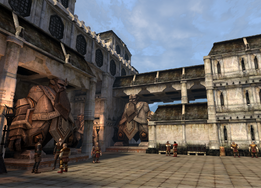